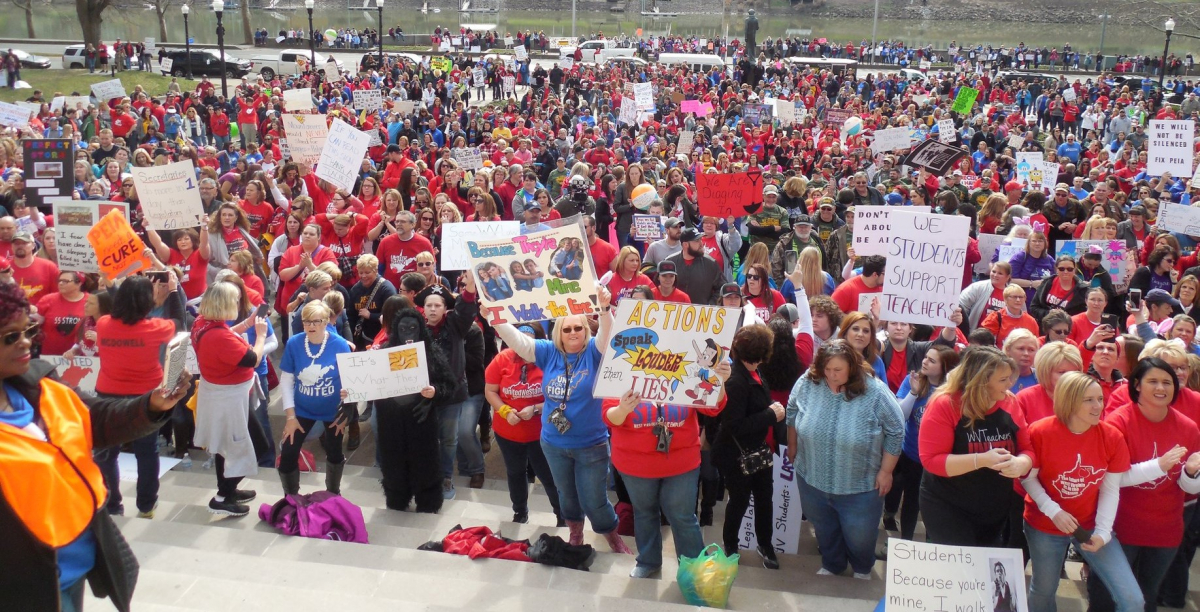 In the wake of West Virginia, teachers in Oklahoma, Arizona, and Kentucky are now striking, sicking out, rallying, and Facebooking to push officials to raise their salaries and defend their benefits. Photo: WVEA

It started with a few hundred West Virginia teachers and school employees pulling one-day walkouts. It became an unqualified victory in that state, which educators elsewhere were quick to emulate.

Teachers in Oklahoma, Arizona, and Kentucky are now striking, sicking out, rallying, and Facebooking to push officials to raise their salaries and defend their benefits.

After 13 days on the picket line, West Virginia teachers won a statewide across-the-board 5 percent raise, plus a task force to find a permanent fix to the state’s underfunded Public Employees Insurance Agency. Other state employees will get the same raise. (See box at bottom for more.)

By the time the teachers went back to work March 7, the whole world was watching. National and international press showed a sea of red shirts and bandannas flooding the statehouse. Before the strike was over, teachers in Oklahoma, Arizona, and Kentucky had formed Facebook groups that gathered tens of thousands of members, with rumblings of walkouts and other job actions spreading.

Five states have seen average teacher salaries decline since 2015-2016; West Virginia, Oklahoma, and Arizona are three of them.

In Oklahoma, the big, open Facebook group has a simple name: “Oklahoma Teacher Walkout—The Time Is Now!” Leaders of the group floated a walkout date of April 2, the start of statewide testing. Some teachers had already begun organizing sickouts.

The Oklahoma Education Association, which initially set a strike date three weeks later, agreed to move the date up after an outcry. Teachers are now set to walk on April 2 if the legislature doesn’t grant a $10,000 raise for teachers and a $5,000 raise for school support staff.

It’s been a decade since Oklahoma teachers got their last raise. According to the Bureau of Labor Statistics, pay for educators there ranks last in the country, with high school teachers averaging $42,460.

As in West Virginia, teachers are emboldened by a shortage of qualified educators. “Teachers are fleeing the state,” said Molly Jaynes, a third-grade teacher in Oklahoma City. “You can go to Arkansas and make $15,000 more; you can go to Texas and make $20,000 more”—as did Oklahoma’s 2016 Teacher of the Year. The state issues hundreds of emergency certifications every year to anyone with a bachelor’s degree.

Teachers have sought support from superintendents, and gotten it (also as in West Virginia). Superintendents, frustrated with high turnover and lack of funding, have promised to shut schools for the first four days of a walkout, at least, which would mean teachers would make up the days later, but would be paid.

Beyond that, it remains to be seen. “This is a state that can’t keep teachers,” says Jaynes. “What are they going to do, fire everyone who goes on strike?”

Arizona teachers signed up in droves for a new Facebook group, “Arizona Educators United.” Thirty thousand joined in its first 10 days. Teachers there are building a grassroots “Red for Ed” movement, spreading photos of themselves wearing red T-shirts to school every Wednesday and assembling en masse at legislative hearings at the Capitol.

One of the group’s first big actions was a hundreds-strong picket outside Governor Doug Ducey’s weekly radio appearance. Ducey, the multimillionaire former CEO of Cold Stone Creamery, has dismissed the movement as a partisan ploy. He’s up for reelection in November.

A strike has yet to be called in Arizona. But the first shutdowns came on March 21, when sickouts closed nine Phoenix elementary schools.

“I was fed up with buying materials out of my own pocket and tired of living paycheck to paycheck,” said Kassandra Dominguez, a dual-language teacher at Sunset Ridge Elementary who pushed the sickout idea, along with her co-teacher. Within a few hours, other teachers in the building agreed to join in, and soon, nine schools were on board. The organizing had taken less than 24 hours.

With five years’ teaching experience and a master’s degree, Dominguez makes $38,000. When cost of living is factored in, some measures rank Arizona last in teacher pay.

The next big day of action is a march on the Capitol March 28, alongside the Arizona Parent Teacher Association and the grassroots group Save Our Schools Arizona.

“Teachers are fired up here because we actually have momentum,” said Rebecca Garelli, a math and science teacher in Phoenix. “I heard a lot of comments: ‘I think it’s going to stick this time. I think this time it’s for real.’

The latest state to join the strike talk is Kentucky, where the fight is about pensions and funding cuts to schools. Having systematically underfunded pensions for over a decade, the legislature is now pushing to cut cost-of-living adjustments for teachers and other employees. Like teachers in 14 other states, Kentucky teachers do not collect Social Security, so they rely entirely on the state pension system.

The Kentucky Senate has introduced a budget that would cut funding for family resource centers in schools and for pre-K while increasing money for charter schools. Teachers who retire before 65 would pay more for health insurance.

Thousands of active employees and retirees have been rallying at the Capitol. Teachers are organizing walk-ins at schools to educate parents and build community support.

On March 21, teachers coordinated with their superintendents in seven districts in eastern Kentucky to close schools so they could mobilize to the state capital.

The state’s Republican Governor, Matt Bevin, has said protesting teachers have a “thug mentality,” a comment that only fired teachers up, said Nema Brewer, a founder of the Facebook group KY120 United, which has 32,000 members.

To date, the union has yet to call for a statewide walkout, which Brewer thinks is a mistake.

“The teachers at the grassroots are fired up and serious about striking, but the union is being overly cautious,” she said.

So KY120 United has organized a statewide structure to facilitate walkouts in all 120 of the state's counties.

“We think we have every county covered now. We don’t have every school covered, but we are close.
As in West Virginia, teachers are thinking about their students who receive free lunches. "We have asked people to collect food in case we have a work stoppage,” Brewer said. “We want to make sure that our children are taken care of."

The West Virginia strike started with a walkout and caravan to the capital by teachers and school employees in three counties in the south of the state. Mingo County was among them.

“Somebody said, ‘Are you really going to the Capitol with just three counties?” said Katie Endicott, who’s taught there for 11 years. “I said, ‘Yeah, we are—and we’re not leaving.’”

When the legislature didn’t respond, the two-day walkout spilled into a five-day walkout. Then, on the evening of February 28, the governor announced a settlement: teachers would get 5 percent, other public employees would get 3 percent, a task force would deal with PEIA, the public employee health insurance system, and everyone would go back to work.

WVEA President Dale Lee told the crowd gathered on the Capitol steps, “We reserve the right to call you back out as we need to.”

But teachers and school employees had other ideas. They erupted with chants of “55 united!” (for the 55 counties), “Fix it now!” and “Back to the table!”

“After the unions announced the deal with the governor, we were kind of upset,” said Ashlea Bassham, an English teacher in Logan County. “This was for not just teachers—the fact that this was 5 percent for some and 3 percent for others, we didn’t like that idea.”

Others didn’t trust a verbal commitment from the governor, and wanted the deal passed by the legislature.

So the strike was not over. For another four working days, teachers and public employees gathered at the Capitol and on picket lines, chanting, singing, and urging the legislature to do the right thing.

It paid off. The headline in the Charleston Gazette read simply, “Teachers Win.”

“A battle has been won in a long war,” said Leah Clay Stone of Logan High. That war soon spread from the mountains to the deserts.

Meet West Virginia, Arizona, and Kentucky teachers at the 2018 Labor Notes Conference, April 6-8 in Chicago. We hope Oklahoma teachers, set to strike starting April 2, will join us too! Chris Brooks contributed to reporting on this story.