Allina Nurses Go All In 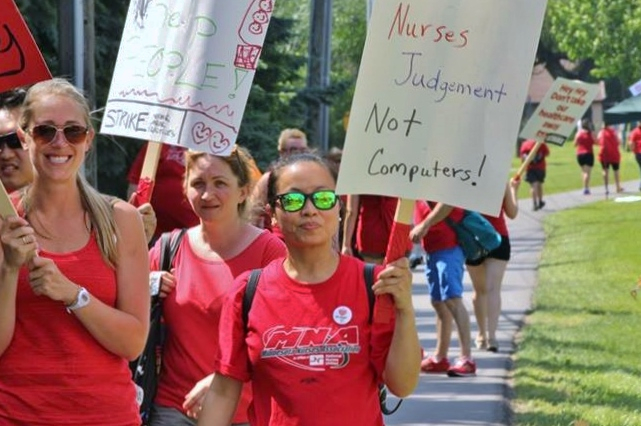 In a weeklong strike, 5,000 Minnesota nurses are defending a health plan that's an oasis of decency—and battling the hospital chain's cost-cutting scheme to hand over staffing decisions to a robot. Photo: Minnesota Nurses Association

Sometimes solidarity comes shaped like a popsicle. That’s what one nursing assistant, on her way in for the evening shift at United Hospital in St. Paul, delivered to nurses picketing in blazing 95-degree heat.

Five thousand members of the Minnesota Nurses (MNA) walked out June 19, kicking off a weeklong strike at five Allina hospitals in the Twin Cities. The immediate sticking point is health insurance, but this is also a showdown over nurses’ power on the job, as Allina pushes to hand over staffing decisions to a robot.

The company’s unwillingness to budge an inch “leads me to believe they really are trying to get rid of the union,” said 30-year nurse Gail Olson, a bargaining team member. “For patient safety sometimes we slow things down. They don’t want to tolerate it anymore.”

“If we don’t stare Allina down, all these things we have right now will be gone,” said post-anesthesia nurse Theresa Swehla. “If we give in on insurance, they have no incentive to bargain with us on any other issue.”

The strikes vary in demands and length, but syncing them up maximizes the impact by squeezing the supply of scabs. Hospitals pay through the nose to fly in replacement nurses from around the country and put them up in hotels. Allina offered $400 travel bonuses, to boot.

Despite the heat—and Father’s Day—nurses reported a strong first-day turnout, with 600 walking the lines at the largest hospital, Abbott Northwestern. The bargaining team is asking everyone to picket at least as many hours as she or he would have worked this week.

The first morning, many showed up early to support the night nurses coming off their final shift. A nurse’s last daily task is to give a “report” on each patient to the nurse who’s taking over duty. Those working that night had the unsettling, sometimes emotional experience of handing their patients over to the care of scabs.

Then security guards walked them out as a group—and they had to move their cars out of the hospital’s parking before joining the picket lines. A church across the street from Unity Hospital is letting nurses park there, now that the Sunday rush is over.

Another sympathetic neighbor volunteered his shady yard, where the nurses have set up coolers of water, a barbecue, even a porta-potty.

“The generosity of this man is unbelievable,” said Swehla. “But his wife was a patient at Unity—and because of the excellent care she received, he’s more than happy to support the nurses.”

“We’re getting a lot of support,” Swehla said. “People are driving by honking and waving. There must be some Teamster trucks, because every time a semi goes by….” She mimicked a double blast of a truck horn.

Minneapolis-St. Paul saw a giant nurse strike six years ago, when 12,000 nurses at 14 hospitals walked out for a day, defeating an attack on their pension. The hospitals ducked a rematch in 2013, agreeing to bargain over wages only.

Five out of six hospital chains did the same thing this year, and quickly reached three-year deals with raises of 2, 2, and 2 percent. So Allina nurses are out on their own. The upside is that their pension is safe—Allina can’t force it open without the other chains’ cooperation.

But this time the company is after their health insurance. Over the years the nurses have sacrificed on other issues to maintain good health plan options, with zero deductibles and low or no co-pays.

Meanwhile the national trend is barely-there health plans, where the deductibles and co-pays are getting so high, it’s almost like not having insurance at all. That’s the kind of plan Allina wants to push the nurses into, and the kind its service and tech employees already have—a “crappy corporate plan,” as Quarles puts it.

Olson and Swehla both know co-workers on Allina’s plans who’ve been hounded by bill collectors or come near to bankruptcy. “And that’s with health insurance,” Olson said. “It’s disgraceful.”

MNA has defended an oasis of decency. Olson’s son, now 23, was diagnosed with diabetes at age 13. His routine medical supplies, which would rack up large bills on Allina’s plan, cost her just $11 co-pays. “It has kept my son out of the hospital, because of the care we’ve been able to give him with this plan,” she says.

“Allina says it’s unfair that only the nurses get better plans,” Quarles said. “We said other employees could also move into these plans. They didn’t go for that suggestion.”

The strike is over alleged unfair labor practices, which gives the strikers legal protection against being permanently replaced. Nurses charge that the company is refusing to produce information about the health plans—and refusing to respond to the union’s proposals on any other issue, including staffing, education, and workplace violence.

On staffing, the nurses have backed off their opening proposal for guaranteed nurse-to-patient ratios. They’re still asking that the charge nurse (an experienced nurse who runs the unit, assigns patients, and acts as a resource for other nurses) not be assigned patients herself, and that each department and shift get a break nurse to relieve the others.

“There is a problem with nurses not getting their breaks,” Olson said. “We now have a break room in almost every unit, because people don’t feel comfortable leaving.”

Allina wants nurse staffing determined by computer, based on patients’ electronic records. The union objects to removing charge nurses’ judgment from the staffing equation. Charge nurses consider factors not documented in a chart—family and psychosocial issues, the intensity of nursing required, the experience and skill of particular nurses.

Besides, Swehla points out, the computer data may be out of date. “Nurses do first and chart later, because it’s more important to take care of the patient,” she said. “The input into the computer about a patient’s conditions may happen two hours after you’ve delivered the care. They’re deciding staffing in real time with this program—but we’re not charting in real time, because we don’t have the time.”

On workplace violence, the nurses’ demand is modest: they just want union representation on committees already created by state law.

But right now, Allina won’t even talk about these issues. “They say they’re unwilling to discuss anything with us at this point unless it involves transition off our MNA plans,” Quarles said.

“To me that’s not negotiating, it’s bullying,” Swehla said. “And they would never pull that crap, in my opinion, if we were men.”

Why is Allina pushing for computer-run care? One little-reported angle is the chain’s increasingly tight-knit partnership with the data analytics company Health Catalyst.

Investing in this fast-growing for-profit company is a lucrative opportunity for supposedly nonprofit hospital chains. Health Catalyst has raised hundreds of millions in venture capital and plans to go public next year. Besides Allina, its big investors include the other chains where NNU nurses are striking—Kaiser Permanente and Boston-based Partners Healthcare—and the University of Pittsburgh Medical Center, target of a long-running SEIU organizing drive.

Allina became the company’s first customer in 2008, and CEO Penny Wheeler sits on its board. In a $100 million deal last year, the hospital chain outsourced its data analysis staff and technology to Health Catalyst. Already Allina says it has achieved $43 million in “productivity improvements” from this deal.

Analytics might sounds wonky, but the underlying goal is straightforward. Electronic charting and billing generates a huge amount of data. Sophisticated computers give hospital executives a way to mine the data for anomalies in care—and opportunities to cut costs.

The approach will sound familiar to anyone who watched the “lean production” craze sweep auto manufacturing. Quality and savings are achieved by standardizing work into rote steps. Skill and individual judgment, which introduce unacceptable variation, must be ironed out.

Only those motions that produce quantifiable results—services the hospital can bill for, health outcomes it can tally up—count as productive. That leaves out, say, brushing a patient’s hair, comforting a family member, or mentoring a younger nurse.

Any downtime is waste. In auto plants, lean managers pushed to keep workers busy 57 seconds out of every minute. (Of course, this dramatically increased injuries like carpal tunnel.) Nurse productivity, according to Health Catalyst, can be measured in nursing hours per patient day. That ratio improves when you burden nurses with so many patients that they start skipping breaks to keep up with care.

Another scrutinized ratio is compensation versus total expenses, a number you might improve by reducing overtime—or by cutting nurses’ health insurance.

Correction: This article has been updated to reflect that the popsicles were at United Hospital in St. Paul, not Unity Hospital in Minneapolis.

Alexandra Bradbury is the editor of Labor Notes.al@labornotes.org
Related
Instead of Coal, These Nurses Gave Their Boss 900 Documented Incidents of Unsafe Understaffing »
Massachusetts Nurse Strikers Aren’t Blinking »
Viewpoint: Solidarity for the Tenet Nurses Strike Should Be Labor's Top Priority Right Now »
The National Guard Came to St. Paul to Repress Protests. We Kicked Them Out of Labor’s Hall. »
VIDEO: Health Care Strikes During a Pandemic »

When you enter a hospital, your best defense (sometimes your only defense) against the high probability of errors in a very complex system is a nurse who isn't worried about benefits, hours, working conditions, and all the rest of the things that effective organizing can get into a CBA. Striking nurses: Thank you! My wife survived CHF and DVT this year. She couldn't have done it without you!