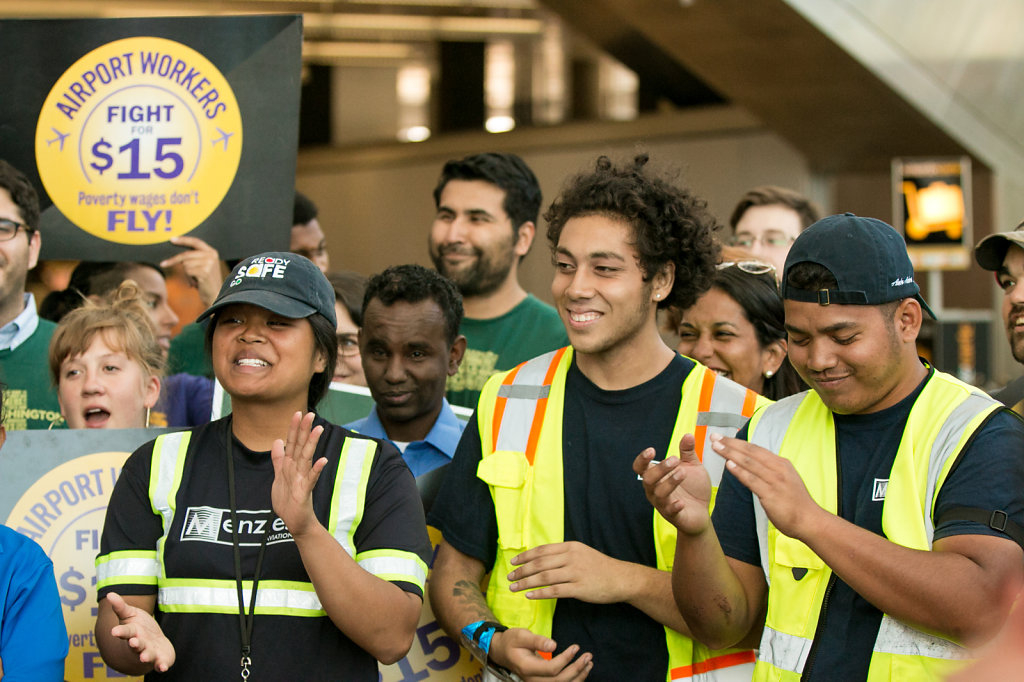 Everyone cares about something—but it might not be what you expect. Photo: Clay Showalter.

This is a preview of Secrets of a Successful Organizer, a forthcoming book from Labor Notes, to be released at our Conference on April 1. Sign up for our weekly email list for updates.

Do you ever feel like you’re the only one who cares about the union? Like none of your co-workers will lift a finger to help? Like your workplace is bogged down in “apathy?”

It’s a common gripe. In Labor Notes workshops we often ask union members to make a list of the reasons why people don’t get involved where they work. Typical answers include:

It might feel like your co-workers don’t care. But push a little bit, and that’s never really true.

Could it be that, for most of your co-workers, everything’s great at work? Maybe they’re completely secure about their jobs, love their supervisors, make excellent money with terrific benefits, have no worries about downsizing or layoffs, face no health hazards on the job, and are confident about their retirement. If so—quit trying to organize and get another hobby!

But it’s more likely that people are scared, or feel powerless and directionless.

They say everything is fine because they don’t believe it can change. Organizing is the antidote.

So when you’re assessing why more people haven’t stepped up to take on the boss, it’s important to look at your situation carefully, and find out what the actual reasons are. You have to diagnose the problem before you can write the prescription. It’s not apathy—but what is it?

Here are some ways to understand what looks like apathy, and to respond to it.

Everyone cares about something—but the something might not be what you expect. Pick out a few people at work who you’d like to know better. Make a point of talking with them, and find out what’s on their minds.

Maybe the drug testing policy that’s really grinding your gears isn’t at the top of their list because something else is bugging them more: a mean supervisor, a crushing workload, a safety hazard, a toothache and no dental plan, a shift schedule that means they hardly see their kids, being forced to defend a stupid policy to customers… The only way to find out is by listening.

Show them respect and understanding. When they feel that from you, they’re more likely to respect the things you care about. Step back from your frustration and look at things from an organizing perspective. This chart shows four common problems and how you can help your co-workers get past them.

Or maybe your co-workers are just as bugged by the drug testing policy as you are, but it seems too big to tackle. The boss has done a good job of putting out the idea that the decision is final—and fighting the inevitable sounds like a frustrating waste of time.

It’s perfectly reasonable that people feel this way, especially if their workplace has always felt powerless and disorganized. People are used to going along to get along. If your co-workers have never felt strength in numbers, or seen a group action change even something small, why would they believe they could change something big?

As an organizer, your job is to inspire your co-workers with a credible plan to win. But this doesn’t mean you have to be a great talker. Actions speak louder than words, and mostly you’ll need to “show, not tell” your co-workers that change is possible—that is, prove it to them, with action.

That usually means starting with small actions and issues at first—things you can win with the people you have so far, taking just a small step out of their comfort zone (farther each time). When it works, more people will be drawn in... and as they participate, their confidence will grow.

Hopelessness can be a strong habit. It’s easier to break a habit with group support. Bringing people together can help individuals get past their discouragement.

Have you asked them personally to do something specific? Most of us aren’t natural-born organizers. Many of your co-workers won’t initiate activity—but they will respond if asked directly by someone they trust.

Figure out some very small, specific requests, and personally approach a co-worker. At first this might be as simple as answering a survey, coming to lunch with other workers to discuss a problem, or signing a group letter.

Be respectful of time constraints in their lives, and show lots of appreciation for anything they’re willing to do. This attitude of respect will make them comfortable doing more in the future.

Think about how people are notified about meetings. An email or a notice on the bulletin board isn’t a good method. Personal, face-to-face invitations are the very best. Divide up your workplace and find several other people to share the work of inviting people individually.

And when people do come to meetings, the meeting had better be pleasant and productive—or they probably won’t be back! People are incredibly busy these days, and you will convey respect for their participation by planning a meeting ahead of time. Prepare a clear agenda, a timeframe for the meeting, and a reason to attend, such as a hot issue.

Most importantly, be patient, and don’t give up. Organizing is a marathon, not a sprint.

Think your workplace is disorganized? Think again. An organizer must learn to recognize the existing networks and natural leaders—who may be hidden in plain sight.

A version of this article appeared in Labor Notes #440, November 2015. Don't miss an issue, subscribe today.
Related
Inside the Alabama Amazon Union Drive: An Interview with the Lead Organizer »
Draw the Line in Permanent Marker: Three Organizing Principles »
Don't Guess What's on Your Co-Workers' Minds: Allow Yourself to Be Surprised »
How to Keep On Keeping On »
What Are We Doing to Shift the Balance of Power at Work? »