Will Grocery Workers Hold the Line For Part-Timer Health Care? 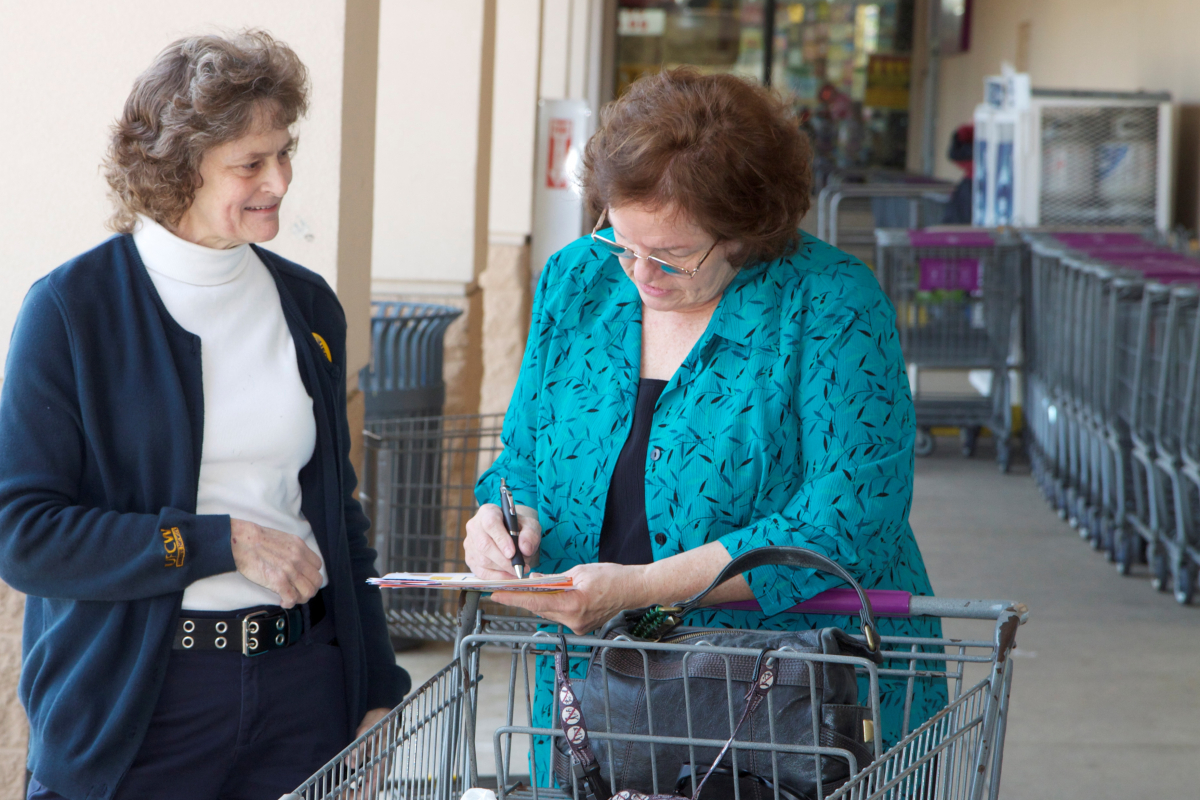 Grocery workers are asking customers to pledge not to cross the picket line if they strike. Photo: Karlyn Williams, UFCW 400.

“At first I was a little worried about approaching the customers,” said Vivian Sigouin, a Safeway food clerk in Virginia. But “when you mention health care and part-timers and retirees, any of that, it really hits everybody.”

She and fellow Food and Commercial Workers (UFCW) members are out in front of stores asking D.C.-area shoppers to sign a pledge not to cross picket lines at Safeway and Giant if they strike.

They’re fighting to keep everyone on their health care plan. The 17,000 workers have twice extended their contract to keep bargaining; it’s now set to expire December 20.

“It was a subject that everybody understood,” Sigouin said. “They all had a story to tell if you gave them a minute, about their mother or father that lost benefits, or didn’t have them.

“A lot of people say, ‘I know so-and-so who works at Walmart, so let me sign that card.’”

Obamacare: What to Watch Out For

A new report from the Labor Campaign for Single Payer explains the top 10 bugbears unions should guard against when bargaining health care—including the “Walmart loophole,” private exchanges, exclusion of immigrants (even those with papers), and more. Read details on all 10 here.

It’s the hot topic in grocery bargaining this year: with the Affordable Care Act’s insurance exchanges opening up an alternative route to coverage, will employers succeed in kicking part-timers and retirees off their plans?

After what Local 919 President Mark Espinosa called “the most difficult, complex negotiations I have been part of in my entire labor movement career,” 40,000 Stop & Shop workers in five New England UFCW locals agreed in March to exclude employees working less than 30 hours a week from their Taft-Hartley health fund.

In return the company is giving the part-timers cash to buy coverage on the exchanges and contributing to individual health savings accounts, and the locals are offering workshops to guide members into the new system.

But other grocery locals, such as Sigouin’s Local 400, are refusing to dump part-timers. Their brothers and sisters at area Krogers fended off similar concessions earlier this year.

Some 5,500 Stop & Shop workers in the New York metro area’s Local 1500 authorized a strike October 28 over the same issue. At press time they hadn’t walked yet, but might anytime. And health coverage for part-timers is a top issue in Local 1262’s talks with Stop & Shop and ShopRite in New Jersey and New York, too.

Already many grocery workers are part-time, including nearly 13,000 of the 17,000 Safeway and Giant workers in D.C.

For Mary Ann Schroeder, a 20-year Safeway meatwrapper in Seattle, that’s part of why the issue was worth striking over. “It’s a larger problem than it looks,” she said, because if employers had succeeded in making under-30-hour workers still cheaper to hire by eliminating their insurance, “everybody would have ended up with under 30 hours eventually.”

It’s because of Taft-Hartley benefit funds that so many part-timers in grocery have health coverage to begin with. Such a fund, jointly administered by employers and unions, creates a pool of members (workers, their dependents, retirees, and in some industries even out-of-work union members) big enough to act as its own insurance company.

Is the push to shrink the health plan rolls just the usual employer opportunism, or is the Affordable Care Act to blame? A little of each.

The ACA will increase the plans’ cost of offering insurance. It bans lifetime caps on benefit payouts, for instance, and requires plans to allow adult children up to age 26 as dependents. It also creates new fees for insurers, including the Taft-Hartleys.

More important, depending on family income, a part-time worker might be eligible for a government subsidy to help pay for coverage on the exchange. But the subsidy can’t be used to keep them on the union plan.

“That’s the outrage the Taft-Hartley plans are having,” said Mark Dudzic of the Labor Campaign for Single Payer. “If they throw these people out of their plans and have to go to the exchanges they’ll be eligible for subsidies—but if they continue to cover them through the plan, they get no subsidies.”

The same might be true even of full-time workers, whose wages can be pretty low the first few years. But workers with fewer than 30 hours a week have the bulls-eye on them first, because the ACA mandates no financial penalty to the employer for not insuring them. Neither does it require coverage for retirees and spouses.

“So we have to think of a penalty for any wrong thing that anyone can come up with, to prevent it from happening?” asked Seattle meatwrapper Mary Ann Schroeder.

Maybe so. UFCW is backing federal legislation, the Part-Time Worker Bill of Rights, that would impose a pro-rated penalty for employers who don’t provide health benefits for workers under 30 hours. The bill has made no headway in Congress.

Hepner has worked at Giant for 38 years. “When I started, my dad said, ‘Giant’s a good company with excellent benefits,’” she said. “At 18 I said, ‘What’s a benefit, Daddy?’”

She found out when her husband fell out of a tree. “He was in shock trauma for months. I didn’t pay one cent. My dad said, ‘That’s your benefits that I was trying to explain to you about.’”

Now her own daughter is full-time at Giant, too—and Hepner wishes she could tell her the same.

YOU’RE ON YOUR OWN

Giant and Safeway want to push not only part-timers but also retirees and working spouses off Local 400’s plan.

Because prior contracts introduced tiers, only those hired in 1983 or before are eligible for retiree medical—but those folks have been counting on it their whole careers. “They’ve taken little 10-cent, 25-cent raises all these years to maintain that,” said Sigouin, who just missed the cut-off. She started 28 years ago.

“I have a lot of retirees that are calling me and begging me, ‘Please don’t let us lose everything we have,’” said Hepner. “We built the company. We made it what it is today…. Several have called and said, ‘Do I need to go look for new health care?’”

Would it be such a disaster to switch over to the exchanges? The bottom line will vary from person to person, since eligibility for subsidies depends on family size and spouse income.

That’s the heart of the problem, says Mark Dudzic of the Labor Campaign for Single Payer, which just released a report on bargaining under the ACA.

“The traditional union model is a solidarity model for benefits: everybody’s covered under equal terms and conditions,” Dudzic explained. “The ACA accelerates the move to a consumer-driven model, where everyone’s on their own to cut the best deal they can with limited resources.”

Also, “there is no exchange in Virginia, and the federal one doesn’t seem to be working real well right now,” Sigouin pointed out.

Health care isn’t the only trendy takeaway grocery employers are pushing. The chains in both Seattle and D.C. proposed getting rid of premium pay for Sundays and holidays—an idea that made workers’ blood boil.

But Seattle workers held the line and took no concessions. It came down to proving to management that “we were totally prepared to strike,” said Schroeder, a member of her workplace contract action team.

She and her co-workers held button-wearing days, informational pickets, a near-unanimous strike vote, and signed everyone up for picket shifts. “People were hot to go,” she said.

The other key was rousing public support. As in D.C., workers leafleted stores and gathered shoppers’ pledges. Other unions and community groups joined rallies and even volunteered to help strikers with practical tasks, like driving kids to doctor appointments if picket duty interfered.

A countdown clock in a downtown Seattle park drew media attention to the impending strike deadline. Grocery workers won a contract with no concessions, stopping the clock with less than two hours to spare. Photo: UFCW 21.

A clever visual aid spotlighted the drama over the final days of bargaining. When it gave the 72-hour strike notice, the union set up a huge tablet with the numerals “7” and “2” at a park in downtown Seattle. Each hour someone would flip the page, ticking down the hours till the deadline. 71... 70...

“The cameras were on it all the time,” Schroeder said. “It was on all the local news. So it wasn’t just happening to us, it was happening to everybody.... The whole city knew.”

In an October 30 push, D.C.-area workers donned Rosie the Riveter polka-dot scarves (it was almost Halloween) and talked with shoppers at 30 stores.

They asked customers to hand the pledge card to a manager or cashier on their way out. Thousands have done so, Local 400 says—especially when the ask comes from a checker they recognize.

All the years the company has been insisting checkers greet shoppers and call them by name, “it’s coming back to bite them a bit,” Hepner said, “because now they’re our customers.”