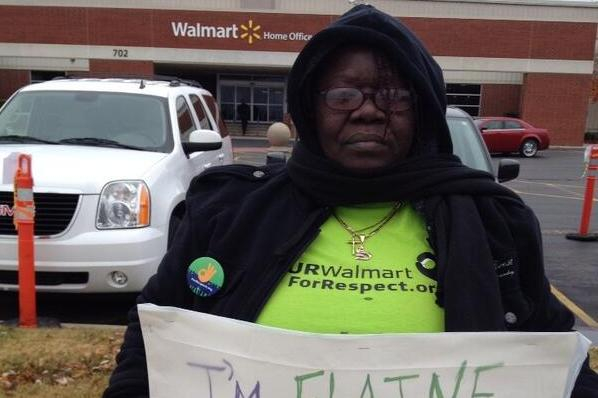 "I'm Elaine," declared one woman's sign. "8 yrs at [Walmart store] #1590, Miami, FL. Unjustly fired. Shame on you, corporate." Elaine (no last name given) and several others braved bitter cold to protest outside the company's Arkansas headquarters Friday. A series of strikes this week is set to culminate with big actions across the country on Black Friday. Photo: Making Change at Walmart.

Walmart workers are gearing up for Black Friday with a series of short strikes around the country this week, including in California, Florida, Minnesota, Washington, Ohio, and Pennsylvania. Many more actions are expected on Black Friday itself. (Click here to find one near you.)

OUR Walmart, the group planning the actions, hopes the biggest shopping day of the year will become better known as a day of action for retail workers. OUR Walmart is asking community members all over the country to participate.

“Be expecting things [on November 29]… but there’s nothing specifically I can mention,” said Los Angeles-area Walmart worker Anthony Goytia, noting that activists are trying to take their employer by surprise.

The Food and Commercial Workers union (UFCW), which started OUR Walmart, says 30,000 participated in Black Friday actions last year. Most of those were supporters; 88 were strikers, spread out among two dozen stores. Community members protested in Walmart parking lots across the country, and some made guerrilla forays inside the stores to chant, leaflet, or sing labor-themed rewrites of Christmas carols.

Dozens of short strikes have taken place in the intervening year—the longest was nine days—and more than 100 workers have experienced retaliation, with 20 fired.

In the largest strike to date, 80 workers in Hialeah Gardens, Florida, walked out October 18—surprising managers and OUR Walmart, which didn’t organize the protest. They were demanding 40-hour weeks (Walmart defines full-time as 34 hours) and protesting tyrannical managers.

Unlike most Walmart strikes where only a few workers walked out, the large work stoppage won handsome gains: 40-hour schedules, bigger raises, the transfer of a problematic manager, and even pay for the hours on strike. (Workers struck the same store in 2006, part of an earlier effort to organize Walmart in Florida.)

Last week the National Labor Relations Board finally charged Walmart with violating labor law, for the retaliations. But the Board, hoping to see a settlement, hasn’t yet gone to court. Walmart could agree to rehire the fired workers, but it’s more likely to fight the charges, which will begin a lengthy court process.

OUR Walmart has set up a website where workers can request Black Friday actions at their store. As of November 20 requests had come from 187 stores, many anonymous for fear of retaliation. Workers also answered “What would you like to see change at your store?”

A worker in Billings, Montana wrote, “Quit giving people unrealistic workloads just because a computer says that is what is supposed to happen; somehow the algorithm is wrong.”

Lucille in Muscle Shoals, Alabama, answered, “More associates hired. Running ragged for little pay with next to zero help. Lines stay backed up all day and customers are getting very angry.”

In Salisbury, Maryland, a worker identified as “cashier dude” wrote: “I was receiving unemployment before I was offered a job at my store. I had to go on food stamps and Medicaid while I was out of work to help support my family. Once I was hired guess what... not only did I still qualify for state medical assistance, my food stamp benefit was INCREASED! I am a full time employee, have had two raises and my family income still puts me below the poverty level. Kinda sickening.”

“Hard Working Mom” in Seatauket, New York, wrote: “I applied for permanent, full time and I was hired as a part time, temporary employee. Now I spend every week begging for any spare hours they have just to try to make a decent check.”

A worker in New Haven, Connecticut, wrote: “On Thanksgiving Day the employees were told they HAD to work 1:00pm to 10:00pm and then on Black Friday we were told we HAD to be there at 8:00 to 5:00…Thanksgiving Day is for family.”

And Chris in Amsterdam, New York, simply wrote: “Organize us!”

Walmart promotes stampede-generating discounts on Black Friday; some sales even start on “Gray Thursday.” The schedule requires workers to give up their Thanksgiving holiday to prepare the stores.

Missing family time is another insult to a workforce already overburdened and underpaid. Goytia will be expected to work 12 hours on Thanksgiving, so he plans an “early morning Thanksgiving… to get some time with the family as much as possible.” He participated in a short strike in L.A. November 6.

A Walmart worker in Canton, Ohio, came into the employee locker room in mid-November to find a wall of plastic bins labeled: “Please donate food items here so Associates in need can enjoy Thanksgiving dinner.”

She snapped a picture and sent it to OUR Walmart anonymously, calling it “demoralizing.” The photo—which seemed to show that management acknowledges workers’ paltry pay—went viral.

Meanwhile the Waltons, who in 2010 had $89.5 billion—more money than the bottom 42 percent of Americans combined—have only added to their wealth, now up to $144.7 billion. “Do the donation bins clash with the decor of the executive offices?” one wag commented in response to the photo.

With inconsistent hours, Goytia said, he will make around $12,000 this year. He said his family receives food stamps and Medicaid; he sells plasma and is participating in a medical trial “so my kids don’t go to sleep hungry.”

Charmaine Givens-Thomas, who works in a Walmart electronics department in Evergreen, Illinois, said she and her co-workers often have to go to food pantries, and several have been evicted.

“It’s just ridiculous, unheard of, that people that are supposed to be full-time associates can’t cover basic needs,” she said. “I’ve had gas service turned off because I’ve had to make hard choices. You shouldn’t have to make choices like that.”

Walmart is using TV and web advertising to try to burnish the company’s reputation.

“That should be embarrassing to my company and outrageous to the rest of America,” said overnight Walmart worker Barbara Gertz in Colorado. “If the CEO of the largest company thinks it’s OK, even notable, there has to be change.”

Even though she works full time and overnight, Goetz says she only makes between $21,000 and $23,000 a year—after five years at the store.

Walmart argued that Simon was talking only about the company’s 1 million store employees. (The other 300,000 include truckers and executives.) Even so, that still leaves more than half of store workers making under $25,000, by the company’s own admission.

Walmart won’t disclose pay figures, except to insist it pays an average of $12.83 an hour. But that average includes management such as CEO Mike Duke, who made $20.7 million in 2012. (The company just announced Duke will step down in February.) More sober estimates place hourly employees at $8.80 on average.

The new report “A Higher Wage is Possible” from think-tank Demos points out that Walmart spends more than $7 billion a year to buy its own stock—a practice designed to consolidate control among big investors, including the Waltons, who already own more than 50 percent of the company.

If Walmart stopped the buybacks and instead put the money into pay, Demos calculated, hourly employees could each get a raise of $5.83 an hour. That would be enough to put them all over the $25,000-a-year mark—without increasing store prices at all.

To find a Black Friday protest near you, click here.

Jenny Brown was a co-editor of Labor Notes.jenny@labornotes.org
Related
Peak Season for Action at Amazon »
Walmart NLRB Decision Doesn’t Change Intermittent Strike Rules »
Comics Against the 1%: Silent Night »
'Superstore' Is the Realest Retail Sitcom Yet »
No Thanks for Poverty Wages, Workers Tell Walmart and Wendy's »