Small Local Stands Up, and After 18 Months, AT&T Backs Down on Some Concessions 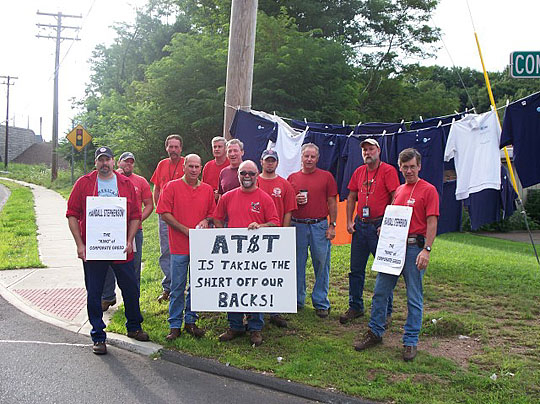 CWA Local 1298 made good use of T-shirts in its campaign against AT&T. Photo: Miriam DiNicholas

We at CWA Local 1298 got the message when an AT&T executive put out a company-wide memo two years ago: “We are not Verizon.”

Back then, the Communications Workers at Verizon had just settled a contract that maintained members’ benefits at low cost. We knew we were in for a fight, but what kind of a fight, no one could have guessed.

Eighteen months later, we’ve just settled a contract with AT&T. After months of games we’ll pay more for health care. But we backed the company down on almost all of the issues they wanted, like doing away with assignments that send two workers together to high-crime areas.

Bargaining took place simultaneously at five locations around the country, as each region has a separate contract. The plan was to bargain locally and then if problems came about, we could all stand together at the national level and be 120,000 strong.

That plan only lasted so long before one after another, other districts started to fold and accept subpar contacts. Before long the smallest district, ours, with only 4,000 members in Connecticut, was left standing alone. The national union had left us behind. We were in a serious situation, but did not want to lie down and take a contract that we felt was not up to the standards of our membership.

We came up with proposals that would not cost AT&T much, or anything at all in some cases, such as techs being allowed to wear shorts.

What we found was a company set on undoing 50 years of past practice and previous contract language. They wanted us to go from paying almost nothing for our benefits to paying more than 65 percent of health coverage.

They also tried to undo safety language, some dating back to the 1940s. One provision insists that two techs work underground. They didn’t want to improve any work rules, or give raises to the premise technicians—less-senior workers who install bundled TV-and-internet service.“Prem techs” have the worst working conditions in the company: hours changed at the drop of a hat, less than 40 hour work week, lower pay, and involuntary overtime.

We saw that the only way to deal with AT&T was to play hardball. Whenever we passed them a proposal, their negotiators would take a few hours and pass it back to us, saying, “not interested.”

When they passed us a proposal, we would take a week to come up with questions and information requests. They’d reply, we’d ask more questions. This stalling extended our health care at the existing level for one more year, while we tried to wear down the company.

During these 18 months, we found out AT&T cares about only two things: making as much money as possible and keeping up its public image. So we attacked it. With support from CWA’s District 1, we hit the company’s public image whenever and wherever we could.

A thousand people rallied in downtown New Haven in May 2009 and marched four blocks to AT&T headquarters in Connecticut with very loud Harleys leading the way.

Whatever event they sponsored, we struck, from American Idol auditions in Hartford to the Pilot Pen women’s tennis tournament. We were there, loud and in numbers.

At Pilot Pen, we stormed the AT&T booth that showcased the company’s new products, filling up the trailer and staying until they called the police, who determined we were on public property and doing nothing wrong. AT&T closed the booth for the rest of the day.

We also hired an airplane to pull a 50-foot banner that read “AT&T = Greed,” which flew over every company-sponsored event. When we found out CEO Randall Stevenson was going to talk on Wall Street, we took our plane and buses down for a rally at the heart of corporate greed in America.

We hired four electronic billboards on all four major highways in Connecticut, two of them visible from AT&T buildings, which kept the company’s greediness in front of the public.

All the while AT&T had not budged. So we made T-shirts that read “Prisoner of AT&T” and coordinated a day to wear them at work. Almost 300 members were suspended. We filed Labor Board charges, and won, allowing our members to win their day’s pay back and express their free speech.

We also filed seven other board charges, everything from withholding information to implementing a policy without bargaining. We have to date won every charge.

This month’s settlement has its downsides. We will pay for our benefits, but less than 30 percent of the cost, not the 65 percent the company wanted. We did not get some work-rule changes that we wanted. Contractors are still a problem.

But we made some gains for the prem techs, like a $3-an-hour raise, a 32-hour guaranteed work week, and overtime limits, so they can’t be forced to stay until the cows come home.

I don’t think we could have won a better contract. But we can be proud that we fought a hard fight, and maybe showed the other districts what can be done. Maybe next time—just 13 months from now—we can stand strong, one and all.

Charles Borchert, Jr. is a business agent in CWA Local 1298.

A version of this article appeared in Labor Notes #379, October 2010. Don't miss an issue, subscribe today.
Related
Shocking Death on Set Shows What’s at Stake in IATSE Film and TV Crew Contract Fight »
How We Turned Bargaining Around at Law360 »
Swarming Solidarity: How Contract Negotiations in 2021 Could Be Flashpoints in the U.S. Class Struggle »
Cleveland Heights Teachers Strike in the Snow, Beating Austerity with Solidarity »
When You're Winning in the Streets, Don't Lose at the Bargaining Table »