Bargain to Organize, Organize to Bargain 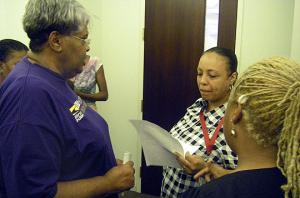 The labor movement has long debated its priority: organize new members or represent the ones we have? Our local has found that we grow because of the strength of current members. We have had to do both—be strong in our organized shops and grow through new organizing—or we could do neither.

Six thousand workers at Help At Home, a for-profit home health care company based in Chicago, were organized in SEIU Healthcare Illinois. They travelled to the homes of low-income seniors to provide cooking, housekeeping, and other non-medical care, largely paid for by the state.

Although workers had won improvements through the union, they had a rocky relationship with the company. Near-minimum wages for a time became bounced paychecks. Help At Home went through bankruptcy, questions often went unanswered, and grievances or actions were needed for the most routine of items, such as receiving annual raises.

In 2008, Help At Home was about to receive the largest funding increase ever to its state contracts. Union leaders knew this was a chance to get a substantial raise—$1 an hour—and to access new state funding for employees’ health insurance. But we began to consider how much more power we would have if we organized the company nationally.

Help At Home activists across Illinois, union leaders, and staff began discussing what could happen if we added national organizing rights to our Illinois bargaining demands. When workers had made an attempt to organize in several states the previous year, the company quickly brought in anti-union consultants and held captive audience meetings. The campaigns fizzled, for the moment.

The options were a quick contract settlement with the new state funding, a fairly sure thing that would benefit Illinois workers but leave us with the same disappointing relationship with Help At Home. Or a riskier strategy: demand expanded organizing rights in other states alongside our economic demands in Illinois, in the hope of dramatically increasing our power with the boss.

The bargaining committee wanted to see Help At Home workers organized nationally. Many of them had led organizing drives at their own shops. They knew the promise of quick raises for Illinois employees would be tempting to many workers and that they would have to build connections with those just starting to organize in Indiana.

Members wanted to demonstrate to the company that organizing rights in Indiana would be central to an Illinois settlement. From the first day, every piece of literature we distributed included a demand to end union-busting in Indiana alongside our demands for Illinois raises and health insurance. Bargaining updates to union members included reports on the company’s anti-union activities in other states.

Help At Home workers had regularly used direct actions in previous contract campaigns. This time, workers coordinated short takeovers of eight Illinois Help At Home branches on the same day, with the demand to end union-busting. They delivered thousands of postcards from members pledging support to their co-workers in Indiana.

On paycheck pick-up days, union activists and staff would provide cell phones for workers to fill the voicemail boxes of company executives with hundreds of messages of solidarity with Indiana. Indiana managers received messages from Illinois workers demanding they end their anti-union activities.

For the Indiana workers, reports of this activity across the border encouraged them during difficult organizing drives.

Direct connections were also built. Many Illinois members volunteered time house-visiting across the border. A few went on leave to work full-time on the campaign. Others made calls from their union halls or homes to talk to Indiana workers who had not made up their minds.

The company pushed back, claiming that Illinois and Indiana were “separate issues.” Leaflets to Illinois members claimed management was ready to hand out $1 raises immediately, and that the union was keeping them from doing it.

A company flyer with the name and photo of a leading bargaining committee member was released, implying she thought workers should take the raise. But workers remained remarkably invested in the Indiana organizing.

Members of the Indiana organizing committees were invited to sit on the Illinois bargaining committee. While they were officially non-voting, advisory participants, their presence sent a message to Help At Home.

They also gave Illinois workers firsthand accounts of their organizing (and management’s activity). They inspired the Illinois members to keep building support for “no settlement without Indiana.”

Most important, sitting on the bargaining committee allowed the Indiana workers to see the union in action. They saw rank-and-file leaders fighting and winning. They saw management being confronted by militant, organized workers and having to take it.

Management’s strategy had been based on the belief that Illinois workers would care only about how much of a raise they received and how quick. Executives believed organizing rights were just a union officers’ issue. The company never believed that significant numbers of workers would care what happened to non-union employees they would never meet.

They were taken by surprise. One executive told union leaders, “I can’t walk into our offices anywhere in Illinois without getting yelled at about Indiana!”

The Illinois workers emerged with a contract that provided their largest raises ever, health insurance for the first time, and other improvements. And Help At Home signed an agreement that expanded the organizing rights of thousands of workers in the other states where the company operates. Since then more than 600 Help At Home workers have won organizing drives, and more campaigns are underway.

This month thousands of Illinois workers, about to head into their own contract bargaining, signed petitions demanding a fair settlement in both states. As the Indiana workers campaigned for their first contract, their bargaining sessions included Illinois workers who were able to advise, support, and coordinate activity across the company. On August 18 the Indiana Help At Home workers won a tentative agreement--which should dramatically increase the rate of organizing in the rest of the state.

And in a major victory for future solidarity, the company gave in on a major issue both sides had drawn a line over: Help at Home agreed to a one-year contract, which will line up the Indiana agreement with the Illinois expiration date.

A version of this article appeared in Labor Notes #378, September 2010. Don't miss an issue, subscribe today.
Related
Non-Compete Agreement Leaves Workers Homeless and Jobless »
Management Rights: A Pitfall When Negotiating Your First Contract »
Southern Service Workers Launch a New Union »
Nine For-Profit Nursing Homes Pull A Simultaneous Strike—And Another Is on the Way »
Viewpoint: The NLRB is Underfunded and Understaffed—And That’s a Big Threat to the Current Organizing Wave »