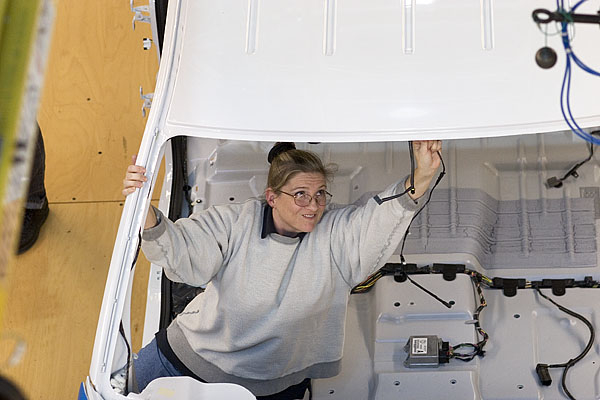 Delegates to the United Auto Workers’ national Ford Council opposed reopening their contract in early August to make more concessions. Ford made a $2.3 billion profit in the second quarter of 2009, though the company attributes that to debt swaps and one-off cuts.

In March, Ford workers approved hefty wage, benefit, and work rule concessions by 59 percent, even before GM and Chrysler workers were forced to swallow givebacks in the government bailout. But now, Council delegates—most of them presidents of their local unions—said the rank and file will vote concessions down if more are proposed. Then they, the local officers, will be bounced from office.

“Almost every speaker at the meeting, from several locals, said their plants would vote it down if they come with more concessions,” said Gary Walkowicz, a bargaining committeeperson at Ford’s flagship assembly plant, Dearborn Truck. “I agree with them. People are angry about the last concessions, let alone any more.”

Since the negotiations began over new concessions, Ford management has held meetings in some plants to make their case that the company is not doing as well as the headlines claim.

A union rep who was in one meeting called by management said the company had seven arguments for more concessions, including its legal costs, weak reputation among consumers, and fragile supply base.

"I agree with saying 'no' next time," said Eric Truss, a worker at Local 600's Dearborn Diversified Manufacturing Plant. At a union meeting, he said if the company and union keep going back for more concessions, holding special votes, "the vote on the last contract would not mean anything—because the contract can just be changed anyway."

UAW Vice President Bob King said Ford wants the same concessions as GM and Chrysler. Top demands include a six-year freeze on new hires’ $14-an-hour pay and elimination and consolidation of skilled trades. Since the meeting, there has been talk of eliminating the right to strike.

Eleven Council members spoke against concessions. A delegate from Ohio said the assembly plants subcouncil had gone on record against givebacks earlier in the day.

Nonetheless, late in the meeting King said he’d come back to delegates if he could negotiate a good trade-off for concessions. He was to officially begin bargaining with Ford on August 25.

If workers say yes, Ford’s gains from its top concession demands will be minimal at present. The company will be hiring few new workers in the next six years, and it hardly needs more concessions by skilled trades because it is already combining jobs ruthlessly.

But management wants to make sure GM and Chrysler gain no labor-cost advantage. “Pattern bargaining,” long a union principle, is now Ford’s to defend—on the way down.

The membership and the UAW Council may be on a collision course with the company for the first time since 1976, the year of the last national strike at Ford.

Ron Lare is a retired UAW Local 600 member.
A version of this article appeared in Labor Notes #366, September 2009. Don't miss an issue, subscribe today.
Related
Ballots Are Out in UAW Election, with Contrasting Visions of Unionism Up for Leadership »
In a Surprise, John Deere Workers Get to See Contract Before Voting On It »
Auto Workers to Vote on Direct Elections for Officers »
Employers Are Using the Crisis to Push Concessions They Don't Need »
New York City Retirees Fight to Defend Their Medicare Benefits »

As a GM/UAW worker let me tell you that all the concessions mgt gave up in a sharing of sacrifice has been returned to them. As the UAW workers have given and given we are alone in trying to save the company and our jobs. Executives continue to rake in the bucks, so UAW members be ware of giving away, the giving should start at the top.

What Ron's article didn't state is after we all got up and gave specific reason's why we were against concessions and believe me losing our jobs was stated as by one of our council leader's "We can't ask the council member's to go ask our membership to take more, we can't afford to lose the talent in this room." There was no fear of losing our jobs we stood strong. The problem was we never called for a vote on King's request to allow negotiations for more concessions. Gettelfinger got the message and stated it from the podium saying "I hear you loud and clear I don't have a vote, I work for you." Then Bob went to mic and totally talked his way around it and no one caught it. Though some did question on the way out that we had not taken a vote but it was to late. It was apparent King had already been engaging in talks with the company and there's the danger. It's not what our negotiator's may dabble in. It's those unpublished letters signed by the top of the house that they slip in there. Hell rumors had been flying since talks started with GM & Chrysler that Ford was told to sit out, we all heard them. The union strategy one may of thought was for Ford to stay back and hold the line but these action's show it's not the case. Ford was told to sit back and Gettelfinger & King would hand Ford what the other two negotiated with the government. This guarantees the salary side of the house taking no concessions and not having the government in Ford's books while ford continues it's ventures in other countrys. King's not protecting us as Ford membership he's protecting his IPS plants through Ford. This is union? As far as the company going out and selling their sob-story after we the council say no, the same two have also blessed this. The danger is if we as the council say no concessions, to the president and the vice president of our union and they allow the company to then go in a negotiate around them plant by plant and it works don't they realize that is shows the company and the membership that the two of them are ineffective as our leaders. All this while our convention lurks right around the corner but their not worried because one is on his way out and the other thinks we don't have the back bone to vote him out.

I WAS QUITE PLEASED- THE FIRST TIME IN MY TEN-YEAR HISTORY AT FORD, OUR LOCAL 249 HAS TAKEN AN OFFICIAL POSTITION AGAINST REOPENING THE CONTRACT. THE CONCESSION TRAIN NORMALLY IS CO-PILOTED BY THE UAW, BUT I CAN PROUDLY SAY THAT IS NOT THE CASE IN THIS INSTANCE. WE SHOULD GET OUR BREAKS BACK AS WELL. A DEAR FRIEND OF MINE IS ON BARGAINING COMMITTEE AND HE FORTUNATELY HAS THE FORCE OF HIS UNION BEHIND HIM NOW. BOB KING SAYS THE ADVERSARIAL RELATIONSHIP BETWEEN FORD/UAW IS OVER AND BY ALL INDICATIONS HE WAS CERTAINLY CORRECT- UNTIL NOW. THE LOWER ESCHELON OFFICERS HAVE TAKEN A STAND. WE CAN ALWAYS FIND NEW WORK- WE MAY NOT EVER BE ABLE TO RECOVER OUR DIGNITY ONCE IT IS LOST. SORRY BOB.

How many times have these corporations whined and screamed for concessions from the people who produced their wealth. Everytime they go to the UAW, our leaders plead the corporate case for concessions and tell us the only alternatives are layoffs, plant closings, ad nauseum!
How many times need we be reminded that concessions NEVER saved jobs.
During the voting for the 2007 contract, several Chrysler plants in Detroit were visited by solidarity house prostitutes who warned them that if UAW members voted against the proposed concessionary contract, their plant would close. The contract passed and the plants closed.
It is better to stand up against greed and go down fighting, rather than fearfully accept concessions and go down without a fight.

Let's just all roll over and that is how we will finish out our life.......don't ever disagree with the extortion and blackmail that has become the norm from big business!

I for one am sick of it! I'm sick of this push it down my throat crap for the betterment of WHO? BIG BUSINESS, BIG UNIONS, BIG BANKS, BIG GOVENMENT? and after it's all said and done, they still ain't gonna have enough. ENOUGH NOW! Take your engine plant to Mexico, I'm sure they will increase the sell of cars by thousands! I'm sick of it all! Give it all away and then stop your whining! or get off your collective arses and FIGHT!

It makes no sense for the Union not make the same concessions to Ford which it made to the other Auto makers. I understand the UAW has a big share of the other auto companies but to deny the concessions simply puts more of their Union brothers and sisters out of work through a potential bankruptcy, or even worse a dissolution of Ford. Smarten up UAW, keep the folks working and agree to the concessions. Full employment is better than unemployment or no employment. It doesn't always need to be about money..how about people trying to survive.