Too Big to Fail? Take it Over. 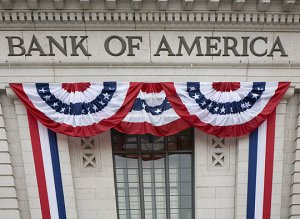 Billionaire fraudster Bernie Madoff may be behind bars, but his business model is alive and well. How can we keep high-flying bankers from pulling the same kind of bait-and-switch with taxpayers?

Experts — from Nobel Prize-winning economists to Alan Greenspan, the libertarian former Federal Reserve chairman — admit that some kind of nationalization for failing banks is the best way out of this mess.

But nationalization can mean many things. If the government takes over, whose interests are protected? Who pays for the losses? As the AFL-CIO executive council concluded, “Government intervention must be structured to protect the public interest, and not merely rescue executives or wealthy investors.”

The best way to protect the vast majority of Americans who don’t live the Wall Street high life is to create a federally run bank out of today’s insolvent institutions.

It would be cheaper, safer, more democratic, and more transparent.

And it should be permanent. We can’t leave what Warren Buffett called “financial weapons of mass destruction” in private hands any more.

Bankers are working hard to protect their gravy train. “Nationalization would be a disaster,” said Bank of America CEO Kenneth Lewis, who’s pulled down $223 million since 2001, and whose company got $45 billion of bailout money with no strings attached.

Lewis hopes scare tactics will keep us from asking the simple question: How can we force the people who got us into this mess to eat the losses—and to ensure that it doesn’t happen again?

WHAT’S A BANK FOR?

If banks didn’t exist to make big money for the already-rich, what would they do? They would be a place for people to keep their money safe, even see it grow. They would lend money to other enterprises, both public and private, to keep people working and start useful businesses.

Inventing lighter-than-air financial instruments—that today look more and more like get-rich-quick schemes—doesn’t have to be part of the picture.

In other words, we need a bank whose purpose is to serve the public rather than to create megamillionaires. And that bank has to become a permanent institution, like Social Security or Medicare.

Many bank nationalization schemes being floated assume the government will take over the lemons, fix them up with taxpayer money, and then sell them back ASAP to rich investors. As the New York Times approvingly quoted one D.C. economist: “Nobody in their right mind wants the government to be in the banking business any longer than it needs to be.”

That scenario puts the same people, with the same motivation to fly high and wide, back in charge. We’d end up in the same position again later on, because the lure of billions to be made wheeling and dealing is just too great.

Other models don’t put the whole economy at risk. For example, the nation’s credit unions, which operate as not-for-profit banks, emerged from the financial meltdown largely unscathed.

They pay higher interest rates for deposits and charge lower interest rates on credit cards and mortgages. Some even set aside funds for socially valuable investments which may never be money-makers. Why not scale up these principles?

Why would a government bank be any better than one run by millionaires? It’s understandable to fear that such a bank would become a personal checking account for politicians and their friends, and that its investment decisions would be subject to political pressures. While it’s hard to imagine more shady self-dealing than we’ve seen with banks in private hands, public ownership means setting a higher standard.

Ultimately, the only way to keep a public bank honest is public pressure, coupled with strong mechanisms of accountability and transparency. Just like with everything else the government does, politicians are only as honest, and responsive, as we make them.

WHY IT WOULD WORK

This is a cheaper way to go. We’ve already spent $700 billion shoring up banks, and the Obama administration has set aside another $250 billion just in case. Creating a “bad bank” to buy up toxic assets could ultimately cost $2 trillion, the Wall Street Journal reports.

The Congressional Oversight Panel found that 22 percent of the first bailout installment went towards buying stock in the bailed-out banks at inflated prices. That inflation cost $78 billion.

Unless the government changes the incentives and takes over broke banks, they’ll keep selling worthless assets to the government for as much as they can get away with. A real nationalization would force them to swallow their losses.

As the AFL-CIO executive council noted March 5, “The debate over nationalization is delaying the inevitable bank restructuring, which is something our economy cannot afford.”

This is a more transparent way to go. It’s hard to imagine misplacing $350 billion, but that’s what bankers told Congress in January. Bankers said they couldn’t account for their gift from taxpayers, and Washington sent the second half of the bailout package into the financial Bermuda Triangle anyway.

A public system is much more transparent. The Federal Deposit Insurance Corporation (FDIC), the government agency that insures bank deposits nationwide, can account for every cent of the money it’s used salvaging failing banks in the past year.

This is a safer way to go. Regular commercial banks and investment banks were separated until Congress, under relentless lobbying, removed the firewall in 1999. Regular banks were more conservative in their investments, and investment banks took bigger risks, sometimes scoring larger returns. Blending the two types of banks opened everyone up to pervasive risks, with the desperate consequences we see now.

Credit unions haven’t suffered in the current meltdown, because they are run under different principles with a different objective: to serve the members. A permanent public bank would have the same objective for taxpayers.

This is a more democratic way to go. Almost everyone acknowledges that we’ve given the banks our money thus far without any say in how they’re run. Should Wall Street executives have showered themselves with $18 billion in bonuses at the end of 2008?

They got them because the banks remain in private hands, and because the stock we’ve bought is mostly non-voting. Public ownership would halt the excess, and open access to credit on affordable terms, something our lackluster economy needs.

TOO BIG TO BE PRIVATE

If the banks are big enough to put our whole economy at risk, then they’re not only “too big to fail”; they’re too big to be private.

Over the last 30 years we gave bankers the steering wheel to our economy, through deregulation and a supreme faith that the market knows best. They’ve driven our economy off a cliff. Why hand them the keys again?

I'm very glad to see that Labor Notes is taking a clear position on this issue, and I'd suggest that elaborating it should be a focus of your website for the forseeable future. The idea could be framed as something like "Let's make banking a public utility that serves us instead of ruining us." The idea of a parasitic superstructure that arises on top of a reasonable economic function can also be extended to other components of FIRE institutions, especially health insurance.