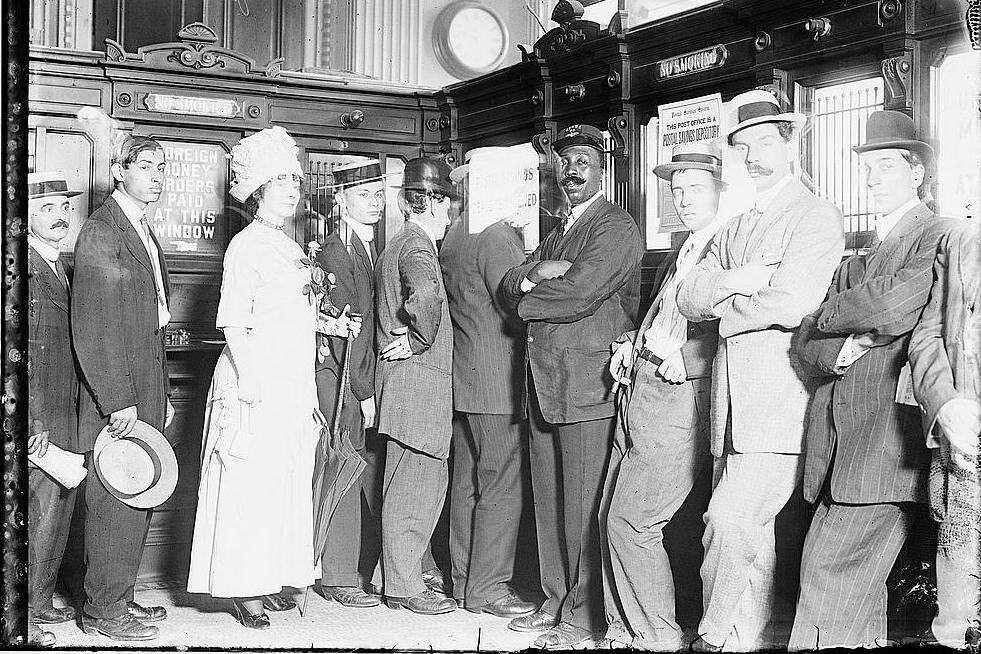 Postal banking, an idea whose time has come, again. The first depositors stood in line at the New York Postal Bank when it opened in 1911. Postal banking is common in other countries. Photo: Library of Congress.

Postal unions are arming for battle as Postmaster General Patrick Donahoe resumes his attack on mail processing plants. He’s put another 82 plants on the chopping block for 2015, claiming this will save $750 million a year.

But you know what could bring in 12 times that much money? Postal banking.

Offering basic financial services in post offices, the Postal Service’s Inspector General (OIG) has found, could generate $9 billion a year. Postal unions in the U.S. and Canada have called for a resurrection of such a system, which formerly existed in both countries and currently runs in others including Switzerland, New Zealand, and Italy.

The U.S. Conference of Mayors points out it could also offer cities a source of affordable financing to repair roads and bridges.

The OIG’s January report, “Providing Non-Bank Financial Services for the Underserved,” spells out how postal banking (technically “non-bank financial services”) could work, and how it would especially help people who are young or low-income.

“More than a quarter of American households are left outside or on the fringes of the traditional financial system,” the OIG’s report says.

Many of these are people who have been refused bank accounts—because of debt or bad credit, for instance—or simply don’t have enough money to pay the fees to open or maintain an account. Some just don’t have access to banking services in their own language.

No bank account means no way of saving, beyond a penny jar—leaving those who live paycheck-to-paycheck without a buffer against catastrophe. The chance to save, even a small amount, “could help bring significant financial stability to millions of Americans,” says the OIG.

And some people just don’t have a financial institution nearby. Banks keep closing branches, often in exactly the poor neighborhoods and small towns most in need of service. But post offices are ubiquitous.

Over half the country’s post offices are in zip codes with just one or no bank branches. Some of these already offer a few financial services, like local and international money orders, and sell single-denomination gift cards, which can be used like a credit card, but without refilling.

Central to the OIG’s proposal is a refillable “Postal Card,” similar to a debit card. A customer could put cash or paychecks into the account, then use the card to withdraw cash or pay bills. ATMs at post offices would make these money transfers convenient. The post office could also offer savings and credit services similar to mainstream banks.

Credit services would give customers who can’t get mainstream bank loans an alternative to much more costly payday lenders or loan sharks. If customers overdrew, the postal banking system could, as a federal agency, collect from their tax refunds.

Americans currently spend upwards of $89 billion each year on fees and interest on “alternative financial services” like payday loans. The OIG estimates that 10 percent of this revenue could move into a less predatory postal banking system. That’s where the estimate comes from that the U.S. could bring in $9 billion a year.

A partnership between postal and mainstream banks is key to the OIG’s proposal. The report suggests customers without bank accounts could start with the postal bank, and eventually move into the traditional banking system, where they could gain access to home mortgages and auto loans.

Some degree of collaboration with private banks would be necessary to make a postal bank practical. But unionists should keep both eyes open in choosing which version of postal banking to back. The phrase “public-private partnership” is generally a red flag—and should be especially so coming from this OIG, which has also promoted such “partnerships” to outsource postal jobs to private retailers, as in the Postal Service’s deal with Staples.

Big banks, for their part, aren’t excited about the idea of postal banks, a lower-cost banking option that they worry could threaten their monopoly.

“A postal bank is a great idea, in my opinion,” said Tom Sgouros, author of Checking the Banks: The Nuts and Bolts of Banking for People Who Want to Fix It. But “it will require wariness—careful construction of bylaws and expectations as well as active oversight—to make sure the collaboration involves pulling the behavior of existing banks up, rather than forcing the promise of the postal bank down.”

A version of this article appeared in Labor Notes #425, August 2014. Don't miss an issue, subscribe today.
Julia Kann is a staff writer for Labor Notes.julia@labornotes.org
Related
How Postal Workers Saved the Election »
A Common Defense: Mobilizing Veterans in Labor to Beat Trump and the GOP »
Your Letters and Parcels Are Piling Up Thanks to the New Privatizer General »
Milwaukee-Area Letter Carriers Are Refusing to Go Along with Mail Delays »
‘Postmaster DeLay’ Takes One Step Back amid Media Scrutiny, Public Protest, and Worker Resistance »