Occupy Oakland Shuts Port as Unions Hustle to Keep Up 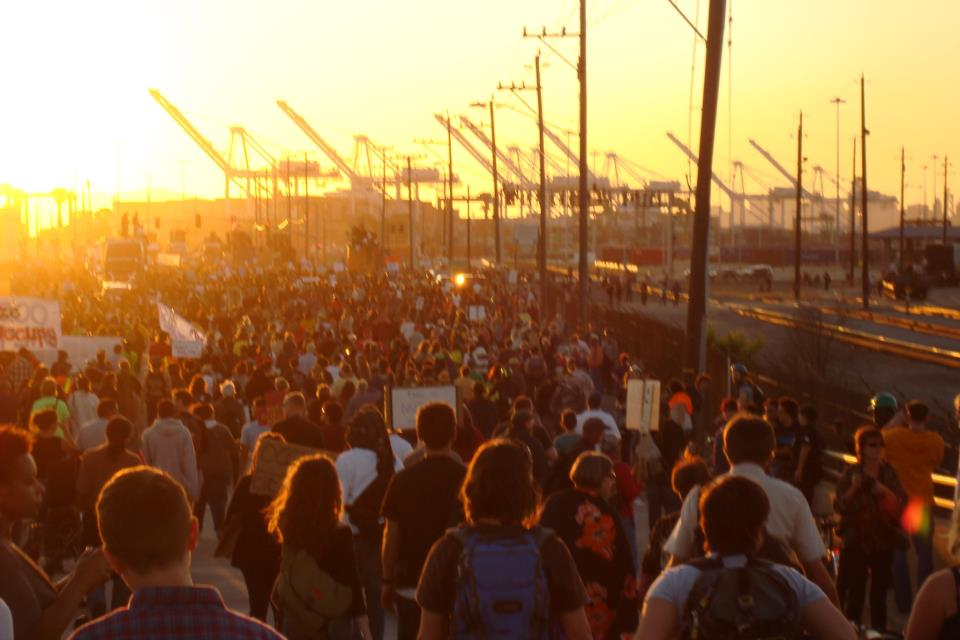 A massive “day of action” in Oakland closed businesses in the city’s downtown core and halted traffic at the nation’s fifth-largest port. Unions hustled to rally members, building a healthy response for the first occupy action where success required other organizations to mobilize. Photo: Adam Hefty.

A massive “day of action” in Oakland closed businesses in the city’s downtown core and halted traffic at the nation’s fifth-largest port.

About 7,000 marchers took part, mainly occupiers and other folks marginalized by an out-of-whack economic system and drawn to participate with the rest of the 99 percent.

The unions had just a week to activate members in response to the call from Occupy Oakland to walk out, in protest of a police raid on the encampment last week that left protester and Iraq war vet Scott Olsen hospitalized with a fractured skull.

Although the demonstration was far short of the general strike called for by the occupiers, the response was healthy for the first action where success required other organizations to mobilize.

“My union called for member participation,” said David Norris, a fourth-grade teacher at Acorn Woodland in Oakland, one of about 300 teachers to skip work yesterday. “Teachers are under attack and that means our students are under attack.” The Oakland Education Association urged members to join the protest after school.

SEIU Local 1021, the mammoth public sector union, dispatched member organizers to its worksites to motivate members. It sent out robocalls encouraging members to participate. At the Laborers’ hiring halls, the union directed members toward the mobilization if there was no work for them that day.

“I realize that the reason I don’t always have work, like today, is because the banks ran us into the ground,” said Laborer Kevin Smith. “I’m unemployed, frustrated, and mad like everyone should be if you’re in the bottom of the 99 percent.”

Unions have been helping pay for toilets, food, hay for the muddy encampment, and bottled water. The Communications Workers paid for Occupy Oakland placards and the Alameda Central Labor Council fed occupiers on the day of action.

Cultural, political, and community groups like Causa Justa/Just Cause and Alliance of Californians for Community Empowerment led 1,000 on a march snaking between Bank of America, Chase, and Wells Fargo. “We were planning to occupy these banks but when they saw the size of the wave heading their way they locked themselves in,” said Nell Myhand, a member of Just Cause.

The bank protesters proceeded to furnish the street with a couch and other furniture where they sat and shared stories about home loss and being taken advantage of by predatory lending and toxic home loans.

“To me this looks like a mass movement and as unionists—and part of the 99 percent—we must support it,” said Herb Klar, a social worker in the Kaiser Permanente hospital chain and an NUHW member.

The sunny day started with large crowds of activists that were as diverse as they were energetic. From kids to old folks, the camp was bustling with activity as people made signs, prepared meals, engaged in political discussions, and danced to a DJ.

The occupiers were joined by 300 parents with a children’s brigade, 200 students from UC Berkeley, and an anti-capitalist contingent that vandalized a Whole Foods store and broke bank windows.

As the hours passed the encampment swelled. By 3 p.m. the “Share Your Story” tent was covered with hundreds of stories ranging from the student deep in debt to teachers facing the hardships of teaching in overcrowded classrooms with gutted budgets to folks facing foreclosure.

Blockades at the Port

Longshore workers with ILWU Local 10 had announced earlier in the week that if Occupy Oakland put down pickets they would honor them.

Because of contract terms, the union asked members to go to work and join the occupiers in the evening. But about 40 longshoremen showed up to the hall in the morning and refused to take work, effectively slowing work at the port. Non-union port truck drivers were backed up for miles.

The occupiers shut the port completely when they converged there at 7 p.m. The march leading to the port seemed to stretch as far as the eye could see, with dancing, chanting, and bikers intermingling. Marching bands and portable sound systems helped activists keep a steady pace.

Groups of about 200-300 stopped at each port gate and set up blockades. Protestors climbed train light towers, hung banners, and physically blocked port trucks from entering.

The scene was electric as protestors realized that they indeed had the numbers needed to shut it down.

The port asked protesters to let workers leave to go home, and ILWU officials said night-shift workers wouldn’t try to make it through the barricades.

As the night wore on, a sort of block party broke out, with younger protesters blockading both sides of the street with burning trash bins. When they broke into a building for an impromptu party, police arrested about 40.

“As long as we can steer away from the street fighting and not get too narrow with our demands, this movement will keep going,” said Peter Olney of ILWU. “The occupy movement represents a reawakening. We’re just trying to keep up here.”

Related
Minneapolis Strikers Demand a Living Wage for the Lowest-Paid Educators »
Richmond Educators Are First In Virginia to Win Bargaining Rights »
Twin Cities Teachers and School Employees Gear Up for Strike »
Mike Parker: A Labor Educator with Impact »
As Omicron Rages, Teachers and Students Fight for Safety Measures in Chicago and Elsewhere »