Card Check: Can It Organize the Unorganized? 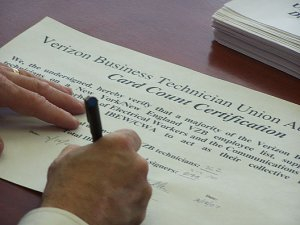 Employers do everything in their power to make sure workers don’t get a chance to vote for a union. They flout labor law, making a joke of the familiar National Labor Relations Board procedures where the government’s job is to oversee a “fair fight” election between the union and the boss.

As a result, unions have embraced neutrality agreements and card check procedures as an alternative road to growth. Since the mid-1990s their use has accelerated.

Several studies say the win rate for card check is about 70 percent, compared with 55 to 60 percent for recent NLRB elections. The numbers recruited are also larger, mainly because the organizing targets are larger, too. The AFL-CIO says that three years ago its affiliates—before the split—organized 150,000 new private sector members by such procedures. That’s more than twice the 70,000 brought in through NLRB elections that year.

The Costs of Card Check

Neutrality and card check agreements carry a cost. In three-quarters of such agreements studied so far, not only does the employer agree not to attack the union, but the union agrees not to attack—or sometimes even to criticize—the company. The "Us vs. Them" basic to unionism is muted. There is a temptation to "sell" the union to the boss as a cost-effective partner, one that won't hurt profits and might even boost them. SEIU's Andy Stern calls this "value-added unionism." Just like the NLRB route, card check is slow and expensive. Researcher Janice Fine notes that for SEIU, at its current pace, "in health care, it would take upwards of thirty years, at a cost of three billion" dollars to reach 35 percent density.

But the fact is that card check is still not widely used.

The NLRB is still the primary avenue to union recognition, although the data don’t take into account the number of workers involved in each drive.

The exception is UNITE HERE, which seldom uses the NLRB.

Why don’t unions use card check more often? Employer resistance has made it more and more time-consuming and expensive.

One distinct approach to card check and neutrality agreements is called “bargaining to organize.” It involves employers where the union already represents some portion of the company’s workforce. The union uses its muscle in bargaining to convince the employer to accept an expedited procedure at the non-union facilities.

Examples include CWA’s agreement with AT&T Wireless, UNITE HERE’s with Hilton and Starwood hotels, UAW’s with 11 auto parts suppliers, and the Teamsters’ 2007 agreement with UPS Freight.

Although these are national agreements, the unions still must organize one workplace at a time in most cases.

Winning a card check procedure is not easy. Such agreements often take years to win. Sometimes the employer agrees and then ignores the deal, as when Verizon’s mobile phone division double-crossed CWA.

The crisis of U.S. labor lies in the private sector. More than a million members disappeared there between 2000 and 2007—95 percent of them in manufacturing. Unions added 133,000 in the private sector last year, but this wasn’t enough to make up for the 274,000 lost the previous year. Most of the private sector gains were in construction and are almost certain to be wiped out by the current housing and financial crisis. From 2000 through 2007, only 19 unions, eight from the public sector, saw net membership gains, according to the Department of Labor. Three were in construction. The net gains of the Teamsters, Steelworkers, and Airline Pilots were accounted for by mergers. The only Change to Win affiliate to make a net gain through organizing was the Service Employees (SEIU). The few private sector unions that saw net gains were smaller, mostly occupationally based AFLCIO unions, like the 60,000-member International Federation of Professional and Technical Engineers, which grew by 42 percent—and can claim the mantle of “fastest-growing union.” Absolute numbers of newly organized workers matter more than percentages, but the record of some smaller unions still questions the conventional wisdom that size and resources count for everything.

The problem becomes more severe at non-union companies, which have even less incentive to agree to card check. Forcing them can take time and money.

The 2005 SEIU victory in Houston that brought in 5,000 janitors took a massive community mobilization, pressure from religious leaders and the mayor, and a 10-day strike to get the contractors to accept card check. It took another year and a strike to win a first contract.

A 2007 ruling from the NLRB has made matters worse. The Dana/

Metaldyne decision says that within 45 days after card check recognition, anti-union workers may file for a decertification election. After an NLRB-supervised vote, in contrast, no decert can take place until a year has passed.

Even before Dana, the NLRB sided with challenges to card check and ordered workers to vote. The unions involved won those elections, but the new ruling will mean more delays, more costs, and, inevitably, some reversals.

The labor movement has therefore gone to Congress with the Employee Free Choice Act. EFCA includes a mandatory card check procedure, arbitration of first contracts, and substantial fines for breaking the law.

Last year, the Republicans talked the bill to death despite a massive AFL-CIO pressure campaign, which failed to move more than one Republican. The hope now, of course, is that the Democrats will win 60 seats, a filibuster-proof majority in the Senate, and pass EFCA.

But the last time the Democrats had 60 senators was 1977-79 under Jimmy Carter—when labor law reform failed to pass.

CARD CHECK TO THE RESCUE?

If it were to pass, EFCA no doubt would improve organizing prospects.

But by how much? The signs from Canada are not encouraging. Canadian labor expert Roy Adams writes, “Union density and bargaining coverage are falling even in provinces such as Saskatchewan and Quebec that have card check and first contract arbitration clauses in effect.”

Canadian employers have learned from their American counterparts how to intimidate workers, and even under better laws, unions aren’t organizing fast enough to halt declining density.

While employers are the main problem, unions themselves share responsibility for slow growth. A few years ago, AFSCME’s Paul Booth told an AFL-CIO organizing summit, “What we need is an army, and that can only come from our underutilized membership ranks.”

CWA organizer Louie Rocha agrees. “The national union is of the opinion that we should wait until EFCA passes,” said Rocha, who stepped down from the presidency of Local 9423 to head his local’s organizing of Comcast cable workers. “The hell with that.

“In our campaign, stewards are doing all the follow-up calls. They’re gaining experience that would take decades to learn if they were just taking orders.”

Related
How Starbucks Workers Won in Mesa »
If the PRO Act Were Law, The Amazon Union Election Would Have Looked Very Different »
Viewpoint: Who Invited Them? Employers Like Amazon Should Have No Say in How Workers Organize »
Goodbye and Good Riddance: Biden Fires Labor Board’s Peter Robb »
Trump’s Anti-Worker Labor Board »

Tear down that oppressive corporate structure, dismantle the bureaucracies, give up the power lust and hand over to the people the right to honestly use the name "union"!

So I guess intimidation plays no part in the increased success of "Card check"? Isn't it tantamount to having someone follow you into the voting booth?

The article is very good and discusses some very important issues.
I would take issue with some of the rhetoric that I include below"
"The Costs of Card Check. Neutrality and card check agreements carry a cost. In three-quarters of such agreements studied so far, not only does the employer agree not to attack the union, but the union agrees not to attack- or sometimes even to criticize -the company. The "Us vs. Them" basic to unionism is muted." This is all just general speculation and it's rhetorical. It might be the opinion of some people toward a particular campaign, but it shouldn't be leveled against all the agreements we are winning. Anyone who's organized workers knows that every shop is different and every campaign is different. These agreements do not stop workers from engaging in a meaningful campaign based on real issues that builds their union. It's more a question of how well the campaign is run and the level of activism in the unit, not the wording of the agreement. I for one, would rather our members take the high ground in a fight for retirement security or other important issue, rather then be left with the last resort of name-calling and insults. We don't need any of that to win. We are on the side of justice here.
Also, if SEIU got to 35% in health care in thirty years that would be wonderful and historic. Let's move faster, but let's also be real, in most industries we have to reverse the direction we're going. Thankfully, we have SEIU, who are going in the right direction already.

Kim's article is balanced and accurate. Widening the channel for organizing workers through card checks and first contract arbitration helps level the playing field for unions vis-a-vis employers, but means little unless unions make sustained organizing efforts for the long term. This requires unions to focus as much on earning a reputation for fighting for social justice for all workers as on adding to membership rolls.