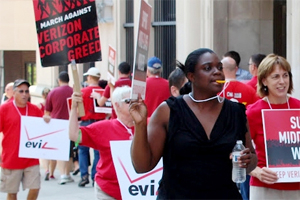 Leaders of the Communications Workers and Electrical Workers (IBEW) announced a tentative agreement with Verizon, but some workers say it’s far from what they deserve. Photo: Unity@Verizon.

Leaders of the Communications Workers and Electrical Workers (IBEW) announced a tentative agreement with Verizon, but some workers say it’s far from what they deserve.

The deal, covering 45,000 workers across the Northeast, was inked after 15 months of tense negotiations, including a two-week strike in August 2011.

The telecom giant won several important concessions. For the first time members would pay a portion of health insurance premiums. Workers retiring after January 1 would pay the same premiums as active employees for their retiree medical benefits. The unions also agreed new hires would receive a 401(k), not a pension.

The deal guarantees an 8 percent raise over four years, preserves the existing pension plan for current workers, and includes an $800 ratification bonus.

CWA officials said the best way to judge the contract was to look at what Verizon did not get. Takeback demands included freezing the pension plan, eliminating job security and movement-of-work protections, allowing unlimited contracting-out, and slashing sick time and disability plans.

“The reality of today in America is if you hold your own, that’s a victory,” CWA President Larry Cohen told the New York Times.

“Then we’re playing a game of looking at what other unions have lost,” said Rich Corrigan, a New York technician fired during last year’s strike. “Even though the company is at the height of profitability, you’re still saying, ‘it’s not as bad as other folks.’ The company is the victor.”

Gains include promises to hire 300 new full-time call center workers, as well as returning some contracted-out cable-laying work in New York State to the union.

“New hires already aren’t covered by the job security protection that pre-2003 hires have, and they don’t have the same retiree health benefits as those hired before 2008, and now they won’t have a pension,” she said. “They’re incrementally trying to dismantle the contract we have.”

Anita Matthews, a Manhattan central office technician and chief steward in Local 1101, questioned whether new workers will care about defending the pensions of senior workers when they don't have one.

“No union should do a two-tier system,” said Matthews, a 33-year veteran. “The future of the union will be nonexistent.”

CWA will hold a meeting of local presidents Monday. Leaders in some locals are talking of not recommending the agreement to members. Ratification votes will take a month to complete.

Informational pickets continue twice a week in front of company headquarters in Manhattan. “Now our chant is ‘vote no,’” Matthews said.

Increases in health care costs are proving controversial among members. The union accepted premiums for the first time. Along with other increased charges, CWA says workers will now bear the burden of 20 percent of their health care costs.

Health care outlays will steeply increase over the four years of the contract. Workers said they expect the company will demand even more next time.

“Since then everybody else has been forced to pay for health benefits,” he said, citing declining union density. “It’s very hard to be an island in an ocean like that.”

Pat Fahy, a member of IBEW Local 827 in New Jersey, said the contract was unacceptable and didn't think the unions should count it as a victory.

The contract would reinstate 37 of the 41 workers fired during the strike, but wouldn't grant them back pay. It’s not clear why three IBEW members and one CWA member were excluded.

“It could as easily be me, it could be any of the 41, or the 45,000,” said Corrigan, whose job would be saved. Picketers who were fired tended to be stewards or picket captains and they tended to be fired for inflammatory speech, he said.

Corrigan said the four missing workers breaks the deal for him. If the membership ratifies the contract, the union will drop Labor Board cases against the company for the firings, he said.

Master said that the 37 workers would simply be rehired, and would not have to go through the lengthy arbitration process. He acknowledged that it was important to get everyone their jobs back. “It was very clear that they aggressively fired people as a way of discouraging future militant strikes,” he said.

The company initially refused mediation on the contract, negotiators said in August.

"It's cut and dried that they want to break us," said CWA bargaining team member Billy Gallagher at the time.

CWA made “ready to strike” stickers and some workers cleaned out their desks in preparation for another walkout.

They rallied political support and met with community organizations and other unions to plan another strike. Master said that after that, and a 4,000-person march in Philadelphia, union negotiators reported more progress in three weeks than they had seen in the previous year.

Simultaneously, the unions were fighting approval of a deal between Verizon and several big cable companies which would allow the companies to bundle their services, and would substantially decrease incentives for Verizon to build out its fast fiber optic system (FiOS), which is installed by union members.

The deal was approved in August by the Federal Communications Commission and the Department of Justice over the objections of the unions, consumer groups, and the governments of several mid-sized cities in which Verizon has refused to invest. Opponents argue that the deal will cost jobs, continue to deny inner cities high-quality internet service, and leave consumers facing a near monopoly.

Safeguards in the new contract will prevent most jobs from being outsourced or moved. The union said the contract limits transfers to 35 miles from the worker’s home.

But the Verizon bargaining unit has lost half its members in 10 years through attrition, said Master, as the company moves its focus to profitable wireless and other expensive services.

After a 15-day strike in 2000 over job security, Verizon agreed to be neutral while CWA tried to organize workers in its wireless division. The company immediately reneged, though, even closing two call centers and reopening them in South Carolina to avoid organizing drives.

CWA did successfully organize 70 members in New York at Verizon Wireless, which meant that the company’s wireless stores were fair game for pickets during the 2011 strike.

But apart from this toehold, Verizon Wireless has successfully fought unionization.

“The challenge is how do we retain our power and expand our footprint in the industry,” Master said. “We’ve got to figure out a way to crack Verizon Wireless.”

Comcast workers get paid two-thirds what Verizon techs are paid, he said.

“We’ve got to lift those standards,” Master said. “We’re accountable for this.”

Related
Workers at Hooters-Style Restaurant Strike, Protesting Racist Sexist Manager »
Strike Wave Rocks Britain, as Unions Confront the Cost-of-Living Crisis »
‘No Contract, No Matisse’: Philadelphia Museum of Art Workers Win First Contract After Strike »
The Right to Strike Is at Stake on the Railroads »
After Strike Threat, Wisconsin Nurses Get a Possible Path to Union Recognition »

This article by Jenny Brown, in my opinion, is 100% spot-on accurate. She did an excellent job of showcasing the true, potential impact of the proposed contract. Lost in the discussion, however, is the fact that VZ unjustifiably layed-off 200+ CWA field techs in November of 2009 whom have yet to learn their fate via a 2.5 year arbitration case. Why weren't those dues-paying members considered during negotiations just as the fired members were? Is it because those members are part of the new, second-class, less meaningful second-tier? It should also be noted that the layed-off member's recall rights were violated by VZ last year when VZ decided to start hiring off the street to fill bargaining-unit jobs. Is this the future of the VZ labor force? Transient workers who pay union dues and get violated by VZ at every turn? What kind of security does that give to those who were hired prior to 2003?

The foundation as well as the perpetuity of the CWA has been undermined by shortsighted, rubber-stamp "leadership" for many years now. Change in leadership at every level of the CWA is the only hope current members have to get back and retain all that was fought for and won over previous generations by REAL leaders. Lets see how many Local Presidents DON'T recommend this contract to their members. Although I have a renewed hope in some of the Executive Boards since the last round of local elections, If history is an indicator, I would be surprised if any of the Local Presidents stand-up and see it (and more importantly, PRESENT it to the members) for the piece of trash that it is. True leadership requires doing whats best the members below, not the District and National leaders above them. Since when did givebacks become OK as long as you don't give EVERYTHING back that was initially asked for? That is a suicidal negotiating tactic. This is a GROWING industry, not one that is suffering; Therefore, labor deserves to be rewarded for its role in building and maintaing the business and be viewed as the partner it is rather than penalized and raped by VZ. Where have all the real leaders gone???? With this latest proposed contract, and the several before it, the rank-and-file is being led on a long DEATH MARCH by their trusted leaders. The direction needs to be changed ASAP.

For more info about the layed-off members, go to: www.verizonlayoffs.com

While your report is somewhat comprehensive there is a lot missing. Do you actually know what is in the agreement aside from speaking to a few people? I do not believe so. You didn't mention anything that is good in the contract. You failed to mention that the union faced a unionbusting management style that few workers ever have to face. Reading this article made my stomach turn.