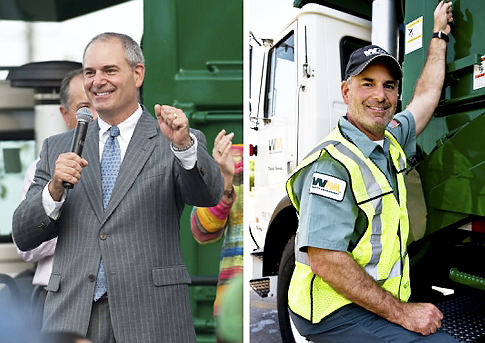 Larry O'Donnell spends a week doing jobs at the bottom of Waste Management's corporate ladder. But the joke's on us because he still goes home at the end of the day with his $3 million paycheck.

Want to know what chutzpah means? Look no further than TV's newest reality show, “Undercover Boss.” Apparently the titans of industry aren't satisfied that they burned our economy to the ground and got nothing but a slap on the wrist from Washington. They want us to like them, too.

“Undercover Boss,” which debuted on CBS after Sunday’s Superbowl, is a corporate charm offensive. For one week the CEO of a major company goes "undercover," performing a variety of jobs at the bottom of the corporate ladder.

Over the course of an hour we discover that the CEO is really a nice guy. We see just how ready top brass is to reward hard-working employees and to clean up problems on the front lines.

It's a blast from the Reagan-era past: CEO-as-hero.

You can't help but enjoy O'Donnell's ineptitude doing blue-collar work. He struggles to snatch cardboard off a recycling conveyor belt in Syracuse while his supervisor chuckles that he's working on the slowest line in the building. Almost on cue, O'Donnell misses a big piece and completely jams the machine, forcing everyone on an early lunch break.

In Florida O’Donnell gets fired for the first time in his life. His supervisor, Walter, cans him after he repeatedly fails to fill a trash bag with litter in less than 10 minutes. Walter can fill two bags of trash in that time—and he’s been on dialysis for more than 20 years!

And it wouldn’t be reality TV without an over-the-top moment—in this case O’Donnell vacuuming out the business end of a port-a-potty. For dramatic effect, the producers blur out images of a dirty diaper that O’Donnell excavates from one toilet.

We get a good laugh but the joke’s on us, because Larry O'Donnell still goes home at the end of a year with a $3 million salary.

O'Donnell is pitch-perfect as CEO-hero. He's unfailingly polite and full of aw-shucks Southern charm. A dedicated family man, he’s also got a personal tragedy that neatly ties back to his job. The O’Donnells’ daughter Linley suffered brain damage as an infant—apparently due to a doctor not following proper procedures. Now Boss O’Donnell says he makes safety a top priority.

Out in the field our CEO-hero oozes earnestness. We see O’Donnell soaking up life lessons, as Walter talks about staying positive while living with dialysis. He marvels at Fred, who has joked and high-fived his way through 10 years of shoveling shit (literally).

And he loses sleep fretting over Jaclyn—the harried landfill manager who’s doing the job of three or four people—but who still finds time to invite O’Donnell over for family dinner in the dream home she’s struggling to hold onto.

O’Donnell does a lot of hand-wringing over the company’s productivity standards—his pet project inside corporate headquarters—when he discovers that Janice, the garbage driver, is forced to pee in a coffee can if she wants to finish her 300 pickups within the 12-13 hours allotted.

Viewers never see O’Donnell in his natural habitat, crowing about squeezing more work out of his “team.” On an investor conference call he held in March last year, he bragged that in 2008’s fourth quarter the company shed more than 800,000 “driver hours” compared to the same time the prior year.

During O’Donnell’s watch, the company has been forced to pay an $8 million legal settlement after locking out 500 Oakland garbage truck drivers in 2007.

Although failing to wring concessions out of drivers in Oakland, the company got its way in Los Angeles, where workers turned down a bad contract and struck for 12 days but were forced to take a sub-par health package or face permanent replacement.

The company also provoked a four-week strike in Milwaukee in 2008, forcing workers to dump their traditional pensions and swallow 401(k)s.

In that conference call with investors last year, Waste Management blandly reported that “labor and employee benefits costs improved by $59 million in the quarter … with most of that cost related to the withdrawal from the Teamsters’ underfunded Central States Pension Fund.”

But far from showing any resentment over corporate policies that are running them ragged and stealing their retirement, the workers on this show are bowled over with gratitude for a bit of attention from the top brass. “I’m going to remember this day forever,” Janice says after her debrief with O’Donnell. “This is really awesome.”

“It means a lot,” Walter notes. “Because most people in a position that high—you never see them, they won’t take the time out to come down and see what you’re doing or even say hello.”

UGLIER THAN THE TRASH

On the show the dirtiest part of the job is the trash and human waste. But when the cameras aren’t rolling there are far worse things to see. Despite O’Donnell’s repeated avowals of his commitment to safety, Waste Management workers are three times more likely to get killed on the job than firemen, and 60 percent more likely than police officers.

One victim was Raul Figueroa, who was cut in half two years ago by a malfunctioning hydraulic arm on a garbage truck. His family later discovered that his supervisor had refused his requests for extra assistance and denied him access to a ladder so he could work more safely. After he was killed the company back-dated safety records and placed a ladder on the scene.

(For more on the health and safety problems at Waste Management read the report In Harm's Way commissioned by the Teamsters.)

Despite O’Donnell’s professed conversion experience—“I have got to change the way I go about my own job”—we find precious few specifics of what will change at Waste Management once the cameras go dark.

During the show O’Donnell “struggles” with the fact that his commitment to doing more with less forces Janice to pee in a coffee can. But when they sit down face to face, he doesn’t promise to lower the number of garbage cans drivers have to pick up—he says he’ll launch a task force to make Waste Management a more female-friendly workplace.

When Janice talks about supervisors in white pickup trucks who surveil drivers, O’Donnell says, “Route managers go around and do these observations, but I don't want our drivers to feel like they’re being spied upon, because that’s not what this is all about.”

What is it all about, then?

The CEO-as-TV-hero can’t utter that other p-word: profits. O’Donnell waxes eloquent about productivity, but never connects it to what he and everyone else at the top of Waste Management are focused on, fattening that bottom line.

O’Donnell does put Jaclyn on salary and folds her into the company’s bonus program—for doing the work of four people managing an upstate New York landfill. But how many other workers could get a pay bump from that $8 million they spent trying to break the union in Oakland? If Waste Management didn’t pay managers to spy on workers and buy cameras to track their every move?

BRING OUT THE PITCHFORKS

What is the viewer supposed to take from the show? CEOs are good people with families. Workers are dedicated and hardworking, and the suits in corporate can’t do what they do. But, as out-of-touch as decision-makers are, when they find out about problems they’ll fix them.

So “Undercover Boss” is really a sequel to the management fads of the 1980s and 1990s—employee involvement and team concept. Those programs told workers to “work smarter, not harder,” and bosses everywhere promised to listen to workers about how to run the company.

What we learned from Corporate America’s first charm offensive (dissected by Mike Parker and Jane Slaughter in Labor Notes’ Working Smart) is that yes, management wanted workers’ ideas—so they could use them to institute speed-up and tighter management control as well as to cut jobs.

Larry O’Donnell is just a tourist in the management-by-stress workplace that his predecessors perfected over the last 30 years.

Here’s hoping that Waste Management workers set their sights higher than a corporate pat on the head. After 30 years of getting dumped on, U.S. workers have a right to be angry.

If a few of them break out the pitchforks and torches, that would make for some great TV.

Mark Brenner is the former director of Labor Notes.
Related
Interview: If Only Unions Had Managed to Organize the South, Could Trump Have Been Avoided? »
Review: Tell the Bosses We’re Coming »
Book Review: Women on Strike—A Birth Strike »
TV Review: That Time the A-Team Helped Organize Farmworkers »
Book Review: Ants among Elephants »

Corporate America is the big bad wolf. Yep, I've heard it all before. The fact remains that Corporate America employs millions of Americans (safely) and allows them a better quality of life. That's a fact. Nothing is perfect but if you find a country of this size and magnitude (300 mill plus) where their people enjoy a better standard of living, let me know.

Thanks Mark. Your article doers a good job just bringing up a few of the issues that were glossed over about WM. It would be great if you were able to do the same for the other companies that will be portrayed so we can get it out in our shops, websites, and social media.

Mark
Try running your own company or even taking responsiblity for someone elses actions. I have no use for the whining people who can't do. so they bitch
GB

Great article Mark, your analysis of the show is the very reason I won't watch this drivel. Too bad someone didn't give him a "swirly" in the port-a-pottie

Reality TV was always a misnomer. This is one excellent piece of writing. Facts and opinions follow each other pungently. I would love to see this as an op-ed piece in some Sunday supplements in the "Entertainment" section, or anywhere. Good writing demands good distribution. Can we continue the reality tv context by phoning and telling him his pension has just be cut?