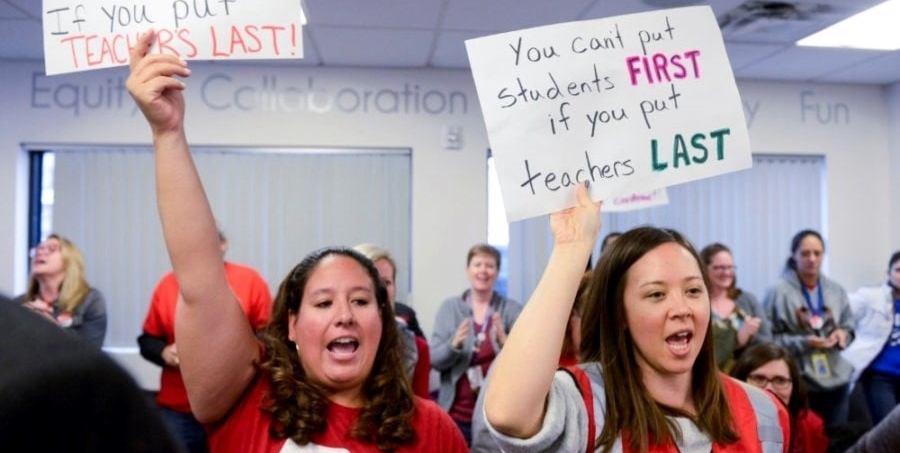 Joining a wave of reformers, high school teacher Tiffany Choi of the Caucus of Today’s Teachers just got elected president of the Denver teachers union—again. In a re-vote, Choi cemented her May defeat of a 10-year incumbent.

She ran on a platform that the union should partner with parents, involve members more in decision-making, and fight back against corporate education reform.

When the original vote was counted in May, Choi was leading by 16 votes. But the union’s board ordered a do-over, citing process issues.

Although the board didn’t specify what problems triggered the re-vote, votes from 10 schools hadn’t been counted because the number of votes in the ballot box didn’t match the member list of who had voted.

In the interim, the incumbent president stepped aside and his running mate, the newly elected vice president, acted as president.

The Baltimore teachers local had a similar situation in May, where incumbents ordered a re-vote. But in Baltimore, the challengers appealed to their national union, AFT, which investigated and ordered the election results to stand. Denver, affiliated with the NEA, had no such process.

And unlike the new president in Baltimore, Choi didn’t run with a full slate. There are caucus members and supporters on the board, but no majority.

After summer break, the new school year in Denver started with teachers protesting hot classrooms and demanding air conditioning. Choi and the caucus kicked off their re-vote campaign with school visits.

“We had a lot of one-on-ones,” said high school teacher Elizabeth McMahon. Choi and other caucus activists met with building reps to ask for support, and enlisted volunteers to campaign in schools.

Denver, like many U.S. cities, has seen more than a decade of charter school expansion, over-testing, evaluations used to punish teachers and close public schools, and an onslaught of legislation and school board decisions that weaken teachers’ rights as union members.

The caucus formed and supported Choi to push the union to fight for public education the way teacher unions have done in Los Angeles, Chicago, and Massachusetts.

This was the caucus’s second run at leadership spots. In 2016, it missed the presidency but elected the vice president and several board members, including Choi.

With the caucus pushing, Denver’s latest contract campaign marked a shift towards more member involvement. The union opened up bargaining; hundreds of members crowded into bargaining sessions. Union membership grew from just above majority to 70 percent.

“It’s nice to see, even on the heels of a successful strike, how many members really want change,” McMahon said.

In February, Choi was an active strike captain as Denver teachers went on strike for three days to get rid of merit pay in favor of steps and lanes. Merit pay was a system that incumbent President Henry Roman had worked to put in place in 1999. (He wasn’t yet president at the time, but acted as part of a union committee.) The strike succeeded in scaling it back.

Now that the contract is settled, Choi wants to continue the strike momentum, not revert to the old way of doing things. “We can’t just stay where we were,” she said. “We have to move forward.”

Choi and the Caucus of Today’s Teachers want to focus on building relationships with parents.

The strike was widely popular, even though Denver teachers were striking over their own pay. Choi said that means there’s even greater potential to team up with parents on shared issues. “If parents and teachers are working together,” she said, “we are so much stronger.”

They’ll need that strength for the next master contract, which is coming up in three years.

Previously the union separated pay negotiations out from the rest of the contract. But next time, pay will be on the table along with teacher demands for smaller class sizes and more staff to offer students behavioral and emotional support.