L.A. Teachers Showed Us How It's Done 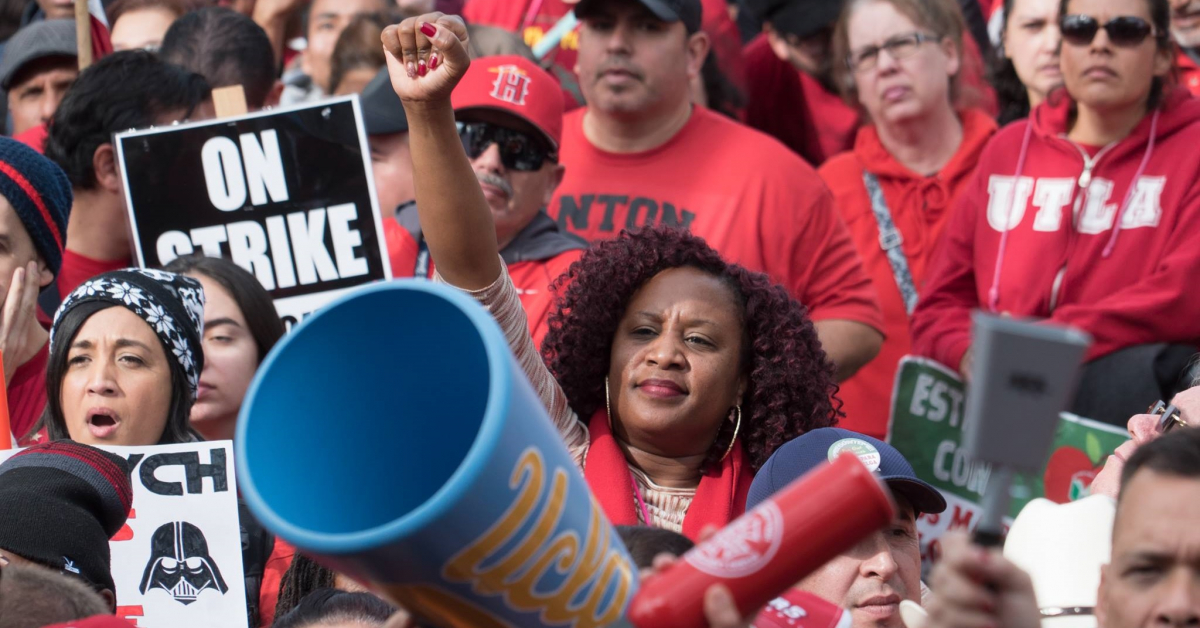 We've heard that strikes are outdated and don't work. The L.A. teachers strike should finally set that myth to rest. Photo: Joe Brusky

I spent an exhilarating week in the midst of the Los Angeles teachers strike—the first strike in 30 years by the second-largest teacher union in the country.

Of course wages and benefits were central to the teachers’ fight. But like many successful strikes, theirs was about something bigger—that the district should invest in public education as a public good, rather than stripping schools of their value and selling them off as parts.

And because the union had lifted workers’ expectations of what they can win, members were inspired and motivated to fight.

They organized themselves school by school, workplace by workplace. In a city where rain is rare, they braved a week of downpours and showed up to rallies in bigger numbers each day.

This strike was a long time in the making. It’s been 20 years since some of these same teachers first started building a caucus to transform United Teachers Los Angeles in the spirit of other reform movements they had read about in Labor Notes, including Teamsters for a Democratic Union.

Like many in our network, they were swimming against the tide as unions narrowed their focus and tried to stay alive by avoiding risks. The reformers instead wanted their union to aim higher, to build power in the workplace and the larger community.

They won officer positions and lost them again, had successes and stumbles, learned and regrouped—the way it often goes in organizing.

Then in 2012, Chicago teachers lit a fire across the country with their strike for “the schools Chicago students deserve.” Teachers in L.A. started their own “schools our students deserve” campaign. They were in touch with their Chicago counterparts before, during, and after that strike—which in many ways became a model for this one.

Along with Labor Notes, both groups helped found a lively national network, United Caucuses of Rank-and-File Educators, where teachers share experiences and discuss strategies. Today that network includes unions and caucuses all over the country.

In 2014 the Union Power caucus won leadership of UTLA. They ran on a vision of fighting for better schools and joining forces with parents to confront the billionaire privatizers. Once in power, they spent four years building rank-and-file leaders at every school and worksite.

The results spoke for themselves when 1,000 members showed up to a strike preparation meeting; when 50,000 people rallied downtown day after day; and when teams from each school organized their own picket lines to keep the pressure on.

A good strike does more than bring the boss to the table. It involves every member in conversations and decisions about their own lives and their own power.

I can’t think of a better way to celebrate Labor Notes’ 40th birthday.

What will it take to reverse the decline of unions? We’ve heard it all from labor leaders and experts over the years: Partner up with the boss. Merge and consolidate. Keep your head down. Buy glossy ads and billboards. Use a cell phone app to organize. Get the laws changed. Elect new legislators.

Some ideas are just plain wrong. Some are useful tools. But none can substitute for what really builds power.

We’ve been beating the same drum for 40 years, and we don’t plan to stop: you’ve got to organize at your own workplace and build a movement from there.

We've heard that strikes are outdated and don't work. We’ve been told that union democracy takes too long and is too messy to work on a large scale. The L.A. teachers strike should finally set those myths to rest.

A union’s power comes from its members—their ideas, their relationships, their organizing abilities. Channel all that energy in the same direction and what you get is what we saw at 900 schools across Los Angeles. It was a privilege to witness it.