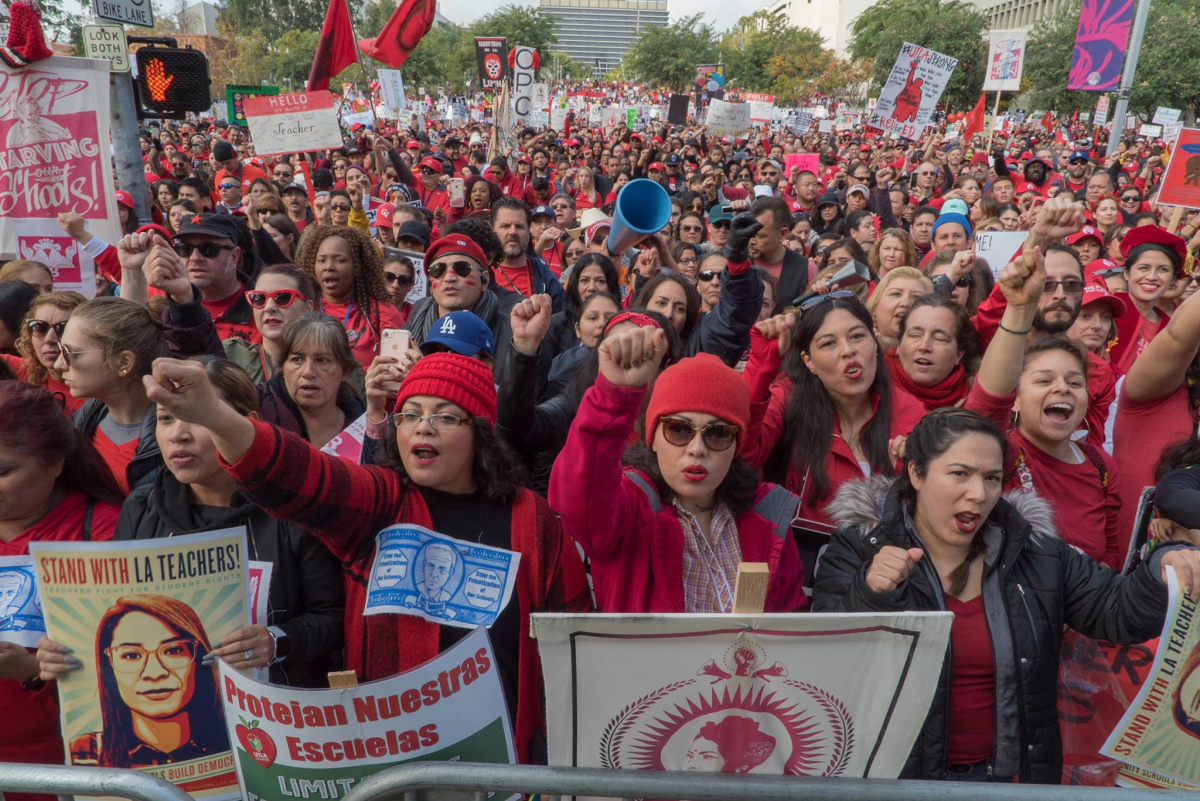 Rather than retreat or get cautious in the face of corporate attacks, the union went on offense, demanded fully funded public schools, and did the organizing to back up its demands with action. Photo: Joe Brusky

In a joyful, rain-drenched strike, 34,000 Los Angeles teachers won things no union has ever won.

They forced Superintendent Austin Beutner, a former investment banker, to accept concessions even on topics he had previously refused even to bargain over.

L.A. will reinstate limits on class size—and for most classes, reduce those limits by four students by 2022.

Despite a pro-charter school board majority, the nation’s second-largest school district agreed to move a board resolution to support a statewide moratorium on new charter schools

It will hire more nurses, librarians, and counselors; reduce standardized testing and random police searches of students; create an immigrant defense fund; and hand budget control of 30 schools over to local communities.

It’s a very different vision from what Beutner had in mind. In November the L.A. Times and Capital & Main had leaked his plan to carve up the district into clusters of schools run like competing stock portfolios. Any school judged to be an underperformer would be sold off like a weak stock.

Teachers were weeping at the mass rally outside City Hall January 22 as United Teachers Los Angeles Secretary and Bargaining Chair Arlene Inouye reviewed the high points of the tentative agreement.

Class size reductions. Gone is the hated Section 1.5 which allowed the district to ignore contractual limits on class size. Class size caps can now now be enforced, and when a class goes over the cap a new class will need to be formed. Further, for grades 4-12 class limits will be decreased by four over the next three years.

A full-time nurse in every school. Another 300 nurses will be hired over the next two years.

A full-time librarian in every middle school and high school. The district will hire 82 more librarians.

Progress on charters. The Board of Ed will support a statewide moratorium on charter schools—which is a big political step, though it doesn’t mean an L.A. moratorium. The union also won increased notice and voice in the process where charter schools are co-located in neighborhood schools.

Less testing. The district and union will establish a committee to cut the amount of standardized testing by half.

More counselors. The district will hire 17 more counselors to maintain one counselor for every 500 middle and high school students.

An immigrant defense fund, with a dedicated hotline and attorney for immigrant families

Community schools. Thirty schools will get this designation and additional funding. A council of local people will run each school’s budget, working with the community coordinator (a new union position).

A joint push by the union, the district, and the mayor for more school funding from the county and state. Mayor Eric Garcetti agreed to endorse the Schools and Communities First initiative on the 2020 ballot, which will close California’s commercial property tax loophole and restore $11 billion in funding to schools and other public services.

President Alex Caputo-Pearl told the crowd that this strike was "one of the most magnificent demonstrations of collective action that the United States has seen in decades.

Members returned to their school sites that the afternoon to review the tentative agreement—which was published online in full—discuss it with their co-workers, and vote on whether to accept the deal and return to work the next morning.

Some teachers around the city were frustrated at a process they felt was rushed. But members voted a resounding 81 percent yes on the agreement, and returned to their classrooms January 23.

In the face of the union’s demands, the district had cried poverty—it said it was running a deficit. But that didn’t appear to be true, since its reserves were growing each year.

The teachers set out to force the district to put its stockpiled cash into creating the “schools Los Angeles students deserve.”

From day one of the strike, huge majorities of teachers showed up at their schools every morning to hold the picket lines, together with parents and students. Then strikers and their supporters headed downtown for rallies that topped 50,000 the first day and kept growing.

The streets were full of joy. All week, everywhere we turned there was singing, dancing, spoken word, brass bands, mariachis. Teachers didn’t let the drenching rain daunt them; they suited up in ponchos, and laminated their song sheets and picket signs.

All across the city, people were talking about the strike and its demands—in coffee shops, on the bus, in stores, at the airport car rental.

In an effort to keep schools open for 600,000 L.A. students, the district brought in scab substitutes from private contractors. It offered current subs more than double their regular wage to work during the strike.

But in L.A., the subs are part of the union. Very few chose to cross the picket lines.

Read more about how L.A. teachers overhauled their union and got organized at every school as they built towards this strike.

L.A. is the biggest U.S. school district with an elected school board. (The biggest district, New York City, and third-biggest, Chicago, are both governed by mayoral appointees.)

Year after year, its school board elections have broken spending records. Corporate education reformers spent $13 million in the last election, most of it coming from the foundations of the Walton family (the owners of Walmart) and Eli Broad, two of the biggest spenders nationally in support of charter schools, vouchers, and privatization.

That money was enough to win them a majority of the seats on the school board. And after the previous superintendent resigned early last year for health reasons, that majority handpicked a superintendent, Beutner.

But as it turned out, a bought and paid for board and superintendent weren’t as powerful as a good old-fashioned strike.

Readers who work in education or the public sector will be familiar with the claim that “the money just isn’t there.” UTLA refused to buy into it, and named the privatization schemes behind it. Rather than retreat or get cautious in the face of corporate attacks, the union went on offense, demanded fully funded public schools, and did the organizing to back up its demands with action.

The teachers won big—and provided us all a model for how to fight back. The victory, said Caputo-Pearl, renewed “the strike not only as the last resort, but as something you do to build a social movement.”

A version of this article appeared in Labor Notes #479, February 2019. Don't miss an issue, subscribe today.
Barbara Madeloni is Education Coordinator at Labor Notes and a former president of the Massachusetts Teachers Association.barbara@labornotes.org
Related
Seattle Teachers End Week-Long Strike »
Ten Years Ago, Chicago Teachers Gave Us All a Jolt of Hope »
How Educators in Brookline, Massachusetts, Won an Illegal Strike »
Minneapolis Strikers Demand a Living Wage for the Lowest-Paid Educators »
This Year, Let's Coordinate Our Contract Fights to Bargain for the Common Good »