Another Walkout, Car Blockade: This Week in the Battle to Save the Oshawa Assembly Plant 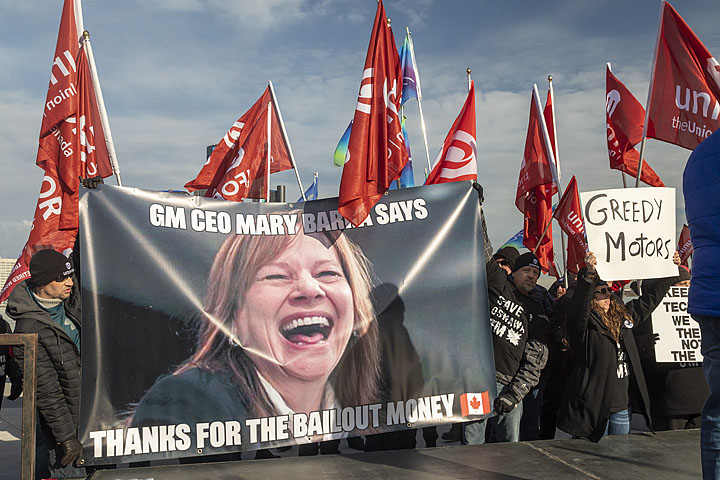 Last week we interviewed Oshawa, Canada, auto worker Tony Leah about the plant occupation that rank-and-file workers organized to protest the planned shutdown of their General Motors factory. Meanwhile their national union, Unifor, held a rally on January 11 in Windsor, described below and in a separate report by Labor Notes Business Manager Adrian Montgomery. Here Leah describes new developments since then, including a walkout by a different Unifor local whose members supply parts to the threatened plants in Oshawa and Detroit-Hamtramck, and a two-hour blockade of the plant by workers circling in their cars. –Editors.

This has been a week of some great workplace actions, some blustering rhetoric, and some disturbing efforts by Unifor leaders to contain and defuse worker militancy.

Friday, January 11: Unifor held a rally in Dieppe Gardens, Windsor, directly across the Detroit River from General Motors headquarters. It made a great background for the photo ops.

Busloads of Unifor members and retirees arrived from Oshawa and a number of other areas in southwestern Ontario. I would estimate 1,000 people attended and listened to speeches for 45 minutes.

Unifor President Jerry Dias was the main speaker. He talked tough, but in generalities. He demanded a meeting with the Premier of Ontario (right-wing populist Doug Ford), Prime Minister Justin Trudeau, and GM CEO Mary Barra.

Demanding a meeting, of course, is just words unless you back it up with action. The same goes for his threat to bring the message to reporters attending the Detroit Auto Show the following week.

He said “General Motors, you haven’t seen anything yet.” But will he follow through?

Support from other unions was limited. Smokey Thomas, head of the Ontario Public Service Employees Union, was the only speaker from another union. He is one of Dias’s few allies in the labor movement, especially since Dias pulled Unifor out of the Canadian Labour Congress a year ago.

That disaffiliation clearly has hurt efforts to broaden this fightback. And even before that, Dias and Thomas were isolated at the Ontario Federation of Labour convention in November 2017 when they tried desperately to block a resolution for the labor movement to back the social-democratic New Democratic Party in the 2018 Ontario election. Both leaders have preferred a cozy relationship with the pro-business Liberal Party.

Unifor members who attended the rally showed solidarity and a willingness to fight GM. Some activists from Detroit also attended. (Among them was Labor Notes Business Manager Adrian Montgomery. –Editors) They (and I) handed out flyers for a rally to be held at the Detroit International Auto Show today, sponsored by the Coalition for a Green New Deal. There was a quite friendly response to the flyer, and to the idea of common actions by U.S. and Canadian auto workers.

Monday, January 13: Jerry Dias had meetings with Doug Ford and Navdeep Bains, the Canadian Federal Industry Minister. By Dias’s account, they both pledged to support keeping the Oshawa plant open when they met with GM officials. Predictably, the only result was that GM repeated its determination to close Oshawa.

This walkout exposed some of the vulnerabilities of the closely integrated automotive industry.

Over the years, thousands of jobs have been outsourced from the auto majors to a fragmented collection of supplier companies as a technique to drive down wages, eliminate pensions, and drastically cut benefits. But this leaves companies like GM in jeopardy if any supplier company goes on strike too long.

Without the parts from Inteva, the Oshawa and Hamtramck plants might have to shut down.

GM makes an estimated $15,000 profit on each truck we make in the Oshawa plant. The company is still hoping to generate $1 billion in profit from the trucks we make here before the scheduled shutdown.

The walkout at Inteva brought significant press coverage to the low wages and working conditions there and at other suppliers. It highlighted the realities of supplier workers who are actually the “third tier.”

However, the Inteva workers went back to work after 24 hours, without having much impact on GM’s production.

Despite Dias’s threats to follow up Tuesday’s action with more actions on Wednesday, Thursday, and Friday, there have been no further supplier events.

Thursday, January 17: There was a good turnout at the GM Unit meeting in Oshawa, and strong support for continuing the fight to keep the plant open. However, union leaders at the meeting argued that the campaign could be won by public relations, not workplace action.

Plant Chair Greg Moffatt went so far as to say that workers no longer had to occupy plants or have sit-downs like we did in the past.

Unifor’s public relations firm has apparently convinced our leadership that the campaign can be won by running ads on TV, including the Golden Globes. Moffatt intimated there would even be an ad during the Super Bowl. Apparently money is no object if it is going to Jerry Dias’s favorite public relations company.

Moffatt bragged that the video of the January 11 rally had been viewed 50,000 times—he said that was reaching more people than a plant occupation would!

Local members challenged the leadership on a number of points. They called for a major rally in Oshawa, demanded better communication with the members, and raised the demand for electric/autonomous vehicles to be built in Oshawa.

The questioning was cut short by a call for everyone to get in their cars and ring the Oshawa GM plant. Members participated enthusiastically, since it was a concrete way to hit back at GM.

For almost two hours, cars with Unifor flags flying prevented truck deliveries. Although the disruption to production was minimal, it does show that there are many ways members can exercise their power.

Friday, January 18: I am about to get on a bus with Local 222 members who are going to Detroit to participate in the protest rally against GM’s plant closure at the Detroit International Auto Show.

The Detroit rally has been endorsed by the Unifor Local 222 Retired Workers Chapter and the Local 222 PAC.

We are all excited to be carrying out an action in solidarity with autoworkers from the U.S. Hopefully this is a first step to much more global solidarity.