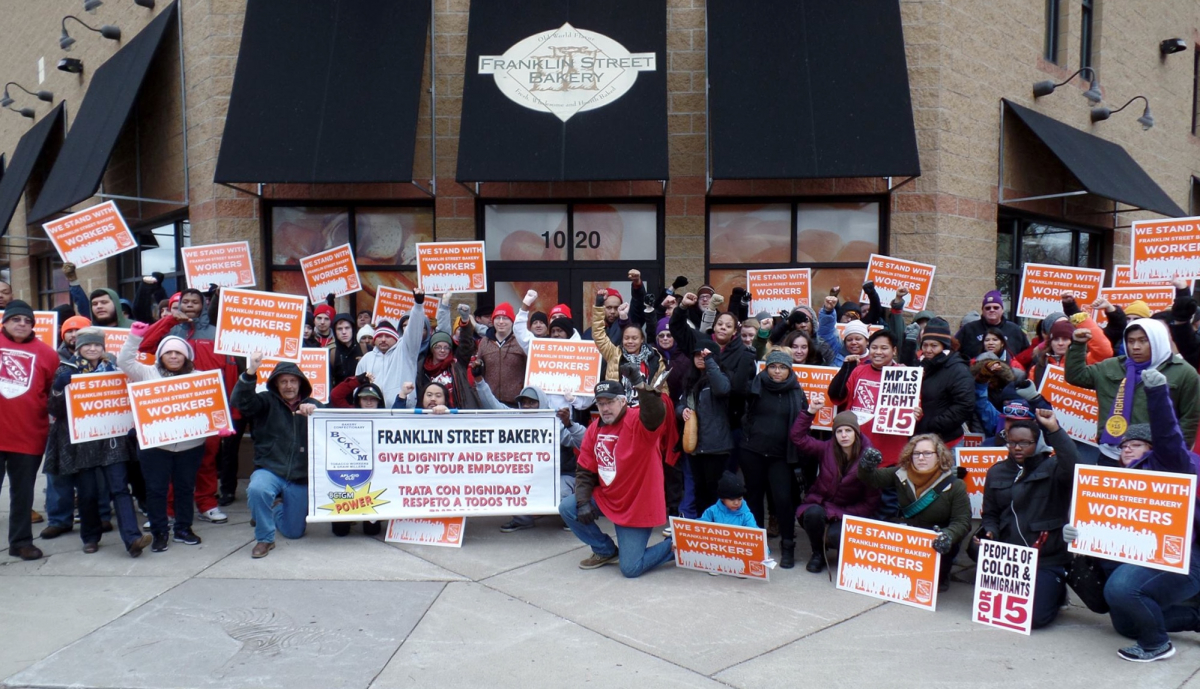 While their boss hobnobbed with football stars at an opulent fundraiser for food banks, bakery workers organized their own event to make the point that their low wages force them to rely on food banks themselves. Photo: BCTGM Local 22.

Every year on the eve of the Super Bowl, celebrity chefs, National Football League players, and Hollywood stars come together in the game’s host city for an opulent fundraiser for local and national food banks. It’s called the Taste of the NFL.

“The most mainstream dish” in Houston this year, the Star Tribune said, was “veal meatballs and a cheesy pasta with truffles.” Since its founding a quarter-century ago, the event has raised $15 million for food banks.

But while their boss hobnobbed with the NFL aristocracy, a group of low-paid bakery workers in Minneapolis staged an event of their own—the Taste of Justice.

It turns out that Wayne Kostroski, who founded the Taste of the NFL, also owns Minneapolis’s Franklin Street Bakery, where he has been fighting a union drive. And ironically, workers say, Kostroski pays poverty wages—leaving many of his employees with no choice but to rely on food shelves.

“I have gone to food shelves myself, because the money that they pay me isn’t enough,” said Julio Varies, a machine operator in the bakery. “I have a wife and a nephew, and my brother and I support my mother back in my country. I don’t go that often, but sometimes I have to go because I don’t have money.

“The owners are hypocrites,” he said. “They have to start at home.”

The 100 workers have been holding protests and organizing with Bakery Workers (BCTGM) Local 22 for seven months.

According to workers, many earn around $11 an hour, though Franklin Street Bakery claims the average wage is $13.60. Some workers say they haven’t had a raise in years. Their health care is unaffordable at those wages—over $200 a month for premiums—and their paid time off is miserly, with only six sick and vacation days.

Workers report that their managers bully them, yelling and cursing. Out-of-date machinery creates dangerous working conditions. And before the organizing drive, bakery management circulated a memo declaring that workers weren’t allowed to speak their first languages on the job.

The workforce is majority immigrants—mostly Spanish-speakers, with some workers from Somalia and other East African countries who speak other languages. After workers complained, the language memo was eventually withdrawn.

To prepare for the campaign, BCTGM Local 22 hired a Spanish-speaking organizer and reached out to the Center for Workers United in Struggle (CTUL), a Minneapolis worker center with experience organizing low-wage immigrant workplaces, for advice.

A decade ago, workers at this bakery lost a union election by 12 votes after the employer waged a bitter campaign.

Kostroski has not taken the new organizing drive lightly, either. Since the campaign began, workers have filed 50 unfair labor practice (ULP) charges with the Labor Board, alleging that bakery management has interrogated them about their organizing, threatened them with plant closure or personal retaliation, and punished them for union activities by sending them home early.

Organizers realized early in the campaign that the bakery was violating workers’ rights. They trained the workers on how to report violations.

Vaires filed one of the ULPs. He was written up without investigation after someone dropped a piece of metal in a machine. He believes the write-up was in retaliation for attending protests and talking to his co-workers about the union.

The Labor Board has found merit in all the ULPs, and even added charges. Local 22 and Franklin Street Bakery negotiating over a settlement.

The community-driven Taste of Justice was a stark contrast with the Taste of the NFL. Workers and their allies brought dishes to share. State legislators, city council members, and leaders from the Ventura Village Neighborhood Association, where the bakery is located, listened as workers described their campaign and the repression they’ve faced.

Other Local 22 members showed up in solidarity. Frazier Turner, who works at Treehouse Foods, said he was “almost in tears hearing from the non-union workers.”

One worker he heard from “was hurt so badly she almost couldn’t work, but the company told her she had to stay,” Turner said. “They wouldn’t even let her take medication.

“It was barbaric. I couldn’t believe it. I thought those days were behind us.”

This June Kostroski plans to host a new event in Minneapolis, the Taste of the Vikings. The union is preparing a local counter-event if necessary. “We are going to keep fighting until we win the union,” says Vaires. “Whatever it is we have to do, we are ready.”

Next year’s Super Bowl and Taste of the NFL will be held in Minneapolis.

Steve Payne is an organizer with a labor/community coalition in the Twin Cities. Join him and workers from around the region on March 18 at the Labor Notes Twin Cities Troublemakers School.