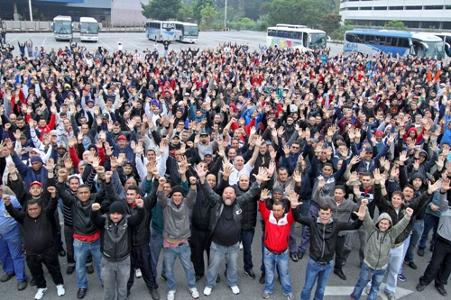 Brazilian auto workers have launched a series of strikes in recent weeks, defending themselves against a wave of mass layoffs.

On Thursday, September 10, 4,300 workers went on strike at Ford’s Sao Bernardo do Campo plant after the company announced 200 layoffs.

This strike comes on the heels of a number of others that have shaken the Brazilian auto industry. At the beginning of August, General Motors in São José dos Campos fired 798 workers, sparking the first strike. Workers there stayed out for 14 days until the company agreed to convert the permanent dismissals into temporary layoffs.

The GM workers are part of my union, the Metalworkers Union of São Jose dos Campos. We’re affiliated with the Popular and Workers Center (CSP-Conlutas), which is independent of the country’s ruling Workers Party.

Then Volkswagen workers in Taubate—members of the CUT, Brazil’s main union federation—struck for 10 days and got the firing of 50 workers reversed. The announced job losses were in violation of an agreement that was supposed to guarantee job security through 2017.

And in São Bernardo do Campo, a city with a strong tradition of struggle, workers at Mercedes-Benz (also members of the CUT) went out on strike August 24 against the permanent dismissals of 1,500 workers—15 percent of the plant’s total workforce. Mercedes had already let go 500 workers in May.

Mercedes announced August 31 that it was rescinding the 1,500 firings. Instead, the union agreed to an Employment Protection Program, an initiative recently created by President Dilma Rousseff. This means their jobs will be guaranteed for a year, but their working hours cut by 30 percent. The Brazilian government will pay half the lost wages; workers will lose the other 15 percent.

Spurred by corporate tax cuts and loan incentive programs for car buyers, automakers in Brazil between 2007 and 2011 sent $21 billion in profits to headquarters abroad. But after a decade of record profits, automakers and parts suppliers are now facing declining sales.

Some companies have attempted to maintain their profit margins by raising prices to consumers, but in a stagnant economy, this strategy hasn’t worked.

So rather than simply tolerate lower profits for awhile, they’ve begun restructuring production—which means massive layoffs and demands for concessions. Between January and August, according to union tallies, 8,800 auto workers lost their jobs.

Auto executives see the market slump as reason enough to dismiss workers and reduce the rights of the remaining workforce. They’re pushing unions to accept lower wages and unpaid overtime, and to allow the layoffs of injured and senior workers in favor of younger, lower-paid hires.

Ironically, it was the CUT and the Workers’ Party who won such protections as job security for injured workers, through great struggle and strikes in the 1980s. Today the same Workers’ Party, now in power, is trying to do away with these rights.

These attacks come even though the auto sector has received more than $3 billion in tax exemptions over the last three years by Rousseff’s government.

There’s no end in sight. Another group of automakers intends to cut production in September, putting at least 15,600 workers onto forced vacations that average three to four weeks. These forced vacations make it difficult for workers to use their time off for trips with their families.

Fiat, the country’s largest vehicle manufacturer, produces 15 models of cars and employs 19,000 workers in the city of Betim. It’s has been conducting constant layoffs since 2014, and currently has 3,000 workers on forced vacation.

Volvo has decided to close one of the two production shifts at its truck factory in Curitiba, suspending 600 employment contracts. At Ford’s São Bernardo plant, 234 workers had their contracts suspended. Iveco, the truck manufacturer, plans to temporarily lay off 300 workers on its heavy truck line in Sete Lagoas.

In the São Bernardo Volkswagen plant, around 220 employees have had their employment contracts suspended for five months. Another 800 were encouraged to resign. At the São José dos Pinhais Volkswagen plant, 450 will go on forced vacations.

Mitsubishi decided to bring forward the year-end vacation and temporarily lay off most of the 3,000 employees at its plant in the city of Catalão. And Chery, the Chinese automaker, has placed 200 workers on vacation.

The Rousseff government’s Employment Protection Program was prepared by leaders of the two biggest trade union federations, Força Sindical and the CUT, which is connected to the ruling party.

Even as workers come under attack, auto companies are still announcing a promising future for Brazil’s auto market. So far in 2015 they’ve committed $2.5 billion in investments for research centers and assembly lines for new families of vehicles. And the Brazilian government continues to provide the auto industry with such benefits as low-interest loans and tax exemptions.

Our independent union federation, CSP-Conlutas, opposes the Employment Protection Program, since it protects profits instead of jobs. Despite its name, the program’s advantages are all for the companies, which enjoy a 30 percent reduction in labor costs.

We believe the government and companies are taking advantage of the economic crisis—at workers’ expense.

Our union federation argues that it’s time for auto workers to take to the streets and compel the capitalists to pay for the crisis. We’re calling on Brazilian auto workers to join us in demanding stable jobs, a shorter work week of 36 hours without a cut in pay, and nationalization of any multinational companies that insist on layoffs.

CSP-Conlutas and other social movement organizations and left-wing political parties have called for a September 18 national day of demonstrations against corruption and the austerity plans.

Herbert Claros is vice president of the Metalworkers Union of São Jose dos Campos, and on the international board of CSP-Conlutas.

Related
Auto Workers to Vote on Direct Elections »
General Motors Returns to Oshawa—But Offers Only Second-Tier Jobs in a ‘Pop-Up’ Plant »
Canadian Auto Workers Fight for Contract Transparency »
Can Auto Workers Win the Right to Vote? Here's How Teamsters Did It »
Viewpoint: When Auto Plants Reopen, Some of Us Will Die for Corporate Profit »