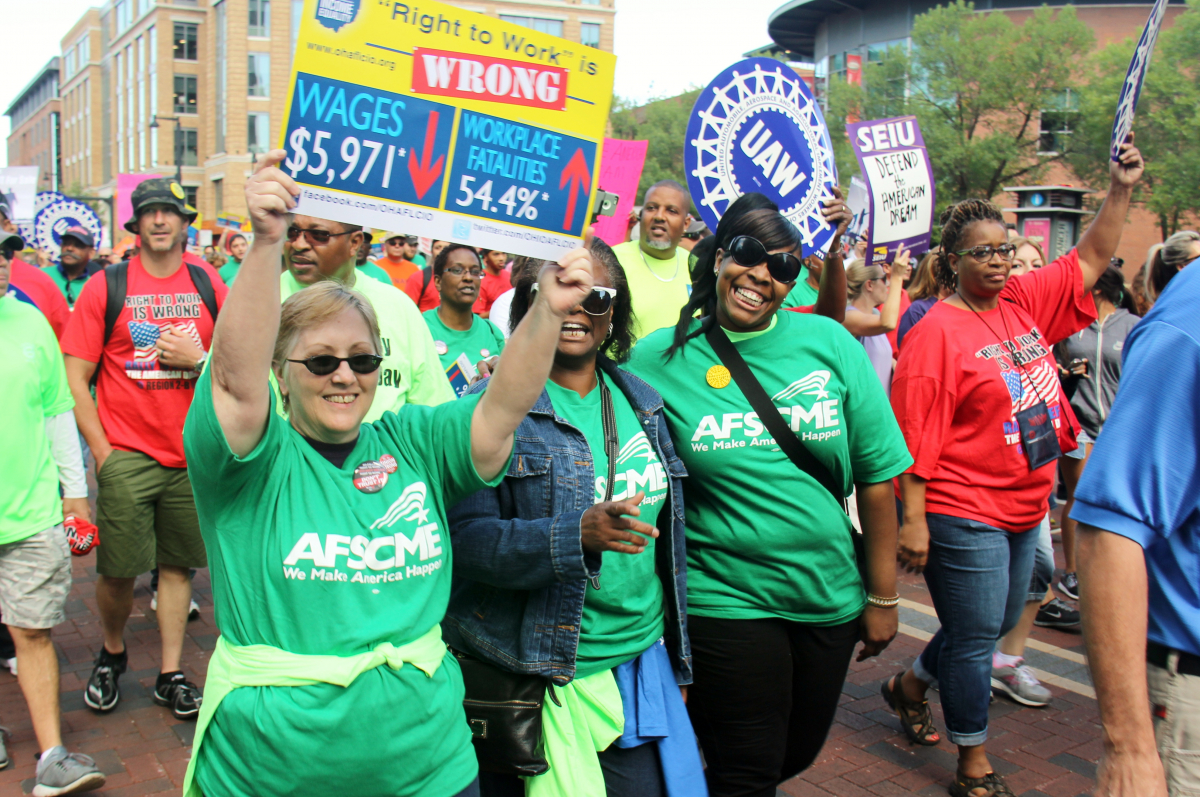 Three thousand union members and supporters from around the state poured into Columbus, Ohio, August 21 to protest a convention of Americans for Prosperity, funded by the billionaire Koch brothers.

They stepped off buses and into a carnival atmosphere. The Auto Workers (UAW) sent the largest contingent, 10 buses full of protesters in red T-shirts. AFSCME workers and retirees wore green.

Teamsters in black shirts and Steelworkers in blue mixed with teachers and a huge Food and Commercial Workers delegation. A big group of Bernie Sanders supporters mingled in their “Feel the Bern” shirts. A giant puppet of Wisconsin Governor Scott Walker was there too.

The Americans for Prosperity confab was slated to showcase appearances by GOP presidential candidates Jeb Bush and Bobby Jindal. The corporate media—obsessed with the horserace of super-wealthy candidates competing to put forward the most pro-corporate program—would have preferred to cover it without distractions.

In what was billed as a “major campaign speech” at the conference, Bush called for Republicans to “reach out” to African Americans and working families. “They’re really conservative,” he claimed, “they just don’t know it.”

But that message was drowned out by the thousands of angry protestors. The demonstration took over the front page of the conservative Columbus Dispatch. All the TV stations had to pull their main coverage away from the Koch brothers’ group, and focus instead on the demonstrators calling for democracy and worker’s rights.

“The corporate politicians love to talk about ‘takers and makers,’ as though they’ve ever made anything in their entire lives,” Rev. Susan Smith told the crowd. She’s an African American leader of a large local progressive faith grouping, BREAD.

“Every road and every bridge, every school and every home, every hotel and building, everything, was made by you!”

Ohio AFL-CIO President Tim Burga said the labor fed had called the rally to “stand up to the Koch Brothers and their billionaire agenda of busting unions, destroying pensions, privatizing Social Security and Medicare so that they can enrich the few while impoverishing the many.”

Organizers had predicted that 1,000-1,500 would attend, and 2,000 would be a tremendous victory. The actual turnout was “overwhelming,” said Ohio AFL-CIO Political Director Matt Smith.

While it was a diverse crowd, the majority of attendees were retired workers.

“I was in Vietnam and worked my whole life in the mill,” said Paul Santilli, president of Massillon chapter of the Steelworkers Organization of Active Retirees. “I’ll be damned if we can let a tiny handful of billionaires steal our nation.”

Local retiree groups have been raising the alarm about another round of Congressional attacks on Social Security and Medicare, “programs that American retirees won, through difficult struggles,” said Norm Wernet, president of the Ohio Alliance for Retired Americans. “They’ve paid into these important programs that keep our entire economy above water.”

Mike Walden led a delegation of Teamsters who are facing pension cuts—the first casualties of a sneaky provision that was tacked onto the Cromnibus spending bill pushed through Congress last year, allowing cuts to the benefits of retirees in multi-employer pensions.

Trustees of the enormous Central States Pension Fund have warned pensioners they intend to make big cuts, and they’re supposed to announce the details around August 31. Meanwhile Teamsters rank and filers are mounting a grassroots campaign to stop them.

“We’ve seen the Koch brothers’ type of prosperity, and it doesn’t work for regular working folks,” Walden said, citing threatened pension cuts of up to 65 percent. “If that’s prosperity, it’s not for us!”

“We’re all with Bernie,” Walden added. “We’ve filed lawsuits and are asking for help. Bernie [Sanders] introduced a bill that would restore our pensions, and Sherrod [Brown], Marcie Kaptur, and [Tim] Ryan have supported it. He stood up for us while the rest just talk!”

Betty Thomas, a “proud AFSCME member and Hillary [Clinton] supporter,” led a delegation of public workers from Cincinnati. Unions there beat back a 2013 ballot initiative that would have wiped out public workers’ pensions and replaced them with 401(k) plans.

“They tried to destroy public workers’ bargaining rights in Cincinnati,” Thomas said, “but we all stood up together and showed that we won’t be intimidated.”

As the cheering crowd marched the few blocks to the Convention Center, police lining the route were friendly, even supportive. One cop shouted, “This is the backbone of America! I’m proud to be here!”

“We won’t go back, not even one step,” declared Deidra Reese, leader of a labor and community voting rights coalition.

“The billionaires try to steal everything we’ve fought so hard to gain,” she said, “then try to drive us back a hundred years by denying people the right to vote. We won’t go back!”

CORRECTION: This article has been corrected to reflect Rep. Tim Ryan's name, at first misprinted as John Ryan.

Related
Undergrad Workers Organize Wall-to-Wall at Kenyon College »
Racial Disparities in COVID-19 Point to Need for Medicare for All »
How Medicare for All Would Fix Both Public Health and the Economy »
Toledoans Rally behind Hospital Strikers »
Janus for the Rails and Air? »