Springtime Troublemaking, and Big News for 2016... 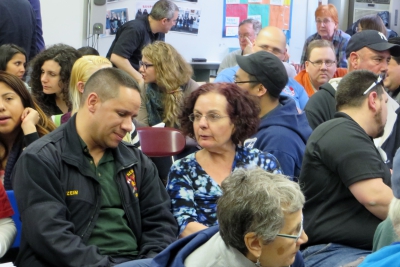 Check out photos from the New York City Troublemakers School and mark your calendars for our next national conference.

Local committees are organizing upcoming schools in several other regions. Portland, Oregon, is hosting its second school in May, this time with a particular focus on internal organizing. A New England school in late June will include lessons from this winter’s long strike by FairPoint workers.

Chattanooga, Tennessee, is planning a school in late July or early August. And efforts are afoot for schools later in the year in Minneapolis, Seattle, and Los Angeles.

To get involved, contact samantha[at]labornotes[dot]org and we’ll put you in touch with your local crew.

At the New York school we also announced some big news: we’ve just inked a contract with the Hyatt Regency O’Hare Hotel in Chicago, where we’ll hold the next biennial Labor Notes Conference, April 1-3, 2016.

Save the date! As you see in the photos, many troublemakers were ready to declare "I'll be there" right away. Last year’s conference broke the record with 2,100 attendees, and we’re excited to be growing into a bigger venue.

And speaking of growing, we’re lucky to have two wonderful people joining the Labor Notes staff.

Sonia Singh, our new staff writer/organizer, spent 12 years organizing with the Workers’ Action Centre in Toronto. Dan DiMaggio, our new assistant editor, has most recently been a researcher for the Operating Engineers in Miami.

Just in time to make room for Sonia and Dan, we’re completing renovations to our New York office. Thanks to volunteers Laurel Parker, Pam Galpern, and David Brenner for their generous help.

Unions Are Beginning to Talk About Staving Off a Possible Coup
Your Letters and Parcels Are Piling Up Thanks to the New Privatizer General
Review: Forty Years of Working-Class Films
Trump’s Anti-Worker Labor Board