In the Face of Austerity, Portuguese Dockers Win Back Union Jobs 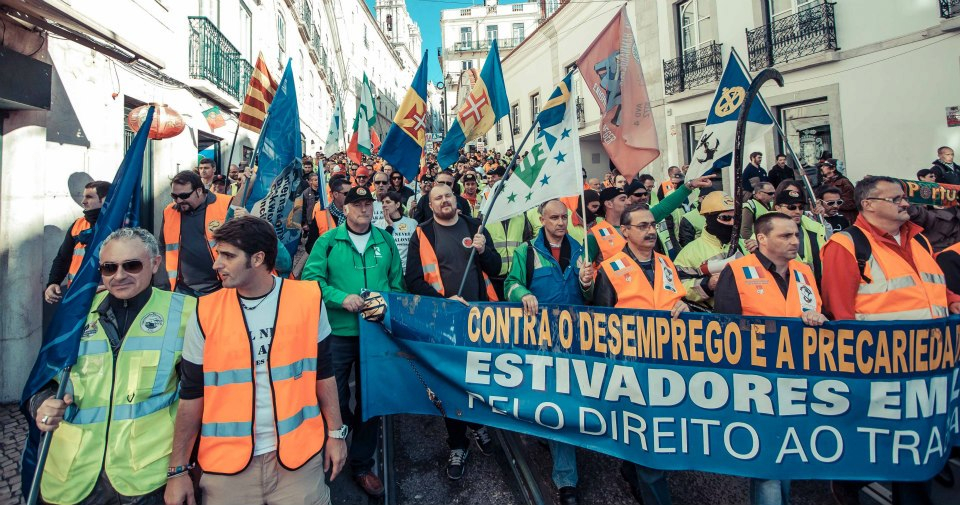 With a crucial assist from their counterparts in Spain, Lisbon dockworkers beat back job cuts being pushed by the Troika of international banking institutions. Photo: Sergio Sousa.

In the video “A guerra dos portos” (War of the Ports), hear dockworker activists from across Europe talk about what this fight has meant to them. Video: Renato Teixeira.

In a time of global economic crisis, many unions feel they have no choice but to focus on just minimizing concessions.

But dockworkers in Lisbon, Portugal, who refused to follow suit have garnered widespread support—setting an example of how organized workers can use solidarity to resist austerity. With a crucial assist from dockworkers in Spain and elsewhere, they won reinstatement of their fired, non-union co-workers.

Portugal has been among the European countries hit hardest by the crisis. Unemployment has reached Depression-era levels, climbing past 40 percent for younger workers.

In the name of stimulating the economy and cutting costs, longtime social rights and benefits have been severely eroded. For example, the number of hours in the workweek has increased. So has the retirement age. And the number of national holidays recognized annually has been reduced by four.

Average wages in Portugal, which already had the lowest minimum wage in Western Europe, have fallen dramatically. Legislation passed during the crisis has undermined unions’ ability to negotiate contracts. The numbers of collective bargaining agreements and of union members have declined significantly.

Assault by the Banks

The Portuguese government’s May 2011 memorandum of understanding with the Troika called for an array of legislative measures targeting working people.

Most relevant for the dockworkers was a provision to narrow the definition of dock labor (shrinking the group of workers who get extra protections beyond those in the general labor law) and to impose other anti-labor measures benefiting port employers. The target date for implementation was January 2012.

After legislation was introduced to carry out these changes, nearly all Portugal’s ports struck in protest, delaying the law’s passage well past the target date.

The International Dockworkers Council, one of two international organizations of European dockworkers (the other is the European Transport Workers Federation, ETF), organized a November 2012 protest that brought hundreds of workers to Lisbon for the largest pan-European dockworker protest in several years. It sent a strong message of unity to the employer, the government, and the Troika.

But the law eventually got through at the end of 2012, and went into effect in February 2013. The dockworkers began negotiating a new collective bargaining agreement, which now had to be in compliance with the new anti-union law.

At the beginning of 2013, 18 casual dockworkers from the Lisbon union pool were dismissed.

This followed the new law’s revised definition of which jobs were part of the union labor pool—though it violated the contract still in place at the time. In July, another 29 additional casual dockworkers were dismissed. The union believed the employers had dismissed the 47 workers as part of a long-term strategy to create labor scarcity, in order to justify the creation of a second non-union labor pool at the port.

The employers tried to bring in scabs, so the union decided to shift its own strategy. In Lisbon the dockworkers moved toward “protection strikes”—meaning they only stopped work when scabs were brought in, and the maximum they stopped per day was four hours.

Protection strikes were a legal means for the dockworkers to prevent scabs from working the ships. For a time the strike threats dissuaded the employers from following through, but at the end of year, they succeeded in bringing in scab labor.

Despite the fact that the casuals are not members of the union, reinstating the 47 casual dockworkers employed through the union labor pool became the Lisbon dockworkers’ union’s rallying cry. The union also demanded:

All year, the union dockworkers financially supported the dismissed casual workers so that they could continue to fight for their jobs and not have to find other work. The campaign to reinstate the fired workers became an important factor in garnering public support for the union.

Working with the Unemployed

Meanwhile, outside official union channels, a group of rank-and-file members of the Lisbon union had formed an activist organization, Estivadores Solidariedade (Dockworker Solidarity). These were members who felt their leaders weren’t doing enough to prevent the law from being implemented.

In particular, they wanted to reach out to the broader community, to counteract the employer/media message that privileged workers were disrupting the ports for their own narrow interests. They began working with others who were inspired by their fight, including social movement organizations of unemployed workers, rank-and-file railway workers, nurses, and call center workers.

The group set up a Facebook page and retained a left-wing activist as its communications specialist—both helpful in combating the media disinformation campaign against them. The Facebook page also became a way to make direct contact with rank-and-file dockworkers in other countries. These rank-and-filers sent messages of support, made plans to participate in the November protest in Lisbon, and built solidarity efforts in their local ports.

Some of the Estivadores Solidariedade activists ran for union office in 2013, on a platform of social justice unionism, and won.

The outside support bolstered the dockworkers’ resolve as they faced the very difficult situation inside the port. Contract negotiations dragged on; progress was very slow.

As the law’s February 2014 deadline approached, the dockworkers resumed their strikes. International allies stepped up support too. Dockworker unions affiliated with both federations participated in a February 4 European Day of Action, holding stop-work meetings at the ports and sending delegations to Portuguese embassies and consulates.

The most significant international action was taken at the Port of Algeciras by La Coordinadora, the Spanish dockworkers union. Algeciras is a major transshipment port at the Strait of Gibraltar. It was February when the first ship loaded entirely by scabs in Lisbon—the Samaria, operated by a Maersk subcontractor—reached Algeciras, its first port of call.

While the ship was being loaded, the Lisbon dockworkers had recorded a video to document the fact that the poorly prepared scabs had taken seven days to load the ship—compared with the one day it would typically take the union workers.

The badly loaded ship posed a safety hazard to dockworkers who would handle the cargo at subsequent ports. Cargo that has not been properly secured creates the risk of serious injury or even fatality.

La Coordinadora stopped the ship at Algeciras and issued the captain what the Portuguese dockworkers called a “yellow card.” Citing safety concerns, they warned that they would refuse to unload any ships loaded by scabs in Lisbon.

The ship’s captain communicated this message to Maersk, one of the largest shipping line operators in the world. Maersk sent a letter to the Portuguese stevedoring companies, informing them it didn’t want any of its ships loaded by the Lisbon scabs.

In a meeting mediated by the Portuguese Ministry of Transport and attended by an IDC representative, the employers agreed that the fired dockworkers would be reinstated, the second pool would not be permitted to grow beyond the 21 already employed, and those workers would have the option of being integrated into the union pool after a new collective bargaining agreement was negotiated. The employers’ lawsuit against the union for damages during the strikes was dropped.

The government agreed to help mediate the contract negotiations. Those negotiations were extended until September and then again until the end of the year. They are making slow but steady process towards a contract.

A joint IDC-ETF meeting in March, which had been planned to coordinate solidarity for Lisbon, turned into a celebration and a discussion of other issues facing European dockworkers. There was a strong sense that the Lisbon victory had provided greater momentum to address the needs of other Portuguese dockworkers (particularly in Aveiro), the long-standing dispute at the Port of Piraeus in Greece, and a dispute in Norway.

Katy Fox-Hodess is a doctoral student in sociology at the University of California, Berkeley. She thanks Antonio Mariano and Sergio Sousa of the Sindicato dos Estivadores in Lisbon for their help with this article.

In the video “A guerra dos portos” (War of the Ports, with subtitles in English), dockworker activists from across Europe talk about what this fight has meant to them. Video: Renato Teixeira.