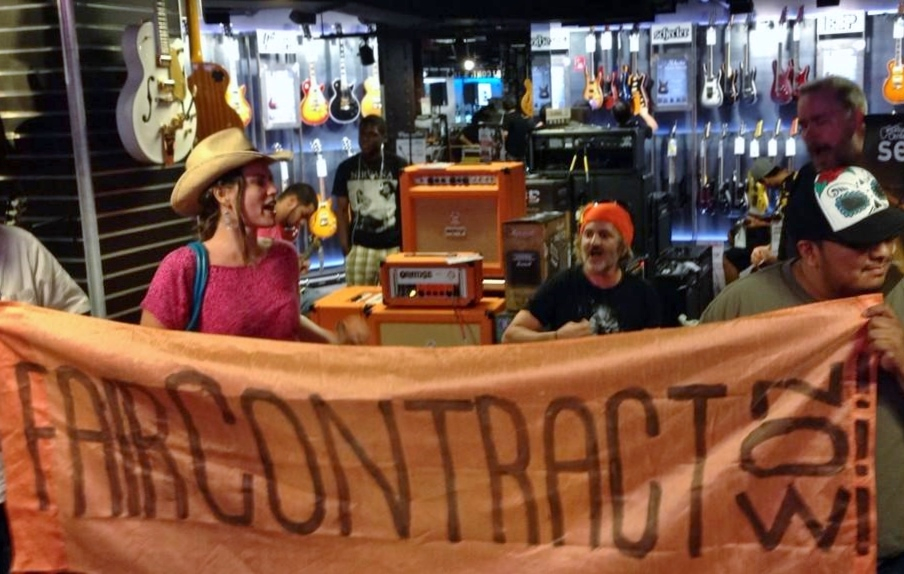 Workers at the retail chain want reform of a pernicious commission system known as "the fade." Supporters in New York took their protest to the new Times Square flagship store. Photo: 99 Pickets.

Guitar Center store workers are fighting for fair wages and improved conditions at stores around the country. The company has responded with a fierce anti-union campaign.

“We love music and our jobs. But many of us barely make more than minimum wage,” said Jeff Loehrke, Guitar Center drum department manager in Chicago.

The Retail Workers Union (RWDSU) won elections at three Guitar Center stores last year, in New York City in May, Chicago in August, and Las Vegas in November. But workers at the three unionized stores are still struggling for a contract.

Over the past year, the union and Guitar Center have had several bargaining sessions in each city. Management is dragging its feet in all three.

In their contract, workers hope to secure a living wage, a fair commission structure, and affordable health benefits. Since Bain Capital bought the company in 2007, commissions have been lowered to the point where, workers say, many make barely over the minimum wage.

The commission system, called the “fade,” requires workers to sell against their hourly wage before they collect commission. The store is also giving workers more non-selling duties on top of this. So you can make a big sale, but then if the commission you’d collect doesn’t surpass your hourly base rate, you don’t collect any commission.

Negotiating a first-ever union contract with the largest music retailer in the world will be no small feat. It’s common for employers to drag their heels on bargaining first contracts, in hopes that workers will get discouraged and give up.

But workers are using a number of tools to put pressure on the company. In both Chicago and Vegas, workers have delivered petitions demanding a fair contract, with signatures from 80 percent of the workforce—showing management that the workers are nowhere close to backing down.

Last month, workers in Las Vegas put up an inflatable rat outside the shopping center where the store is located. The same week, union organizers and community members put up the rat and leafleted customers outside Guitar Center’s new flagship store in Times Square, New York.

The workers have collected 7,000 online petition signatures backing their effort. They’ve also built a support network that includes community groups, other unions, and a Musicians Alliance of 120 supportive bands and musicians, including such popular artists as Tom Morello, Kathleen Hanna, and Roger Waters.

The union filed unfair labor practice charges with the National Labor Relations Board in June, alleging that Guitar Center has made an “effort to delay negotiations” and that it has “announced improvements in the wage practices in all non-union stores around the United States but has refused to consider those changes in three union represented stores, all as a method of punishing the RWDSU represented employees for joining the union.”

The company has made some minor improvements in the hopes of killing the union drive—for example, modest wage increases at the non-unionized stores, while cutting workers’ hours in the union stores.

Although improvements have not been made in the union stores, workers know the changes came thanks to their organizing efforts. They want to codify and expand the gains in a contract.

In the stores, while they press for a contract, workers are continuing to act as a union. They hold meetings, organize actions, and practice their Weingarten rights, which allow them to have a co-worker sit in on disciplinary meetings.

“We will continue fighting, with our fellow workers in New York, Chicago, Las Vegas, and elsewhere,” Loehrke said. “The show must go on.”