Review: In Shop Floor Newsletter, Voice of the Barking Underdog 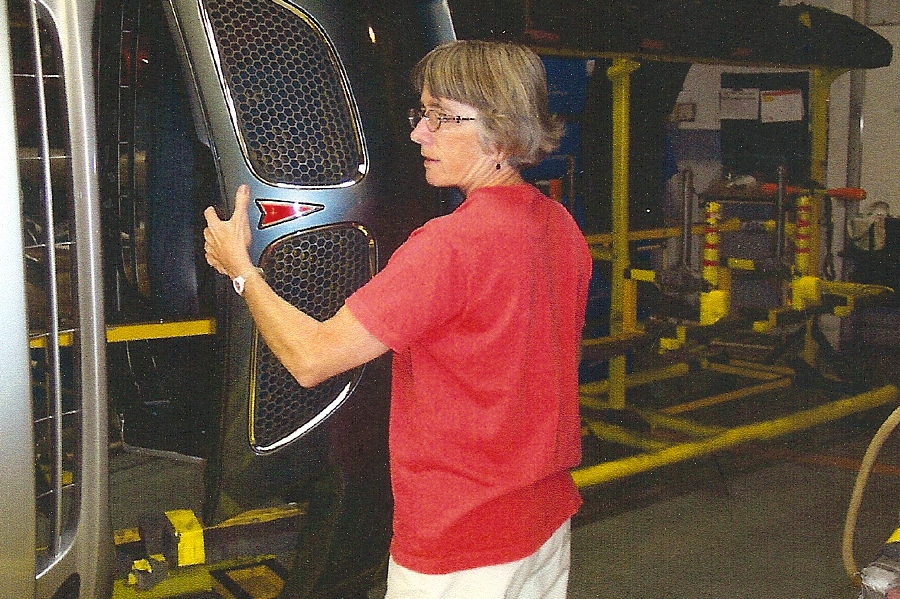 Caroline Lund, editor of the outstanding shop floor newsletter The Barking Dog, at work at the NUMMI auto plant. The newsletter is collected in a new book.

Full disclosure: I asked Caroline Lund’s lifetime partner and comrade, Barry Sheppard, to collect and publish The Barking Dog, because I thought it was one of the best shop floor newsletters from an auto worker I had ever read.

I believed this collection would be an inspiration and a guide for the next generation of rank-and-file auto workers. But I was wrong: The Barking Dog is much more than that.

The Barking Dog is a history lesson: an analysis of the machinations of The Machine That Changed the World, Toyota’s lean production system, from inside the beast itself. Caroline worked at the NUMMI plant, celebrated for bringing Toyota’s methods to U.S. manufacturing. (The system deskills work and chops it up into ever-smaller units, so that workers are interchangeable and easier to speed up or staff down. Labor Notes dubbed it "management-by-stress.")

The book is an exposé of corporate corruption and union capitulation, from the point of view of rank-and-filers. It’s a study of ordinary workers pushed to the breaking point, who decided to push back.

It’s a public record of the resistance and rebellion that grows in the hearts of workers who are often ignored and dismissed by media hacks and union office rats.

Book review: The Barking Dog, a collection of auto plant newsletters by Caroline Lund. To order, write Barry Sheppard at lundshep[at]att[dot]net, $20 in the U.S., $25 elsewhere.

And it’s the journal of a woman with the wit, fortitude, and drive to pursue her vision of what it meant to do the right thing, against all odds.

I was surprised by what The Barking Dog revealed. I didn’t work at NUMMI with Caroline, but we were friends and fellow militants. I didn’t need to reread these old shop floor flyers, I thought—I had lived it.

But as I turned the pages, I realized that the times and struggles I lived were bigger than me, too big for me to absorb all at once. This was Caroline’s special talent.

The Barking Dog is a people’s podium. Caroline was the editor, not a soapbox orator. She stood up for the underdog.

She voiced unpopular but thoughtful opinions, confronted harassment head-on, and didn’t back down when the company or the controlling union caucus tried to shut her down. But she devoted more space to voices of her fellow workers, and to struggles in other workplaces, than she did to herself.

ALL IT TAKES IS GUTS

The Barking Dog includes the voices of rank-and-file workers at Saturn, Caterpillar, Ford, Delphi, GM, and United Airlines; longshore workers; a fired Bart worker in San Francisco; letters from Germany. This list is off the top of my head.

I read letters from women fighting harassment, disabled workers fighting persecution, and of course the voices of workers who feared to give their names but needed to tell their stories and hoped to rally their fellow workers to fight. The Barking Dog was no lone wolf.

Caroline Lund was a socialist of the old religion—like Eugene Debs, who once said, “I would not lead you out if I could; for if you could be led out, you could be led back again. I would have you make up your minds that there is nothing that you cannot do for yourselves.”

Young workers and activists looking for ways to connect and invigorate a new generation of militant workers can use The Barking Dog as a template. It’s simple. All it takes is guts.

Gregg Shotwell is a retired UAW-GM member and author of Autoworkers Under the Gun.