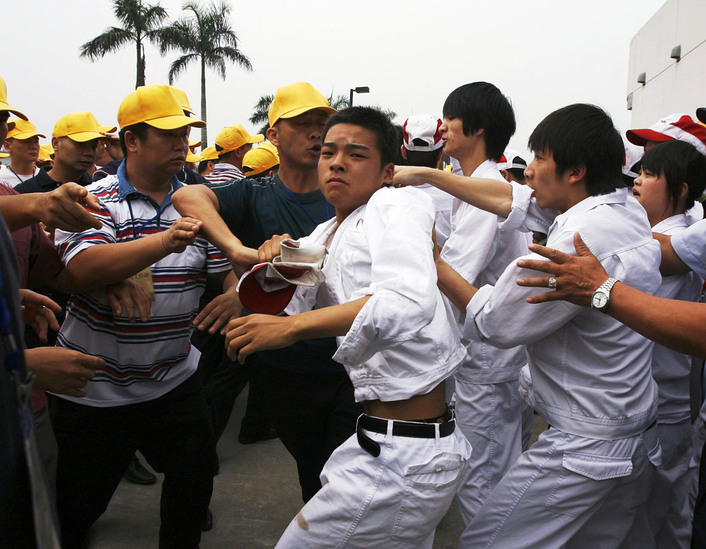 When Honda workers in China went on strike for higher wages, their union sent thugs to convince them to return to work. Eli Friedman's new book Insurgency Trap shows why the rising wave of protests sometimes wins concrete gains, but stops short of forming lasting organizations that could alter the balance of power.

China is the world center of wildcat strikes—given that no strike in China is officially allowed under the law. The government doesn’t issue statistics, but one source found 1,171 strikes and worker protests from June 2011 through 2013.

Strikes are on the rise since 2008, but they all take place outside the official channels of the All-China Federation of Trade Unions. China labor scholar Eli Friedman, who speaks Mandarin and has spent a great deal of time in the country, shows us throughout Insurgency Trap how the ACFTU takes a “passive repressive” response to worker unrest—and sometimes not so passive. His case studies show how in even the supposed best examples—the ones that ACFTU officials show to visiting foreign unionists—workers find their union worthless and contracts go unenforced.

The upshot is that the rising wave of protests sometimes wins concrete gains for particular groups of workers but does not result in lasting organizations that workers could use to fight to alter the balance of power. The ACFTU is the only union allowed.

This is because China’s government fears independent worker organization more than anything—far more than outbursts of worker unrest. A main role of the ACFTU—not to mention the police, as needed—is to block any budding organization that might arise.

Why is the state of Chinese workers important to us in the U.S.? They are the world’s largest working class, in the world’s largest manufacturer and exporter, in the country whose leaders are intent on making the 21st century the Chinese century. They work for American companies, from GM to McDonald’s.

And these days, they are showing more restiveness than the working class of just about any other country. It’s important to us whether this very new working class, an immense potential source of global worker solidarity, can overcome its fragmentation and get organized.

A UNION IN NAME ONLY

The nature of the ACFTU is fairly well known; it’s under the control of the government at the national and city levels, while at the company level, it’s controlled by the employer. Higher-level officials are not elected but appointed. They’re rotated in and out of union jobs and other positions in the state machinery.

Friedman says, “It is not at all unusual for people with no experience in trade unionism whatsoever to be appointed to very high-level positions...leadership is frequently unfamiliar with, and often uninterested in, labor issues...these officials think of themselves as, and behave like, government officials.”

Indeed, the 2001 Trade Union Law says that in the event of a work stoppage, “The trade union shall assist the enterprise or institution in properly dealing with the matter so as to help restore the normal order of production and other work as soon as possible.” (If that sounds like a description of how some U.S. unions react to worker initiatives...well, that’s beyond the scope of this article.)

At the company level, Friedman reports, “it is quite common to have human resource managers or the enterprise owner serve as union chairs.” And if a pro-worker union chair somehow makes it into office, “there are countless examples of activist union chairs being summarily fired for antagonizing management.”

Faced with a union like that, what are workers to do? Over and over again, they organize on their own—at least temporarily.

Friedman details the famous strike wave in the auto sector. It began when about 50 workers from the assembly department of a Honda powertrain factory sat down in front of the plant in May 2010, demanding a big raise of 800 RMB ($50 a month). The strike spread to other departments, and within a week the lack of parts had shut down every Honda facility in China.

At the start of the strike’s second week, the district-level union federation sent vanloads of what appeared to be hired thugs, wearing union insignia, who ordered strikers to return to work. They assaulted some workers. This intervention reinvigorated the strike—but also brought in riot police to cordon off the road to the factory. The local government, Friedman says, wanted neither violent confrontation nor the possibility that the strikers might leave the grounds.

The union chair had been involved in negotiations with management, but essentially took Honda’s side. In order to resolve the strike, local government now actually demanded that the strikers select their own representatives. Bravely, they stated that they would accept nothing less than their original demands without a general meeting of the workers.

In the end, they got wage increases of 500 RMB, and 600 RMB for the second-tier “intern” workers, a hike for the interns of more than 70 percent. Says Friedman, “Such large wage increases in response to strikes were unprecedented.”

That summer, strikes spread throughout the auto industry and spilled into other sectors. At Denso, a major parts supplier for Toyota, 200 workers met in secret to plan their walkout. They blocked trucks from leaving the plant, elected 27 representatives to negotiate, and demanded an 800 RMB raise. They got it. In the northern city of Dalian, 70,000 workers struck at 73 employers in a development zone, winning average increases of 34.5 percent.

Friedman says the dozens of reported strikes are surely a small portion of those that occurred in 2010. The wage increases around the country—sometimes offered by management preemptively—caused media commentators to declare the end of low-wage labor in China. That was premature.

The Honda strikers were perhaps the most daring and “political” of the strikers: one of their demands was for a “reorganized” union, that is, one that represented its members. After the strike, the ACFTU allowed workers to elect their reps—but only at the level of the team, representing about 30 people. At higher levels, management stepped in, and mostly white-collar employees won the elections.

Friedman interviewed Honda workers in July 2010 and found them dismissive of the union, finding no change since the strike: “They just collect the dues each month and that’s it.” “If this company has a union or not, it makes no difference.”

It would seem hopeful that the following winter, the elected representatives participated in wage negotiations at the Honda powertrain plant, and that management granted another 611 RMB raise. Some observers might seize on this as evidence of a real change in power relations. And Friedman notes how much power these workers potentially had, because they were the sole supplier of some parts for Honda in China—and because they’d demonstrated their willingness to act.

But he also points out that their wages are still low, below those of Honda assembly plant workers in China, and that no gains were made on any non-wage issues.

Most important for long-term hopes for worker resistance: workers in the strike wave of 2010 were clearly inspired by each other, but “there was no coordination between strikers from different factories.”

Another case study details two sector-wide agreements in the celebrated province of Zhejiang. Here in the U.S., we’ve seen pattern agreements go by the wayside in almost every industry where they once “took wages out of competition” and increased workers’ bargaining power through unified negotiations and action.

So in the eyeglass industry and the wool industry, the initiation of cross-company collective agreements—which at least on paper bring together workers across workplaces—would seem promising. Friedman says the wool sector agreement “represents the highest aspirations of the ACFTU,” held up many times within China as a shining example.

But when Friedman investigated, he found that it was the wool employers’ association and the eyeglass manufacturers’ association that had initiated the sectoral agreements. Their aim was to standardize piece rates so that skilled workers could not abruptly quit to look elsewhere for better pay. The Rui’an Eyeglass Union was formed after the fact, to create a party for the employers to sign a contract with. In other words, the purpose of the sector-wide agreements was to keep wages down.

Friedman found repeatedly that neither employers nor workers even knew about the collective contract. He describes an awkward meeting with a factory manager. He’d been introduced by Ms. Du, a big booster of the collective agreement, who was both human resources manager at nearby Zhilian Eyeglasses and chair of its union branch. At the neighboring factory, it turned out that the manager had no knowledge that a sectoral contract existed—and told Friedman that his factory worked by hourly rates, not piece rates.

At 10 more eyeglass factories Friedman contacted, hardly any managers had heard of the agreement. Many complained about workers jumping ship to seek higher pay at other eyeglass plants.

Workers were equally unaware of their supposed model agreement. Friedman spent “many evenings hanging out with workers at the pool tables,” and found no eyeglass workers who’d had any experience with a union, much less a collective contract. Most companies had not bothered to set up a union branch in their factories. One group of workers told Friedman that their plant did not use contracts but rather operated on “trust.”

I searched for the silver lining to this picture of worker disorganization and found it easily: Chinese factory workers seem unafraid to take bold action and have learned that it often works. They apparently don’t buy into the government’s official goal of a “harmonious society,” at least in practice.

But they are also well aware of the government’s massive resources and determination to keep them from acting out in a more coordinated way. As Friedman puts it, “different levels of the state are all concerned about worker unrest and are currently searching for various methods of dealing with the problem. However, the key precondition is that workers themselves do not attain any organized and autonomous power.”

Friedman sees it as next to impossible that workers will win better conditions through the ACFTU or through legislation, which goes unenforced. He’s also pessimistic about the legalization of new, real unions. More likely, he says, worker unrest will continue in its current fragmented form, not strong enough to force reforms, and inequality and poverty will persist.

It’s not a pretty picture, and not hopeful for workers in the West, who are constantly told by management that they are competing against “the China price.”

How often, though, have we been trapped by believing that because things are, they will remain that way? Most insurrections have gone unpredicted, from our own labor wars of the 1930s to the Arab Spring, and they have taken place under conditions that observers then found far too unfavorable and repressive.

Click here to read about the latest wildcat strike, by women sanitation workers at a massive university complex in Guangzhou.

Jane Slaughter is a former editor of Labor Notes and co-author of Secrets of a Successful Organizer.
Related
After Workers Flee China's Largest iPhone Factory, Activists Demand Accountability from Apple »
Captured by the Flag »
Silicon Valley Bus Drivers Restored Community Rides for Free—By Taking Matters into Their Own Hands »
VIDEO: Signed, Sealed and Delivered: Film and Discussion of Rank-and-File Militancy at the Post Office »
Review: Dying for an iPhone: Apple, Foxconn, and the Lives of China’s Workers »