Review: Alt-Labor or Not, It Will Take Rank-and-File Power to Revive Us 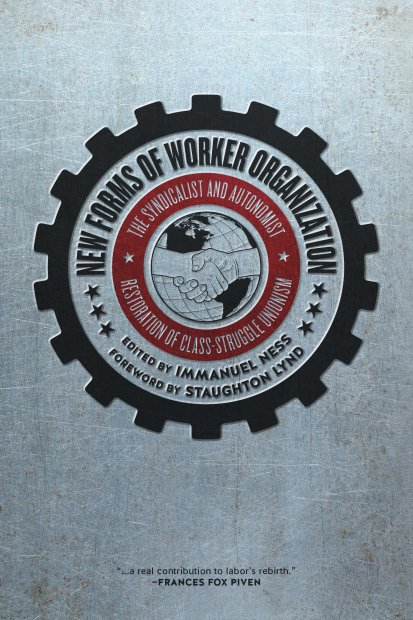 Can recent experiments with alternative forms of organizing, such as worker centers and minority strikes, offer a solution to the labor movement’s long half-century of decline?

Racked by globalization, union-busting, and weak legal protections, unions in the U.S. have fallen from representing 35 percent of the working population in the 1950s to 12 percent today. Other countries have seen similar trends.

An excellent new book, New Forms of Worker Organization: The Syndicalist and Autonomist Restoration of Class-Struggle Unionism, presents examples of present-day organizing around the world—inside and outside of unions.

What these efforts have in common is an approach that editor Immanuel Ness calls “autonomous worker organizing,” which is largely a renewal of an old form of unionism called syndicalism. He promotes it as the best way forward for labor, in the U.S. and globally.

Syndicalism arose in late 19th-century Europe as a more revolutionary alternative to the traditional unions of the time. Its goals were to improve working conditions in the near term, while organizing in the long run to overthrow capitalism.

It’s characterized by a participatory structure, use of direct action in the workplace, embrace of class struggle, rejection of electoral politics, the organizing of general strikes, and advocacy of workers’ control of production. This model rejects any partnership between workers and bosses, and sees the government as on the bosses’ side, not a neutral party.

The new book’s case studies take place in Italy, China, Russia, India, South Africa, Madagascar, Colombia, Argentina, Sweden, Australia, the U.S., and England. Most have a militancy that’s lacking in many traditional union fights. For instance, they use wildcat strikes and occupations. Ness suggests these diverse efforts share some of the core principles of syndicalism, particularly member-initiated direct action in the workplace.

The book’s U.S. example is fascinating: a detailed, firsthand account by a worker who participated in the Industrial Workers of the World fast food organizing campaign at Jimmy John’s in the Twin Cities.

The campaign demonstrates the IWW’s “solidarity unionism” model. Without relying on union staff, workers run their own campaign, developing demands and using direct action tactics to fight for them. Jimmy John’s workers created an organizing committee, listed their demands, stopped work, marched on the boss, picketed and occupied the store, published a campaign website, ran a campaign for paid sick days—and over time, made improvements to wages and working conditions.

They also held a National Labor Relations Board-supervised union election, which they narrowly lost after a union-busting campaign by the boss. This raised questions among workers about the utility of the established procedures for organizing.

In many of the book’s case studies, nonunion workers organized independently because of disinterest or hostility from established unions. In others, though workers were unionized, their unions didn’t offer adequate channels to resolve their workplace grievances, so they had to take their own initiative.

Official unions often did little to help the workers, and sometimes even worked to undermine them. This was true in the chapters about several groups of auto workers—at Honda in China, Ford in Russia, and Suzuki in India. Despite the opposition of the official All-China Federation of Trade Unions, the Honda workers held a successful and high-profile strike for better wages, inspiring actions at many other plants.

When mineworkers in South Africa launched a wave of wildcat strikes and sit-ins, they faced interference from the National Union of Mineworkers on top of severe repression from the government, which killed dozens of workers in the mining town of Marikana.

Workers organizing independently within mainstream unions are covered in chapters on the militant subway workers caucus within the transportation union in Argentina and on workplace takeovers in the construction, garment, and mining industries in Australia. Workers took over the construction site at the famous Sydney Opera House and ran it for over a month—with greater productivity. They won higher pay and shorter hours.

Two chapters discuss autonomous workers’ movements or organizations that cross industries within a country: the Confederazione dei Comitati di Base (Cobas) in Italy and the SAC syndicalist federation in Sweden.

This book provides a great overview of the non-traditional part of the global labor movement, which needs more attention. A common thread: workers are building power in ways that rely on worker initiative and solidarity, not on formal legal certification or union contracts.

It raises crucial questions about the role of rank-and-file power in a union revival, and offers a challenge to traditional union practices.

To solve the labor movement’s problems, first you have to understand their origins. In the U.S., mainstream unionists tend to believe the era after the 1935 enactment of the National Labor Relations Act (NLRA) was a golden age for organizing.

That law is seen as a progressive breakthrough that protected workers’ rights to organize and bargain collectively. In this version of the story, our current troubles are the result of a renewed corporate anti-union offensive begun in the ’70s and ’80s, coupled with a lack of enforcement of labor rights.

If that’s true, then the solution is reformed labor law and better enforcement. But Ness ends the book with a compelling essay that critiques this traditional understanding.

He sees the NLRA as a loss for the labor movement. It created a bureaucratized industrial relations system that stifled workers’ initiative and militancy on the shop floor. Unions traded away their disruptive rank-and-file power for an NLRA that shackled unions as contract administrators and eventually enabled their decline.

Ness shares the syndicalist view that disrupting production is what makes employers yield. Empowered workers should be free to stop work at any time, not hindered by the no-strike clauses and multi-step grievance procedures contained in most union contracts. Without this kind of militancy, he believes, there’s little chance of a revived labor movement.

If Ness is correct, the initiatives the U.S. labor movement has developed over the last few decades—more resources for new organizing, better corporate campaigns, increased turnout for elections—will not be enough. Instead, to make room for the widespread, combative workplace activism we need, unions will have to rethink our attitude toward rank-and-file power.

Of course this is risky. Strikes are often hard to win. Workers can usually be fired easily, no matter how organizing is done or who does it. But the resurgence of a participatory, syndicalist approach to organizing could provide a much-needed spark for labor.

Eric Dirnbach is a union staffer and labor activist in New York City.

Related
Los Deliveristas Speak: How Delivery Workers Are Organizing to Take On the Apps »
Captured by the Flag »
Can a Driver Uprising Make Food Apps Deliver? »
Steward's Corner: Outwitting Management’s Anti-Union Games »
Inside the Alabama Amazon Union Drive: An Interview with the Lead Organizer »

I completely agree that mainstream, government-sanctioned unions cannot defend us from the bosses and the government they dominate. We're long past the point when the post-WWII labor movement is effective. It doesn't matter to me if we re-organize as Wobblies, syndicalists, non-profits or labor-community centers, so long as we do it outside of federal supervision.