Life on the Fifth Tier inside Ford's Rouge Complex 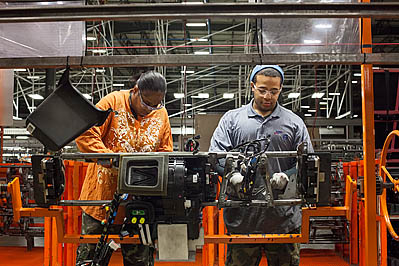 These union fourth-tier auto workers who make dashboards for Ford at cut-rate wages are lucky compared to the fifth-tier workers who work for fly-by-night companies and have no job security. Photo: Jim West/jimwestphoto.com.

A fifth-tier auto worker I interviewed recently was making $9.30 an hour, in a union plant. Or rather, plants: he’s on call to go wherever the PIC Group, a third-party quality inspection company, sends him, working anywhere from a few hours a week to 10-hour days, seven days a week.

When the Big 3 auto makers invented a second tier inside their plants, in 2007, it got a lot of attention. The United Auto Workers agreed to throw out the window “equal pay for equal work” for workers within the same company; it set the stage for lots more two-tier arrangements everywhere. But the bottom-of-the-heap fifth-tier auto workers are pretty much invisible.

Their jobs are a far cry from first-tier auto work, where employees have a set schedule and make $28.12 an hour, with health care and a pension (never mind they’ve had no raise since 2005). They’re also way worse off than the second tier at the Big 3, who do the same jobs inside the plant as the first tier but start at $15.78, topping out just $3.50 higher.

The third tier is what Ford calls “Long-Term Supplementals,” temps who are Ford employees and can work for up to a year, doing the same jobs as the first and second tiers. Fourth tier would be workers for other companies, doing jobs that used to belong to Ford workers, such as driving and cleaning.

And the fifth-tier workers are the most temporary of the temporary, employed by fly-by-night subcontractors.

The scandalous thing, for anyone who’s been around longer than a minute, is that all the work the lower-tier people do was performed by first-tier workers in the not-so-old days. These were actually the desirable jobs—not so physical, or off the assembly line—that you needed a lot of seniority to get: Janitorial. Inspection.

The fifth-tier workers, when they’re called in, work cheek by jowl with their higher-paid peers. They’re living reminders of what could befall today’s union members if they should step out of line and tumble down the tiers.

Detroit-area native Brad Duncan was glad to get any job at all when he worked for the subcontractor ASAP in the height of the recession. Here he tells about working inside Ford’s mammoth Rouge complex in Dearborn, Michigan.

I was an “independent contractor” but the way it really worked was on a day labor set-up. ASAP, the company I worked for, did work for small non-union plants in the suburbs and also at Dearborn Truck. I worked at both. At the Rouge I worked night shift and day shift, 11-hour shifts. The line would start at 5:30 a.m. and go to 4:45 p.m., and vice versa.

As an independent contractor there was no overtime pay, so I worked 60 hours a week for 600 bucks.

When the frame for the truck gets put on the line there are lots of problems with it: burrs from bad welding or the holes aren’t right. I had to run around the F-150 frame and poke a marker through the hole to make sure the punches had gone through, and then feel for burrs. I had a chisel and a mallet to remove the burrs before the axle was put on.

What I did was technically inspection and quality control. But I had to fix it if it wasn’t quality. I wasn’t just inspecting for burrs, I was chiseling them off.

Some of the jobs could be classified as counting parts or testing parts, but they were all inspecting plus something else physical. I don’t see a dividing line of something a subcontractor wouldn’t do. Once they have a fake company and cheap people, they can have you do any of the peripheral stuff.

When Ford outsourced assembly of Mustang rear ends to a contractor, workers hired to do the work thought their jobs were secure. These fourth-tier workers, whose plant is right across the road from the Flat Rock, Michigan, Assembly Plant (FRAP), were told that if Ford ever brought the jobs back in-house, they could follow the work and become Ford workers.

But now Ford is doing just that, and all 220 workers (except supervisors) at Logistics Services Inc. are losing their jobs. Though they have at least seven years’ seniority at LSI, they will be replaced with Ford workers who were hired last year and who otherwise were about to be laid off.

But FRAP and LSI workers both said the motivation to ice out the LSI workers was all on the part of FRAP’s union chairman, Tony Bondy. They said Bondy had gotten a dozen friends and relatives in at FRAP with the last wave of hiring. This way, they’ll keep their jobs while the LSI workers scramble.

Aaron Taylor, a shop floor union rep at LSI, pointed out that the LSI and FRAP workers all belong to the same local, United Auto Workers 3000. He wrote on Facebook that Bondy was “screwing his brothers and sisters, because we’re all the same union. I got into it with a girl—and found out it was his daughter.”

Bondy did not return calls. UAW 3000 President Steve Gonzales, who represents workers in both plants, said he had no idea how the arrangement happened. Bondy was voted out of office this spring, 2-1.

Asked what LSI workers were saying, another union rep responded, “I’m not going to cuss but they’re pretty mad.” The LSI workers are now being laid off as they train their replacements.

It was a fake company without auto experience hiring people who don’t care.

Everyone was an independent contractor. ASAP was my company, but it was named something different before I worked there—they changed the name of the company basically to avoid a former employee conflict. It’s a company that was thrown together to make use of these subcontractor loopholes. The folks that were hired to be supervisors generally didn’t have a background in auto. There are no offices.

Nominally, we were hired by Magna, a Canadian company that supplied frames to Ford, because they’d had problems and needed reps in-house to check after their product. So we were quality control inspectors for Magna.

Then later we were checking for a different company. On that job, there’s this cheesy extra plastic trim around the wheel well to make it look good. So I was checking for problems because of bad molds. When delivery brought boxes to the line, we would check them by feeling the ridges, then examine them again after they were on the truck. I had a clipboard, I noted which truck it was, so someone else would go and change it later.

The Ford workers knew there were third-party contractors in the plant, but not the specifics, how many or where. Sometimes I fielded questions.

The older workers looked at you like “I wish I could do that.” But if you asked them if they wanted to switch jobs, they’d say, “No, you’re getting paid $10 an hour.” It was viewed as the ultimate shit job—but also we got off easy—but no one would want to be in our shoes.

In the back of the plant, there was a much younger workforce. They were less suspicious around us. Once they invited me to a strip club.

But on Trim, where the truck is almost finished, people had similar jobs to mine, like making sure the safety belt was there and the paperwork was there. They could see that what I was doing was very similar to their jobs.

A few people from the union asked me, who are you guys, what are you doing? But the boss told us not to talk to anyone UAW about anything UAW.

Take This Job and Shove It

I was taken off nights because I had a huge conflict with the foreman in charge of contractors. I told him to put me on days or I was out of there. Even when I got in my foreman’s face and threatened to leave, they wouldn’t fire me, because I was one of the very few people who kept showing up for work.

They couldn’t get people to stay there, even with 28 percent unemployment. The turnover was insane. I had different co-workers every week.

A funny story: The back of the plant backs onto a big parking lot, and on their breaks people would pee in the bushes there.

When I was switched to days, in the front of the plant, I noticed some folks would pee in the bushes outside there, too, but decidedly fewer. I figured because I had seen some folks do it that maybe I could, too. Well, the front of the factory during daylight hours is a whole other story. There were these public tours of the Rouge, guided tours, you’d see management giving executives tours all the time.

My company had four managers and four workers. Four managers to liaison with Ford and watch over us. The boss comes running like he was shot from a cannon: “Which one of you peed in the bushes?”

He said there was a tour going by, senior management happened to be on the tour with them, and it was caught on video. “This company is being ejected from the Ford Rouge plant,” the boss is yelling, “get out of here right now, they’ve called security, they’re coming for you.”

I grabbed my lunch pail and bolted for the door. We wore yellow safety vests—that means either subcontractor or management. As I was pulling off the vest as I ran out the front door, the boss texts me to ask my address. I figured they wanted it so they could send me a final check—but then they never sent it to me. They didn’t even have my address and the spelling of my last name and I had worked with them for at least 10 months.

Who knows whether my company stayed fired, or was rehired, or whether they dissolved and made a new company?

Order a “No More Tiers” t-shirt from a second-tier GM worker here.