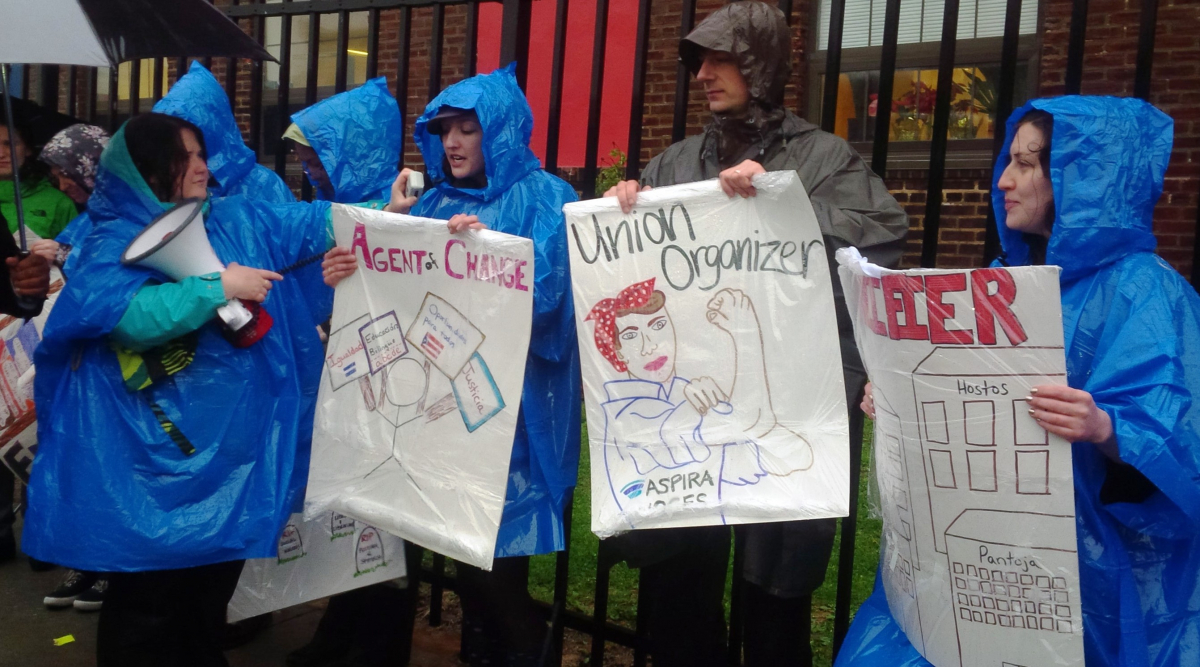 Aspira charter teachers braved rainstorms Wednesday to argue that workplace democracy is part of the mission of the organization that founded the charter chain.

Charter school teachers in Philadelphia are speaking out against their employer taking over another school while ignoring teachers at existing schools.

Instead of supporting management’s expansion plans, they’re making common cause with parents at the targeted school, Luis Muñoz-Marín Elementary. The teachers want to unionize in the charter teacher local of the AFT.

Aspira charter chain teachers rallied in the pouring rain at the company’s Philadelphia headquarters on Wednesday. For over a year they have been clashing with the chain, seeking union recognition and a role in school decisions.

“I just feel like they are not in a position to grow,” said Hanako Franz, a teacher at Aspira’s Olney High School. The teachers have been phone banking Marín parents to discuss concerns that Aspira schools leave parents and teachers out of decisions.

Teachers have filed four unfair labor practices against Aspira, including one against the chain for barring teachers from criticizing their school online. Aspira got rid of that policy as a result of the charge.

Teachers are asking management not to interfere with the union drive and for union recognition if a majority sign up. This is similar to what teachers at charter chain UNO won in Chicago last year.

In response to the protests, the Reform Commission offered parents a vote: let Aspira run your school and get added funding from the district, or get no extra funding for what the Commission calls an “underperforming" school.

“It’s a false choice, especially when budgets are so crunched,” Franz said.

After parent opposition increased, the Commission informed parents their vote would only be advisory, and then put off balloting until June. Activists expect Aspira to use the extra time to wear down parents and get them to accept the takeover.

“We have so many parents are so upset about this,” said Maria Cruz, a Marín parent and president of the local school advisory council. She said she’s worried the charter won’t work with Marín’s special needs students, since charter schools often don’t.

She’s also concerned about the effect on students when teachers are replaced. (If the charter takes over, all teachers must reapply for their positions.) And she said Aspira makes parents pay extra fees for uniforms and other materials.

Teachers denounced the chain for leaving them out of decisions. “Having things run by people who aren’t teachers or parents is not going well,” teacher Sarah Apt said. Apt joined Aspira three years ago, excited to teach at a school that had an emphasis on bilingual education. But it’s not clear who’s making policy at Aspira schools, she said, and they are not listening to feedback from teachers. “Our students get constantly moved around” she said, describing disruptive changes each year in how students are divided up and how class time is structured.

The advisory vote is June 5. Cruz and other parents who are opposed to the takeover want to vote sooner to send a message to the school district. Meanwhile, they are petitioning to oppose the takeover.