Review: The Right to Stay Home 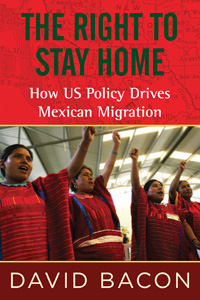 The Right to Stay Home: How US Policy Drives Mexican Migration, by David Bacon. Random House, 2013.

While immigrants were fasting on the Mall near the U.S. Capitol last month to pressure for immigration reform, the Mexican Congress was allowing privatization of the country’s public oil corporation, PEMEX.

Separated by 2,500 miles, these events might seem a world apart.

But David Bacon’s The Right to Stay Home: How US Policy Drives Mexican Migration shows how the two are intertwined. Bacon weaves narratives across borders, following communities as they struggle at home, migrate, and then struggle again in their new homes.

Over half the Mexican population lives in poverty, according to the World Bank. And Mexico is the only country in Latin America that saw poverty increase last year.

In 1994 Mexico formally scrapped its decades-old program of economic development based on industrial and agricultural self-sufficiency. The government turned instead to a policy based on open markets and foreign investment: NAFTA.

Shortly after the NAFTA ink dried, the U.S. fell into a recession and the poverty rate in Mexico quickly grew to over 60 percent of the population. Ross Perot’s sucking sound of jobs rushing south across the border was drowned out by the noise of U.S. capital vacuuming up cheap labor.

Got You Coming and Going

Undocumented immigrants were shipped in partly to break a union campaign. When they said “enough is enough” and joined the union drive, Smithfield colluded with ICE to terrorize the workforce. Ultimately, the union drive won, but at tremendous cost: firings, fear, deportations, resentment among the different communities.

The union organizing in Tar Heel mirrored a community effort in Veracruz to limit the growth of the Smithfield subsidiary—in particular because of its toxic waste that destroyed the water table, causing kidney infections and forcing communities to depend on bottled water. The community won an agreement that the company would not expand further.

In another example, further south in Oaxaca, mining corporations gobbled up farmers’ land—also using NAFTA provisions—and poisoned the environment with toxic wastes. They provided a few jobs at above-average wages, but dried up many more.

This transformation of Mexican lives did not stop with NAFTA. It’s still in progress, and will be worsened if the proposed Trans-Pacific Partnership is signed.

The Mexican government has used the military to break two of the country’s strongest unions: the copper miners at Cananea and the union at the electrical utility in Mexico City, both leaders in the fight against deregulation and privatization. The electrical workers, in particular, held off the privatization of PEMEX for about a decade.

The government is now pushing labor law changes that would eliminate the 40-hour week, create at-will employment, and limit the penalty for unjust termination to one year’s severance pay, regardless of seniority.

With militant unions out of the way, the government can proceed with selling off PEMEX—the crown jewel in the nation’s mythology of self-determination.

Before NAFTA, weak institutions and corrupt party bosses in Mexico produced poverty, economic disparity, and economic instability. But since NAFTA, weak institutions and oligarchic corruption have produced a culture of impunity. Corporate, government¸ and corrupt union officials are seemingly uninterested in social development but intent on eroding the few protections workers still enjoy.

The same social forces that prevent economic development in Mexico intensify the pressures that force immigrants to make the trek north.

Bacon deftly weaves a narrative based on interviews with labor activists from the same community in Mexico, some now residing on each side of the border. Each chapter shows the compelling personal stories behind the larger social forces.

We meet H2-A guestworkers fighting for a union in the tobacco fields of North Carolina, illegally evicted from their homes in California, forced out of their workplaces at gunpoint, and many more. We also meet union members struggling in farms and factories on both sides of the border.

Some of those activists come from Oaxaca, a state where more than 40 percent of the population lives on dirt floors. There Bacon met indigenous activists who rallied for “the right not to migrate.”

So Bacon threads this concept throughout his book, challenging us to take on workers’ struggle to survive in Mexico as a necessary element of immigration reform. He calls on us to follow the example of these activists and build a transnational movement based on the right to stay home—so that migration can be voluntary, instead of forced by economic displacement and abuse.