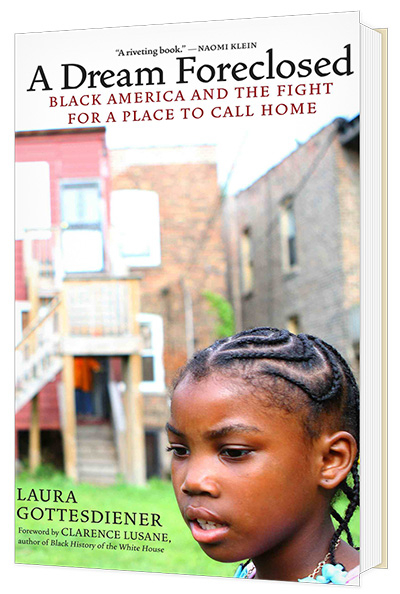 A Dream Foreclosed: Black America and the Fight for a Place to Call Home, by Laura Gottesdiener. Zuccotti Park Press, 2013, 208 pages.

In his foreword to A Dream Foreclosed, Clarence Lusane reminds us of the past struggles of black people in America for fair housing. Dr. Martin Luther King, Jr. was key in organizing for the Fair Housing Bill of 1968, and was instrumental in President Lyndon B. Johnson’s signing the bill into law on April 11, 1968—sadly, seven days after King’s assassination.

Dr. King would be appalled that today thousands of people are affected by the banks’ mortgage and foreclosure crisis. Many major cities have been destroyed by foreclosures. The vacant homes leave neighborhoods looking like they were in a war zone.

King would be protesting the corruption, focusing on the fair housing violations, and talking about the disproportionate number of African Americans and minorities who fell prey to predatory and fraudulent mortgage practices. He would be revisiting the Fair Housing bill and how middle class Americans were targeted and attacked by greedy bankers.

Laura Gottesdiener presents in A Dream Foreclosed an overwhelming amount of historical data about the foreclosure crisis. But she focuses on four families and their struggles, giving an inside view of each family’s challenges with banks and bank servicing agents. She captures their moments of fear, faith, stress, fight, and redemption, making a genuine connection to the people and their stories.

Many of the families obtained support from housing groups such as the Chicago Anti-Eviction Campaign, Detroit Eviction Defense, and the Occupy movement.

William and Bertha Garrett of Detroit searched until they found the perfect home for their family, where many memories—graduations, holidays, and weddings—would be created. But Bertha received a call from a home loan salesperson offering a refinance loan.

She would regret taking that loan, because it almost got her evicted.

Many groups and actions to stop such evictions have popped up around the country. Many are protesting and using acts of civil disobedience to fight the banks that were bailed out by the federal government.

Ms. Garrett found courage and support from Detroit Eviction Defense, Occupy Detroit, and Moratorium Now. She confronted the Bank of New York Mellon in its lobby, where she lay on the floor in protest.

The bank finally agreed to sell Ms. Garrett her house for the auction price of $12,000. This stormy journey was a real tear-jerker, but the struggle was necessary to fight and bring attention to predatory lending.

Another victim of predatory lending was Gary Wimberly of Sanford, North Carolina. In the late 1990s he and his wife earned decent middle-class salaries and dreamed of building a new home. So Gary built his house in nine months with his own hands. He also had a vision to build homes on 100 acres of land. All of their dreams were coming true.

While finishing his house, Wimberly was approached by a salesman to get a home loan.

What seemed like a good idea suddenly became a nightmare. He found himself caught in a predatory lending scam and his house at risk for foreclosure. His dream was unraveling at the hands of the banks. Dozens of fees and robo-signing were part of this evil scheme.

Wimberly was not ready for the determination the bank would show to get his home. He would fight eviction tooth and nail, and it would be a long battle to victory.

Public Housing ‘Not for Sale!’

Some of the book’s stories deal with public housing. For instance, Michael Hutchins of Chattanooga, Tennessee, survived a near-fatal accident. A speeding car suddenly jumped the curb and struck him, leaving him helpless for months. During this period, Michael thought of nothing but having a place of his own.

Hutchins’s mom applied to the city’s public housing agency for a place to live. He made an apartment his home. It wasn’t the best, but he enjoyed the people, and everything in his place worked.

No one speaks of the closeness of the neighbors and the feeling of safety that they got from living there—only about tearing it down after the city didn’t maintain the property. Many public housing complexes are under threat of being demolished and their tenants displaced. The Chattanooga mayor was trying to move hundreds of tenants.

As part of a campaign to save public housing called “The Westside is not for sale!”, Hutchins spoke to the city council about how great the need is for low-income housing. After getting news media attention, the Chattanooga Housing Authority was successful at defeating the demolition of College Hill Court.

Martha Biggs, a struggling single parent, and her young daughter Jajuanna Walker lived in Chicago’s public housing community of Cabrini Green. The 1970s television show “Good Times,” although it was a comedy, depicted the lack of space and hardships of life for a poor black family there.

A two-bedroom unit would be home for Biggs, Jajuanna, and her two other children, but Biggs found herself homeless after her building was foreclosed. There were times when the family had to split up to survive.

Biggs coined the term “home liberation”—taking back homes that are sitting vacant in our communities. She partnered with the Chicago Anti-Eviction Campaign to reclaim the first vacant home.

A Dream Foreclosed focuses on people who feel housing is a human right and will fight for that cause. Through their many ups and downs with the banks and mortgage lenders, the thread that binds them is the greed and corruption of the banks, whose predatory lending and fraudulent practices threatened and caused foreclosure on thousands of homeowners across America.

Our banks want to have a place in the neighborhoods that they have destroyed, but they must be made accountable for their negative impact on the community. The National Mortgage Settlement tried to remedy some of the greed, but came about far too late for many people.

The four families featured in this book found the courage to fight and became activists seeking fair housing for everyone. They fought the corrupt banks and mortgage system and won. That kind of courage is what’s fueling anti-eviction movements across the country.

Jerome Q. Cullors is active in Detroit Eviction Defense and a retired Teamster.

Related
Communications Workers Fight Telecom Giant for MLK Day Off »
Housing Is a Worker Issue: Why the Labor Movement Should Support the 'Beyond Recovery' Campaign »
Racial Disparities in COVID-19 Point to Need for Medicare for All »
The Coronavirus Crisis Exposes How Fragile Capitalism Already Was »
Twin Cities Janitors and Guards Feature Climate and Housing in Their Strike Demands »