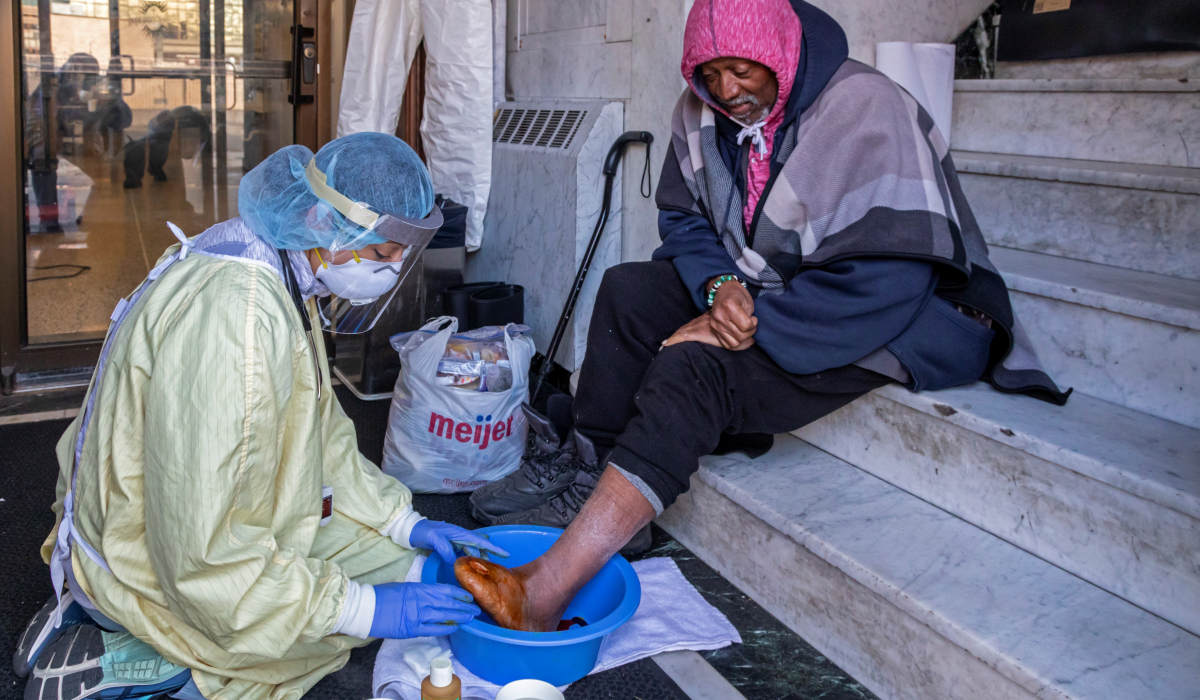 At a Detroit homeless shelter, a man is treated for complications of diabetes. Photo: Jim West, jimwestphoto.com, cropped from original.

The racial disparities of COVID-19 have received much attention. Blacks are dying at a higher rate that is typically more than double the rate of whites. But we need to move beyond naming the problem to fighting for solutions. Medicare for All would go a long way to beginning to address racial disparities in health care in general and for COVID-19 in particular.

The obvious and immediate need of black and other working class populations caught in the teeth of the pandemic is the right to health care treatment without the burden of cost. Even before the pandemic, lower-income, Latino, and younger workers were more likely to be uninsured. Undocumented workers had the highest rates of uninsurance.

The pronounced differences in COVID-19 mortality are not driven by a lack of health care per se but a reflection of how the virus compounds health problems created by inequality.

Two recent studies show that more pollution and other factors like poverty, crowded housing, racialized economic segregation, and relative income extremes are associated with higher mortality rates from the coronavirus. These patterns do not reflect mysteries of human biology but the brutal truth about health under capitalism—that class position predicts health outcomes and that racism and other forms of discrimination and disadvantage place additional burdens on health.

These patterns undergird and explain both the greater risks of exposure to the virus in the first place and why populations with preexisting conditions are more likely to become gravely ill or die from COVID-19. It is no surprise that both the impact of the disease and people's concern about it differ according to income, race, and ethnicity.

WHAT EXTENDING MEDICARE WOULD DO

Thirty-nine million former workers have filed for unemployment benefits. This loss is bad enough without the additional worry of paying for medical treatment during a pandemic. To protect individuals and advance public health, Medicare should provide coverage for all medical costs during the pandemic.

An improved Medicare for All is the best policy, but even an extension of Medicare would be a better option than what is presently available. Medicaid enrollment will increase under the pandemic, but many will still be left behind, as not all states expanded eligibility for Medicaid under the Affordable Care Act. Individuals and families will turn to private plans offered under the Affordable Care Act, which are subsidized for those with incomes between 100 and 400 percent of the Federal Poverty Line, but these plans, by design, differ in quality (they are euphemistically categorized “gold,” “silver,” and “bronze”).

Laid-off workers might continue their insurance coverage under COBRA, but this program does not cover all jobs and it requires former employees to pay for the full cost of their insurance premiums. Depending on the circumstances COBRA is available between 18 months and 36 months.

Local, state, and federal governments are already paying for health care through a variety of ways: Medicare, Medicaid, individuals' debt and bankruptcy filings, indigent care at the local level, and even subsidies for COBRA. We could simplify this process, ensure that nobody goes bankrupt, and alleviate the burdens on municipal and state governments all at once by adopting Medicare for All.

This would not eradicate racial bias and other sources of health disparities. There is bias in the clinical setting,

We know that the longer-term remedies to class, racial, ethnic, and indigenous health disparities require much bigger changes: expanding collective bargaining and workplace democracy and enacting universal programs that benefit everyone: improved Medicare for All, affordable housing, full employment, and robust anti-discrimination law and public policy.

In the short term, expanding Medicare now is essential. It would make a big step towards advancing health equity in the United States. Jayapal and Sanders have a plan. Let’s get behind this or something like it. Now.

Dean E. Robinson is an Associate Professor of Political Science at the University of Massachusetts, at Amherst. His teaching and research focuses on racial and class inequalities in health In the United States. His research includes a project with Springfield, Massachusetts’s Men of Color Health Awareness (MOCHA) that examines the impact of poverty and job loss on stress and black men’s health. He sits on the board of his local (Massachusetts Society of Professors), state (Massachusetts Teachers Association), and national union (National Education Association).