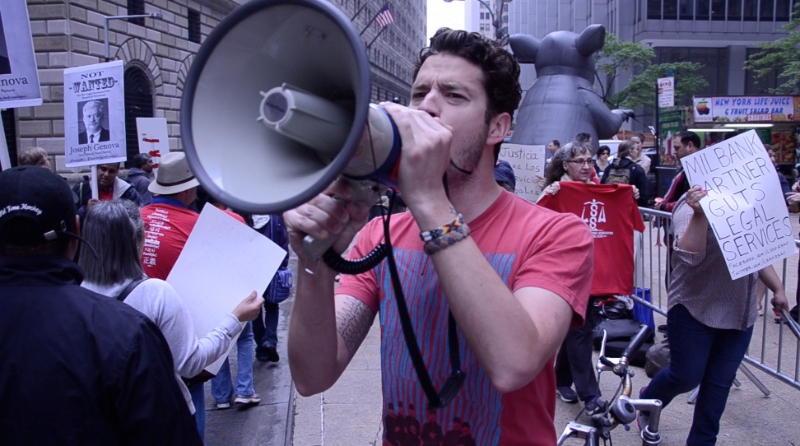 Attorneys and other professionals who are defend tenants, domestic violence survivors, and people with disabilities in New York are entering their sixth week on strike. Drastic benefits cuts would turn their job into a revolving door, they say, eroding the quality of legal advocacy available to low-income people. Photo: Jim Provost.

UPDATE, June 24: Legal Services NYC staffers announced they have approved a contract, ending their 40-day strike. The deal thwarts management's efforts at drastic benefits cuts, the union said: retirement and salary scales will stay as-is. Union members and managers alike will pay 1 percent of their salaries towards health care premiums. And new terms on equity in the event of layoffs are meant to ensure the burden doesn't fall solely on union members (in an already top-heavy organization).

Through the windows of his office tower a few blocks from Wall Street, Joseph Genova can surely see them: a 10-foot-tall inflated rat, placards bearing his face, and picketers chanting upward in unison.

But 217 attorneys, paralegals, and other professionals are now entering their sixth week on strike. They are members of the Legal Services Staff Association (United Auto Workers Local 2320, National Organization of Legal Services Workers).

“Our low-income clients deserve quality legal services and we deserve a fair contract,” said Tyler Somes, a paralegal in the Staten Island office. “We’re fighting to prevent millionaire members of the board of directors from undermining this organization and its commitment to this city’s most vulnerable populations.”

The nonprofit Legal Services NYC is the nation’s largest provider of low-income civil legal services. It serves more than 40,000 people every year.

Led by multimillionaire Genova, partner at a high-end law firm, LSNYC’s demands for deep cuts to employees’ health care and retirement benefits forced workers out on strike in mid-May.

Walls of glass and steel separate Genova from the protesters, but a short ferry ride away, Mohammad Hassan views the strike through a more personal lens.

Hassan, an immigrant from Egypt, a taxi driver, and a former small business owner thwarted by the financial crisis, struggled to keep his Staten Island home with the help of advocates from LSNYC.

“Without the skilled secretaries, paralegals, and attorneys who helped my family through the court system, I likely would not be sitting in this home right now,” he said. “I know they don’t make high salaries, but they should not be forced into cuts to health care and retirement benefits that will prevent them from continuing their work.”

For Hassan and other low-income New Yorkers who cannot afford attorneys, LSNYC, essentially a citywide collection of community-based organizations, represents a last line of defense.

Salaries at LSNYC are modest for the industry. An attorney with five years’ experience earns less than $72,000—compared with $230,000 at Genova’s firm, Milbank Tweed.

Attorneys and lower-paid staff have relied on sustainable health care and retirement benefits to forge a career at LSYNC. But now LSNYC, with Genova at the helm, has proposed to slash these benefits.

If that happens, strikers worry, it will be difficult to make a long-term career of working for the poor. LSNYC could become a revolving door, at the expense of low-income people who desperately need experienced advocates.

“By demanding cuts to benefits, especially at a time when they can’t substantiate a need [for the cuts], they are telling these communities ‘you don’t deserve an attorney with experience, because we’re not going to maintain a system that allows advocates to forge a career,’” said Maura McHugh Mills, a senior attorney with eight years of experience in the Bronx office.

Genova, a multimillionaire with a condo on the Brooklyn waterfront and a home in the Hamptons, is trying his scheme on the backs of New York City’s most vulnerable.

Cuts without a Cause

The approach is as unnecessary as it is common in these days of so-called austerity and budget sequesters.

Meanwhile, LSNYC recently confirmed it will receive more federal funding than it had forecast through 2015—and expects to end the year with millions of dollars in surplus. (Both sides propose that the union contract would run through June 2014.)

Nonetheless, striking employees have offered concessions, including an unprecedented contribution to health care premiums and reductions in coverage, to substantially address the same cost savings Genova and LSNYC have sought.

The union also points out that LSNYC employs one high-salary manager for every three case-handling advocates—compared with a one-to-five ratio at the Legal Aid Society, a nonprofit that provides similar services. Management has refused to consider changes to this wasteful top-heaviness.

Genova has not shied away from hardball.

As soon as the strike started, LSNYC terminated health benefits without notice to employees—who only learned of the move weeks later when their doctors denied care.

Employees eventually received COBRA notice letters and the UAW ultimately stepped in to ensure continuing coverage, but the administrative delay due to lack of notice resulted in more than one emergency room visit. Families who could not fill prescriptions or take their children to the doctor felt immediate effects.

LSNYC had never before terminated health benefits during a labor dispute. The move came as a shock to workers and supporters—especially since, in its first five years of existence, LSNYC fought and won the landmark 1970 case Goldberg v. Kelly, which secured due process rights to employees for “timely and adequate notice detailing the reasons for a proposed termination” of benefits.

Forty-three years later, with Genova at the helm, the irony is apparent.

The clients who rely on LSNYC do not have an official seat at the bargaining table—but even on strike, union members are fighting on their behalf by defending the organization’s future.

Ian Davie is a senior attorney in the Bronx office of Legal Services NYC, representing low-income families, individuals, and the elderly on housing issues.