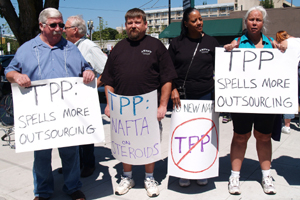 As a Democrat running for re-election, President Barack Obama might assume he has organized labor in his pocket, but one West Coast union staged a public protest when the president made a campaign stop in Portland, Oregon.

“When the president ran for office, he said to challenge him during the term of his office. That’s what we were doing,” said AWPPW Vice President Greg Pallesen. “It’s clear these trade policies have failed the American people.”

OUTSOURCED AND OUT OF LUCK

The paper mill workers are concerned about the Trans-Pacific Partnership, a massive NAFTA-style agreement now being drafted in secret by lobbyists and corporate representatives. It would include the United States, at least eight Pacific Rim countries, and potentially Mexico, Japan, and Canada.

According to Citizens Trade Campaign, the TPP would become the largest free trade agreement in the world. Such deals have typically promoted the interests of international investors and protected corporations from any government regulation that might interfere with profits—encouraging companies to invest where labor is cheapest and environmental regulation is lax.

Dave King, a Portland labor and climate change activist, attended the picket. Hardly anyone knows what TPP is, said King, who started up conversations with people standing in line for the fundraiser on the impacts of U.S. trade policies. “Some of them listened,” he said.

Pallesen said U.S. paper-industry workers are already hit hard by capital’s flight around the globe, as companies like International Paper, Georgia Pacific, and Weyerhauser close mill after mill, shipping the machinery abroad, most often to China. At the same time, he said, these companies receive billions of dollars in federal and state tax credits they claim are needed to keep their U.S. operations afloat. “It’s a scam job, taking our hard-earned tax dollars, grabbing that money, and investing it overseas,” Pallesen said.

In the Portland area, the latest example was recycled-paper manufacturer Blue Heron Paper Company, which closed in 2011 and laid off all 175 workers at its Oregon City mill. The company blamed its closure on rising waste-paper prices and market manipulation by Asian paper mills, supported by government subsidies.

“Unfortunately, these high-paying green jobs are now going to be exported to China along with the recyclable waste paper that is shipped there,” said Blue Heron President Mike Siebers.

In fact, China is now the world’s leading producer of paper and paperboard, according to a forest products industry data source. The raw material for that industry, recovered waste paper, is now one of the top U.S. exports by volume, according to the Journal of Commerce.

King noted the irony in shipping raw materials thousands of miles overseas for manufacture, then shipping many of the finished products back to the United States for consumption, in an era of climate change.

PRESSURE ON THE PRESIDENT

Obama signed new corporate-friendly trade agreements with South Korea, Panama, and Colombia last fall, despite having presented himself as an opponent of NAFTA-style deals during his 2008 candidacy. Pallesen hopes public pressure will help bring greater transparency to the TPP negotiations and improve the terms of the deal.

“Our members are saying, ‘Why are people cutting the president slack?’” he said. “If it was a Republican doing the same thing, we’d be hammering that Republican.”

Such iconoclasm might not be unexpected from a union founded in rank-and-file insurgency, whose newsletter is still titled “The Rebel” and whose website bills it as “the most democratic union in the world.”

As the Center for Columbia River History tells it, reformers in West Coast locals of the International Brotherhood of Paper Makers and the International Brotherhood of Pulp, Sulphite and Paper Mill Workers, frustrated with “their cautious, hierarchical international unions,” established a “Rank and File Movement for Democratic Action,” led fellow workers to disaffiliate and form the AWPPW in 1964, and staged a two-week strike at 48 Western paper mills the same year. The AWPPW is now an affiliate of the Carpenters.

Picketing Obama does not mean the AWPPW endorses Mitt Romney, who would be “ten times worse,” Pallesen said. “We believe our members don’t need us to make an endorsement. We don’t think for them, so to speak,” he said. “We give them the facts.”

The Communications Workers, Machinists, West Coast Longshore union, and the Canadian division of the Steelworkers have attacked the proposed trade deal as well, with the U.S. unions mobilizing members in July for a San Diego rally. But the union movement does not single out Obama in its criticism: The AFL-CIO released a statement urging caution and saying the trade deal’s rules are “by no means certain,” even as text leaked by a Public Citizen watchdog group revealed that the deal follows the NAFTA model.

Staff members of two local labor-community coalitions declined to comment for this story.

Still, even if few will take such a public stand, Pallesen said the AWPPW’s action excited its allies. He has received only positive feedback since the picket, including from fellow trade activists and attendees at the Washington State Labor Council convention. “People called and said, ‘Congratulations, you guys are doing what needs to be done,’” he said. “I have not had anybody say it was the wrong thing to do.”

Alexandra Bradbury is an organizer for a health care union in Portland, Oregon.