‘I had to come to California to help’ 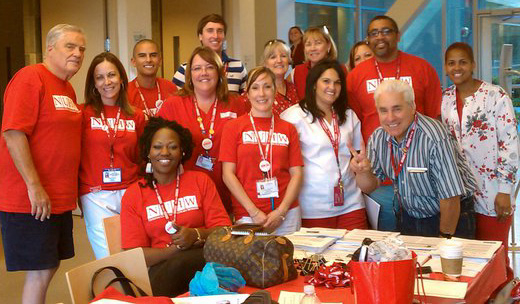 Chicagoan Ed Sadlowski came very close to winning the presidency of the Steelworkers in 1977, running a campaign that galvanized rank-and-filers who wanted the right to vote on contracts, among other rights.

His grown children, who are active in the labor movement, urged him to get involved in what’s become one of the biggest fights in the labor movement, the contest between the National Union of Healthcare Workers (NUHW) and the Service Employees (SEIU). Sadlowski is now in California volunteering on NUHW’s campaign and visiting work sites.

When I was working in the steel mill and a union activist in the USW, I was president of my home local when I was 25 years old. That was in 1964. We had 11,000 members. I won by 100 votes out of 4,000 cast. By the time I was 35 I was district director. I considered myself more “socially inclined” than some of the other leaders. I ran for president of the USW; it was a hell of a campaign. I almost won but stayed very active.

In the last 35 years I continued to work in the labor movement, retired and took my pension from the USW, served on the Labor Relations Board in Illinois, and enjoyed the 11 grandchildren. I’ve done campaigns on a local level… but this—NUHW—is major. Things like this don’t come around every day. I had to come out to California to help. I felt like I really didn’t have any choice but to do what I could to help them win.

The labor movement in our country has done many fine, great things. It has developed people to help us provide for ourselves, to live a better life tomorrow than we did yesterday. But there are few unions that really try to develop a “two-party” system. Most of them, with few exceptions, become single-party, autocratic power structures. Most constitutions allow for competitive elections, but in reality they rarely happen. It breeds a feeling from the workers that they aren’t really part of the union itself. It breeds discontent. They can become dictatorial. This is what has happened in SEIU… so the worker on the shop floor doesn’t have any voice at all.

Here I am, 35 years later, after I tried myself to win some voice for workers on the shop floor, now trying to do the same thing for health care workers in California.

I never met [NUHW President] Sal Rosselli before this week. But I think he’s the real thing, as genuine as can be. He really cares about workers having a voice. Whereas [former SEIU President] Andy Stern had become an autocrat. You know… “what I say has to be.”

Unfortunately, the industrial powers in this country, and the banking interests, from the very inception of the country, the rich have always gotten richer and the middle class—which was virtually created by the labor movement—this class provided whatever social benefits we enjoy today.

Today I spent all day with the former stewards or with workers who’ve formed committees in their workplace to campaign on this election. Ballots are going out in the middle of September. I saw workers, young, earnest, wanting to learn. They have one thing that counts for everything—experience on the shop floor. That’s the only thing you have to have. I put my faith in them. I looked around the room and thought, “I’m the oldest person in the room. What the hell.”

They are fighting for one fundamental thing, for the right to have a voice in the most important things in their lives, their livelihood, their experience right on the shop floor. This should be a given right, not something you should have to go out and fight for every day. The hospital industry is one of the biggest in the country. One of the issues which these workers are fighting for is to get decent health care themselves.

I pray for them, I wish them well. If they win, they will help all workers everywhere in the country. The spark of the idea… putting this idea in other peoples’ heads. Like a port worker in New Orleans…you could say to him: “Have you heard what those health care workers did in California? Opening up their union, getting a voice.” It can encourage people, get them actively involved, get them militant to give direction to their own union.

Related
Washington Mental Health Workers Win Safety Strike »
Buffalo Hospital Workers Beat Concessions, Win on Staffing »
Why (and How) Michigan Nurses Rebuffed a Raid on Our Union »
Academic Workers Join Push for One Member, One Vote in the UAW »
Whose Safety? Our Safety! »

UC Berkeley’s recent elimination of popular sports programs highlighted endemic problems in the university’s management. Chancellor Robert Birgeneau’s eight-year fiscal track record is dismal indeed. He would like to blame the politicians in Sacramento, since they stopped giving him every dollar he has asked for, and the state legislators do share some responsibility for the financial crisis. But not in the sense he means.

A competent chancellor would have been on top of identifying inefficiencies in the system and then crafting a plan to fix them. Compentent oversight by the Board of Regents and the legislature would have required him to provide data on problems and on what steps he was taking to solve them. Instead, every year Birgeneau would request a budget increase, the regents would agree to it, and the legislature would provide. The hard questions were avoided by all concerned, and the problems just piled up….until there was no money left.

It’s not that Birgeneau was unaware that there were, in fact, waste and inefficiencies in the system. Faculty and staff have raised issues with senior management, but when they failed to see relevant action taken, they stopped. Finally, Birgeneau engaged some expensive ($3 million) consultants, Bain & Company, to tell him what he should have been able to find out from the bright, engaged people in his own organization.

From time to time, a whistleblower would bring some glaring problem to light, but the chancellor’s response was to dig in and defend rather than listen and act. Since UC has been exempted from most whistleblower lawsuits, there are ultimately no negative consequences for maintaining inefficiencies.

In short, there is plenty of blame to go around. But you never want a serious crisis to go to waste. An opportunity now exists for the UC president, Board of Regents, and California legislators to jolt UC Berkeley back to life, applying some simple check-and-balance management principles. Increasing the budget is not enough; transforming senior management is necessary. The faculty, students, staff, academic senate, Cal. alumni, and taxpayers await the transformation.