One of Us: A Professor Who Knows Which Side He’s On 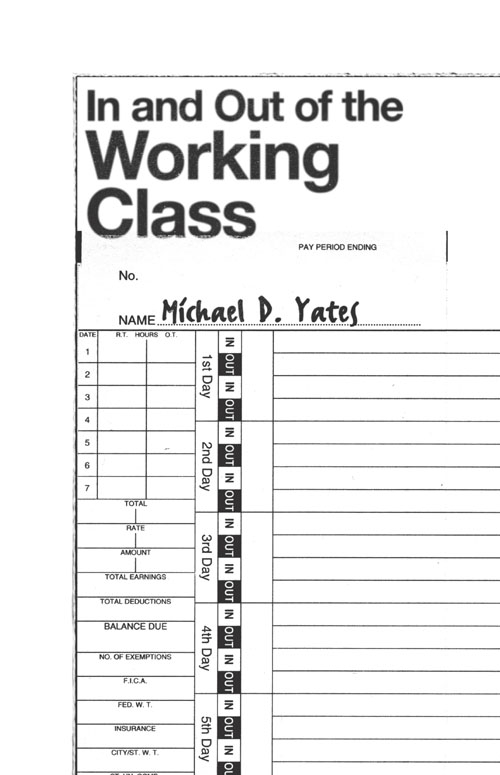 “My father worked in the large glass factory that dominated the town. … Like many industrial serfs, the men and women in the glass factory joined the great CIO union army of the 1930s and brought an end to their serfdom. … Grandpa was in the front line of the daily factory wars, ever present with his stop watch, trying to uncover ways to make more glass with less labor.”

This fictional account of a boy’s father and grandfather on opposite sides of the class struggle reflects the conflicts Michael Yates seems to feel about his own life, growing up in a working class family in Ford City, Pennsylvania, but eventually becoming a tenured college professor.

One of the great features of Michael Yates’ In and Out of the Working Class is that if he hadn’t identified the different parts, I couldn’t have told what was fiction and what was not. Most of the book is political memoir, reliving vital moments in Yates’ development from childhood in a blue-collar, working class family into a class-conscious professor with a radical analysis of the basic flaws of capitalism. But there are also a few chapters that are fictional accounts that seem to fill in his family’s history.

The beauty is that Yates’ historical writing about his own life covers events that he was part of, written so that as a reader, I felt I was there. The fictional accounts that he includes throughout the book are so believable that I had to go back through later to remind myself which parts he lived and which ones he created. The fiction is not created out of whole cloth but is permeated with characters and events present in his life.

Yates devotes considerable time to the racial divisions that divide workers. To his credit, he doesn’t make the mistake that many radical writers do of portraying the working class as purveyors of political purity. He writes of racism and ethnic separation as not merely a political problem that prevents effective unity, and not just as something foisted on us by unscrupulous bosses, but as something in which workers also participate: “Racial epithets were always ready to come out of the mouths of white persons. It was a rare conversation in a bar or club that did not include these.…It was definitely taboo for whites and blacks of the opposite sex to socialize too closely, much less date or marry.”

He even confesses that as a youth, he proudly participated in a minstrel show in which white kids put on blackface and talked in “what we thought was southern black speech, tripping over the words and twisting them around nonsensically to get a laugh out of the audience … I can now say I have never done anything that has shamed me as much as the minstrel show.…The sad thing is the knowledge that so many of my teachers—people who should have know better in 1960 than to have allowed this to happen—enjoyed it.”

Yates randomly chose economics as a major, but then became an economist because that discipline seemed to explain how people, with “unlimited wants for material things,” could be meshed with a society with “limited means to satisfy these wants.”

He writes, “what was especially attractive about economics was its elegance and its counter-intuitive logic. Human beings were motivated by self-interest, and in the marketplaces of capitalism, selfish buyers and sellers confronted and competed with one another. But this heartless competition did not tear the society apart. Instead, as if guided by an invisible hand, the greed of the buyers and sellers resulted in socially optimal production and distribution.”

But Yates became increasingly skeptical of economists who believed “they were learning the secrets of God himself.”

Instead he became increasingly critical of a system in which “society’s productive nonhuman resources—land, raw materials, tools, machines, buildings and the like—are the private property of a small fraction of the total population,” of a society where “most workers must go hat-in-hand to an employer. They enter the workplace with nothing but their hides and can expect nothing but a hiding.”

Yates ends up as a college professor but never truly leaves his class behind. He spends years teaching at a traditional college but comes to practically scorn professors, seeing them as far outside the working class. He seems disappointed in himself, even as he realizes that “I taught the way I did because the college was structured such that a more honest and direct approach was not possible.” Although professors have to work for a living like other workers, they are paid more and seen as more socially respectable, so most of his colleagues looked down on the groundskeepers, janitors, and office staff, for example, when they tried to organize a union.

Yates taught economics in a way that pointed out the internal contradictions in capitalism and directed students to more democratic ideas than those in the mainstream canon. In return, he was marginalized—the business department even eliminated his classes from the list that satisfied the economics requirement. “Finally,” he says, “it became clear to me that advocating radical ideas in my classrooms was not going to help push the society toward greater egalitarianism and more control over the economy by ordinary people.”

He comes to recognize that “it would be more important for there to be a radical union of long-distance truck drivers and railroad workers than one of college professors.” So at another college, he began teaching courses in a labor studies program directly to working people: “These students are often the people with whom I grew up. The older students sometimes remind me of my father and his factory workmates.…Although many of my worker students have not graduated from college, they grasp economic theory more quickly and deeply than did my college pupils. This is because the theory has a greater usefulness to them, and they perceive the arguments through the lenses of working people’s eyes.”

While most of this book is a great read, showing a man’s radical trajectory as he navigates the minefields of a dangerous economic system while attempting to remain true to his working class roots, he doesn’t quite make it through unscathed. The fictional chapter of the path not taken, that of a professor who chose not to fight back, falls flat. Unlike the large majority of the book, real and created, it isn’t convincing.

On the whole, though, this is a great read full of wonderful stories. Although Yates comes to question his membership in the working class because of his career in the college world, there is no doubt where he stands when push comes to shove. One of his snootier colleagues, attempting to denigrate Yates’ class background, says, “You can take Mike out of Ford City, but you can’t take Ford City out of Mike.” Well, Mike, all I can say is that you should wear that as a badge of honor—there is no doubt that you’re one of us.

Joshua DeVries is a former member-organizer for the Association of Flight Attendants and past
president of Amalgamated Transit Union Local 1549.

Related
Review: White Workers Who Buy into Racism Are Shooting Themselves (and Everyone Else) in the Foot »
Review: Blood Runs Coal Tells the Notorious Assassination of a Mine Workers Union Reformer »
Review: Seattle’s General Strike 100 Years Ago Shows Us Hope for Today »
Review: The Long Deep Grudge: A Story of Big Capital, Radical Labor, and Class War in the American Heartland »
Book Review: Women on Strike—A Birth Strike »

Joshua, Thanks for the great review. I appreciate it. Solidarity, Michael Yates