‘There Are No Tea-baggers in Soup Lines’ 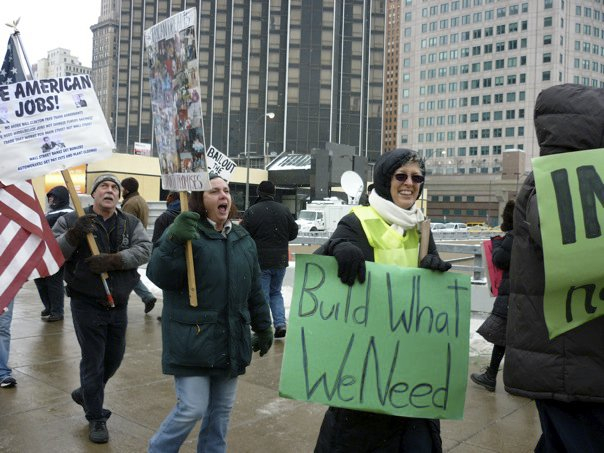 Auto workers outshone the tea-party types as dueling demonstrations took place in the snow outside the Detroit Auto Show today. Small numbers of auto workers gathered to say government should use its role in the auto bailout to direct the factories toward job-creating green products such as high-speed trains and wind turbines—and should enact Medicare for All.

Small numbers of auto workers gathered to say government should use its role in the auto bailout to direct the factories toward job-creating green products such as high-speed trains and wind turbines—and should enact Medicare for All. (See Friday’s post by Frank Hammer for more.)

Members of the National Taxpayers Union, joined by members of the weird-fringe Lyndon LaRouche group, said the government never should have bailed out the auto companies at all, and should stop “meddling in the industry’s restructuring.”

Retiree Stacey Kemp drove with her daughter from Saginaw, several hours north, to carry a sign reading “Our future could suck if we let it.” Kemp retired from GM two years ago after being transferred around to 10 different Michigan plants. She said that with Medicare for All, workers “wouldn't have to worry about jumping from job to job. It’s a big issue for people with families.” She sees the outcome of the 2009 health care reform as “a present to the insurance companies.”

Rose Bomar, from GM’s Detroit Poletown plant and a member of UAW Retirees for Single-Payer Health Care, said, “We don’t need a bill that said we got health care; we need real health care.”

Several of Kemp’s 10 former plants are closed or sold now; she said they could be converted to green production. She mentioned the large, modernized Pontiac East Assembly Plant, formerly known as Pontiac Truck & Bus, which closed in September—one of over a dozen slated for shutdown since last year’s bailout.

Paul Wohlfarth, from Jeep in Toledo, said he was “worried about the Big 3. I went to work every day for 35 years and I expected a secure retirement. There’s no security for any workers and no opportunity for any workers.”

No explosions resulted from the opposing demonstrations, though some picketers made forays to the other side of the street for brief arguments or attempts at conversion. Bill Bryce, organizer for Detroit Jobs with Justice, said, “The tea-baggers should ask for a raise. They’re working for the insurance companies and the banks for free.”

“There are no tea-baggers in soup lines,” declared Ford retiree Mark Farris’s sign. The most popular chant of the day: “Not some lousy bag of tea, union jobs for you and me!”

Jane Slaughter is a former editor of Labor Notes and co-author of Secrets of a Successful Organizer.
Related
Detroit Postal Workers Push to Dump DeJoy and His Ten-Year Plan »
Can Postal Vehicles Help Us Fight Climate Change? »
Ohio Auto Parts Workers Strike to Unionize »
Opening the Door to a More Democratic UAW »
Auto Workers to Vote on Direct Elections »