Should Single-Payer Activists Back Down? 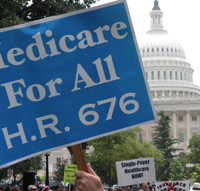 Despite many expressions of support and much advocacy for a single-payer health plan, it hasn't captivated the country in the lengthy health care debate nor moved a bill through Congress. The onus is on single-payer supporters to “take a step back," an AFL staffer argued.

He did a fair job of putting the panel’s single-payer supporters on the defensive at the event, organized by the Metro New York Labor Communications Council.

Unger argued that the House bill passed November 7 is a tremendous victory: the legislation includes a significant new government program and a big tax on the rich—accomplished in the face of merciless opposition and a poisonous political climate.

Unger’s lesson here, apparently, is that out of deeply flawed legislative compromise, real social progress is made.

Did the “public option” that squeaked through the House represent an advance toward a truly universal program? (Leave aside for the moment the Senate compromises to come.)

Jane Slaughter points out in the new edition of Labor Notes (soon to arrive— sign up here to get yours) that some labor leaders supported the public option based on original estimates that up to half the working-age population would enroll. But the version in the final House bill is estimated to cover only about 2 percent of the non-elderly.

Unger, needling single-payer advocates who feel the need to “plant a vision flag,” drilled home his thesis. Even though polls say a majority of the country supports Medicare-for-all-style universal health care, even though important groups like Physicians for a National Health Program are backing it, even though the AFL-CIO itself can unanimously endorse the single-payer “social insurance” model at its September convention—those expressions of support and advocacy have not captivated the country in the lengthy health care debate nor moved a bill through Congress.

Thus the onus is on single-payer supporters to “take a step back toward the people,” Unger argues, and “make sure the next time we all step forward together.”

Janine Jackson of the media watchdog group FAIR responded that calling legislation that emerges from D.C. the expressed will of “the people” is a little rich.

Others might go further, arguing that going up against corporations and their lobbies that spend $1.4 million a day to defeat your agenda requires the opposite of carefully plotted compromises with the drug-makers and the insurance honchos.

But why didn’t labor leaders embrace single payer as their opening bargaining position, even if they thought it doomed to fail?

We didn’t get any closer to hearing an answer from those in the know at the AFL-CIO. (The speakers had the 3x5 approach to accepting questions.)

Whether they back single payer or something less, panelists agreed on one thing Tuesday—labor can’t allow Democrats to go down to defeat at the midterm elections, and have to defend Obama. “There’s nobody better out there,” said Bill Henning, CWA Local 1180 vice president.

Mischa Gaus was the editor of Labor Notes from 2008 to 2012.mischagaus@gmail.com
Related
Viewpoint: It’s Time to Tap into Labor’s Fortress of Finance »
After Strike Threat, Wisconsin Nurses Get a Possible Path to Union Recognition »
Wisconsin Nurses Set to Strike, As Employer Claims It's Banned from Bargaining »
Viewpoint: Two Contrasting Visions of the Labor Movement Were on Display in June »
We Can't Just Keep Saying 'Pass the PRO Act.' We Have to Organize. »

Nick Unger has been telling single-payer advocates to "take a step back" for a very, very long time. One is tempted to ask "what makes this news?" Will Mr. Unger really be kept from savoring the "tremendous victory" he finds in Congress by an ongoing cry of "Single Payer Now"?

Is this need to "hold court" perhaps a sign of advance for the single payer cause? Or simply an expedient effort to neutralize potential single payer opposition to "reform" largely written by the insurance industry itself, but championed by the Democratic Party? Perhaps a bit of both?

Dr. Marcia Angell has written that the no bill is better than the House bill. Dr. Steffie Woolhandler has said that it is time for Congress to "start from scratch." Single Payer New York and Healthcare-Now have come out against the bills in Congress. Many single-payer advocates in New York and across the country have rallied to defend Rep. Eric Massa's "No" vote on the House bill.

But what happened to HR 676 is the big story of the year. Single payer not only won endorsement on the floor of the AFL-CIO convention but also forced itself into the Congressional process. All the way up to the day before the big house vote the Democratic Party leadership found itself spinning excuses to prevent any debate or any vote on single payer on the floor of the House. That day the AFL-CIO and eight unions put an ad in "Roll Call" urging a yes vote on a substitute single payer amendment.

These developments reflect the independence and the potential of the still-growing single-payer movement. They prove the popularity of single payer among the American people (contrary to Unger's assertions.) It is significant too that grassroots vigor will not be dampened by the tired old refrain (that Unger officiously reiterates) that since single payer is not politically feasible it is time to step back and abandon the cause.

how far has lesser evilism got us in the past decade? how about in the past two decades? what about the past 50 years? Labor has been slidding right along with the Democratic Party further and further toward the right, toward corporatism and top-down structure, thinking and methods. Its high time we broke with the Dems, broke completely free of them and had ourselves a party of our own; a Labor Party, a MASS Labor Party.

How does it make any sense to continue fighting to "take back" a party that was never ours to begin with? when we "defend Obama" because "there's nobody better out there", when we defend the Democratic Party for the same reasons, we wind up sacrificing our ability to grow, our ability to fight and our ability to organize and WIN struggles, because we're too busy tail-ending the Democrats because we're afraid of the alternative...

Honestly, as a supporter of the currently-embrionic US National Labor Party and local Labor Parties across the counrty, it is my belief that lesser evilism, supporting the Democrats and helping them beat the Republicans, is MORE destructive to us than if the Republicans win. At least when the Republicans are waging attacks against workers wages we are able to get our union leaders to engage in open struggle against the Govn't and the political establishment. When the Democrats twist the knife in our backs, all the while holding hands with our leaders in labor and singing kumbaya, our leadership has a real strong tendency to refuse to fight; to tell us "we can't fight the Dems because it'll hurt them in the next election" or they'll even try to sell us on the idea that we ought to take the poison pills Dem policymakers push at us once they're elected, telling us "its better than nothing" or even that somehow the anti-labor policies of the Democrats are "a good thing".

if it walks like a duck and talks like a duck, its probably a duck. if the Dems dont act like a friend of Labor, they're probably our enemies. Labor has gone nowhere but into a freefall supporting Democrats for over 50years now. If Labor is to rise again it cannot go into struggles beholden to politicians, with one hand tied behind our backs. We need a party of our own, and brashley46 posted before me; it was on the basis of a National Labor Party (NDP) that Canada won its NHS province by province as part of a national campaign. For all those who would tell us that "now is not the right time" or "a Labor Party would be doomed to failure" I answer: we're already failing. Albert Einstein said that the definition of insanity was "doing the same thing over and over yet expecting a different result". Its high time we broke cleanly away from the Democrats and started fighting the fights we know need fighting, no compromises. There's no time like the present...

Obviously, Brother Unger has forgotten about the Stupak Amendment, which, in effect, bans insurance carriers that receive government funding from paying for abortions.

For all intents and purposes, the Stupak Amendment strips American women of their abortion rights - and that is definitely a labor issue for the 50% of union members who are women!

But I guess it's more important for Brother Unger to support the Democratic Party than it is to defend the abortion rights of working class women!

And there's nobody worse, either. There won't be anybody better until you people follow our Canadian example and build your own party. The Canada Health Act exists because the NDP exists. Anybody who tries to tell you that a party who would give you anything less are your friends is LYING.