Teamster Insurgents Plan for a Win—And What Comes After

In mid-November the Teamsters (IBT) will count the votes to determine who will lead North America’s logistics union for the next five years. Whoever wins will have two enormous items at the top of their to-do list: scaling up logistics organizing, including at Amazon, and bargaining the country’s largest union contract, UPS.

Current General President James P. Hoffa, son of the legendary “Jimmy” Hoffa, is retiring after more than two decades in leadership. The two slates vying to replace him have been campaigning for nearly two years, with a petition accreditation process last fall and the nominating convention in June.

Unlike in most unions, all 1.3 million Teamsters in the U.S. and Canada are eligible to vote directly for the top leadership positions—a reform that members won in 1991 as part of a government consent deal to stamp out corruption. Ballots were mailed out October 4.

One slate is endorsed by Hoffa: Teamster Power, led by Steve Vairma of Local 455 in Denver and Ron Herrera of Local 396 in Los Angeles County.

But going into the final weeks, it appears the insurgent slate has the edge. Teamsters United—also known as the “OZ” slate—is led by Sean O’Brien of Local 25 in Boston and Fred Zuckerman of Local 89 in Louisville. Zuckerman, running for president in 2016 on the previous incarnation of the Teamsters United ticket, came within just 2 percent of defeating Hoffa.

The Vairma slate is running as a continuation of Hoffa’s policies, including his concessionary bargaining (such as at UPS) and reluctance to use the strike as a weapon. They call O’Brien reckless with strikes and attack his coalition with the national rank-and-file caucus Teamsters for a Democratic Union (TDU). They consistently refer to the “OZ/TDU slate,” demonizing the insurgent movement the same way the Hoffa administration always has. 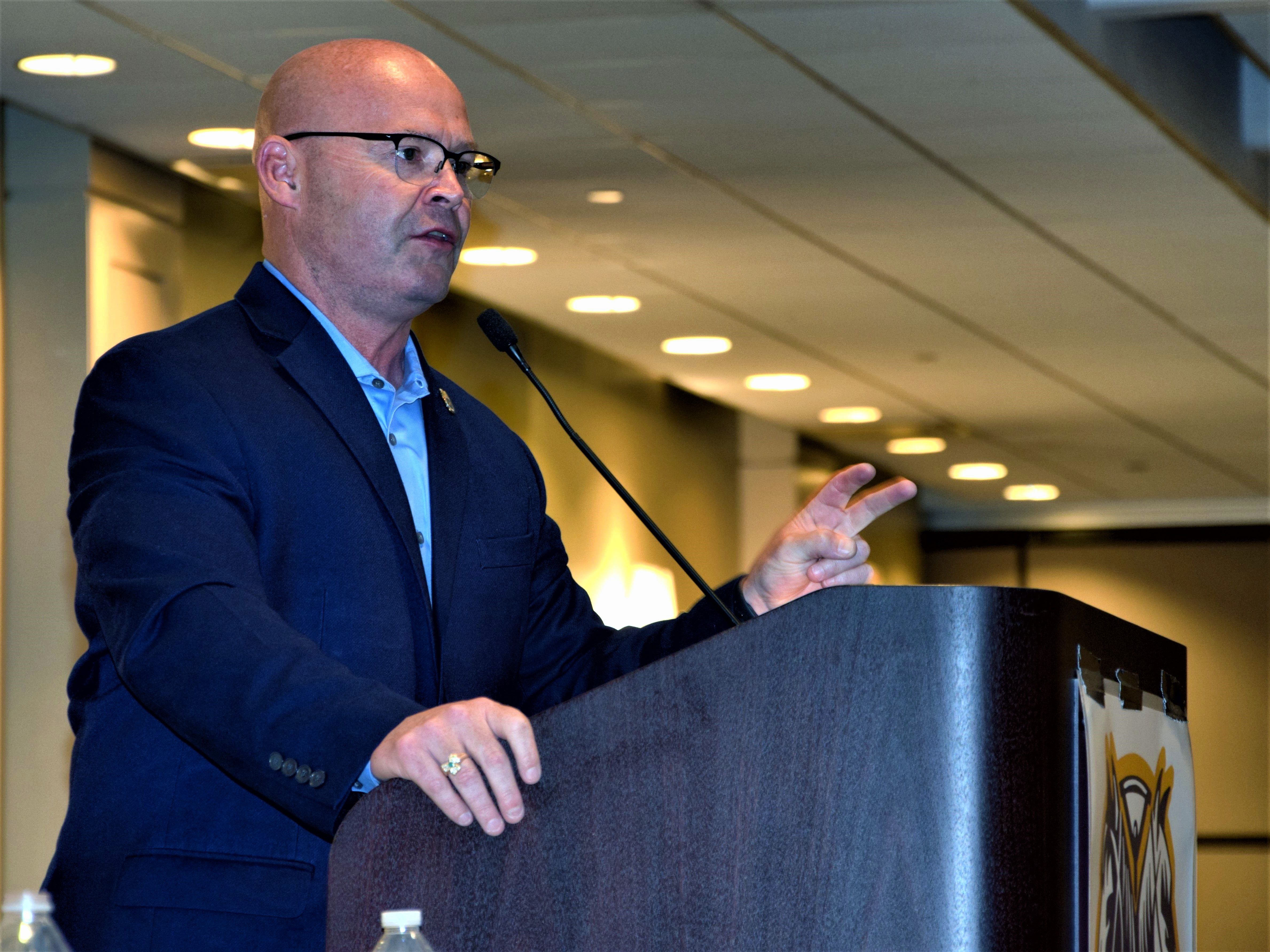 Presidential candidate Sean O'Brien, who embraces the militant label his opponent slaps on him, addressed the TDU Convention on October 1. Photo: TDU

O’Brien embraces the militant label. His speeches mock the fact that Vairma bragged that he has called just six strikes in his long career as a union leader. O’Brien has led significantly more.

Vairma fires back that O’Brien has many former Hoffa supporters on his slate, which is true. O’Brien says his coalition includes all Teamsters who want to take up the fight.

TDU members and leaders initially hesitated to jump on board with O’Brien because of his long association with Hoffa. But they worked together in Vote No movements in the national UPS and trucking contracts, and by the 2019 TDU Convention, they voted overwhelmingly to endorse O’Brien, who came to speak and answer questions.

The employer-friendly Hoffa leadership has done much of the work to generate and fuel the opposition.

Hoffa initially tried to head off the insurgency by appointing O’Brien to lead the contract negotiations at UPS in 2017, until the New England Teamsters leader committed an unpardonable sin: he sought to bring all Teamster officers representing UPS members into the negotiating process, including ones who had opposed Hoffa in his 2016 election like Fred Zuckerman and TDU leader Matt Taibi.

Hoffa quickly fired O’Brien, who summed up the reasoning in a public letter: “My desire to include representatives from locals who opposed you in the last election were blocked and considered treasonous.”

Zuckerman, who leads a local which includes approximately 10,000 UPS workers, wrote at the time: “I don’t care what side of the fence you were on in the last election. This is deplorable when you remove the lead negotiator because he is willing to stand up for the members and against the company.” From that point, a new Teamsters United coalition began to grow.

A central campaign issue for Teamsters United is the quality of the UPS master contract, now covering nearly 350,000 workers since the pandemic hiring boom. It’s one-quarter of the union and also sets a pattern for other Teamsters contracts. 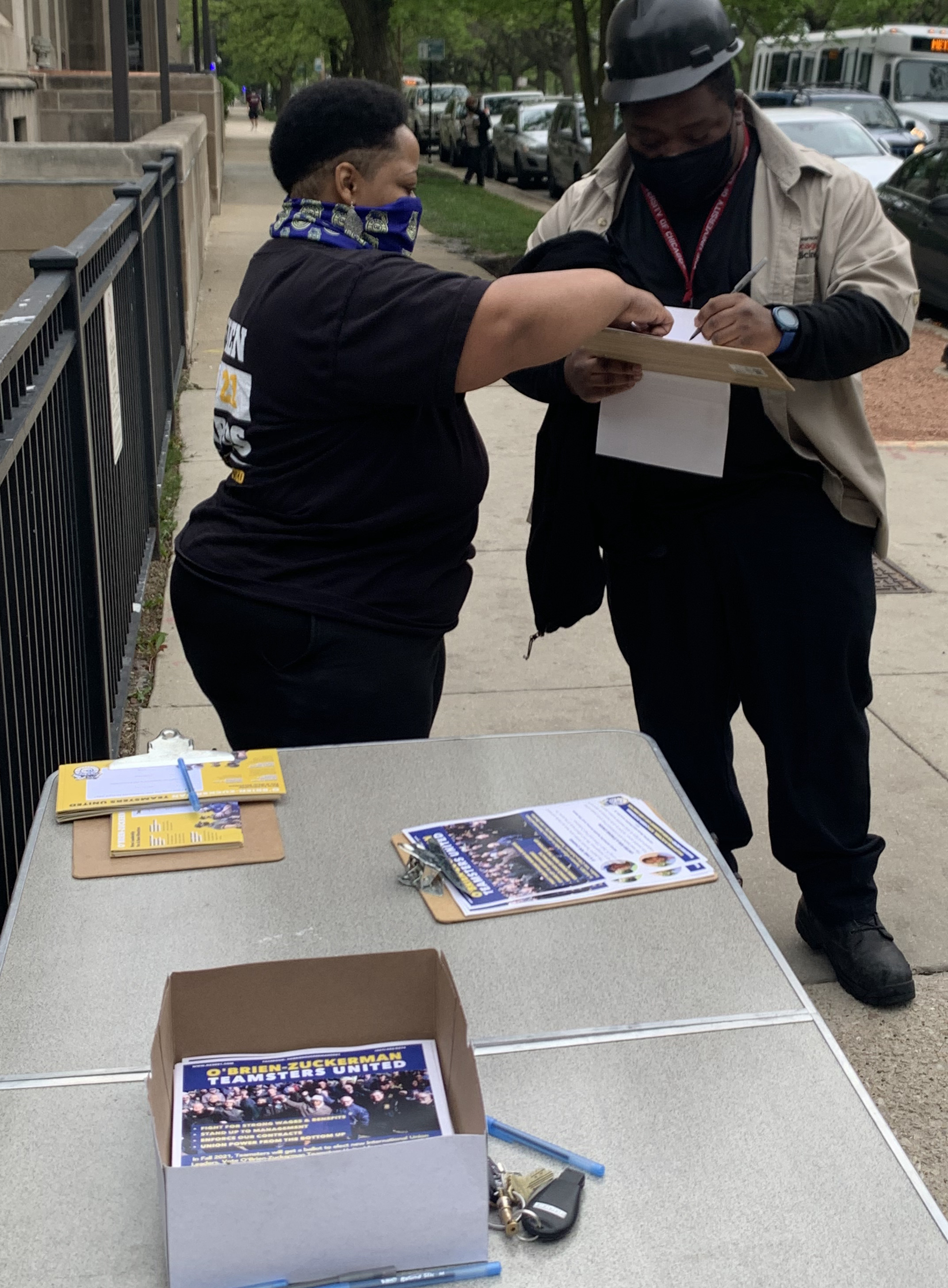 O’Brien and Teamsters United are furious over the concessions made in the last round of negotiations, especially a new article that allowed the company to create a lower tier of delivery drivers. This infamous Article 22.4 is a rallying cry for militants. O’Brien and Zuckerman vow that they’re willing to strike to eliminate it.

The UPS contract already had a two-tier division—the part-timers who make up the sorting and loading workforce start at just $15 an hour under the contract (UPS often pays more to attract workers)—but Article 22.4 expanded the lower tier to include drivers too. Article 22.4 drivers work a Tuesday through Saturday schedule for lower pay with no protections against unlimited forced overtime.

UPS was also granted the ability to “Uberize” some delivery work through the creation of “Personal Vehicle Driver” jobs. While the contract protected regular package car drivers from being forced to use their own vehicles, it did not protect them from losing that work to yet another underclass that has grown through the never-ending “peak” season of the pandemic.

The Vote No movement should have won in 2018, when a majority of voting UPS Teamsters rejected this agreement. But instead of striking the company or returning to the table to bargain something better, Hoffa’s negotiators found a loophole in the union constitution—the “two-thirds to reject” rule—and used it to impose the unwanted contract.

UPS Teamsters are still angry about it. “[Lead negotiator] Denis Taylor told us that it was a good contract, but we knew it would be abused,” said Jeff Schenfeld of Local 767 in Dallas-Fort Worth, who is campaigning for Teamsters United.

UPS cannot hire part-time workers at the contract rate in many areas of the country. “During this whole pandemic the company was desperate to get people—so much that they bumped up starting wages, some locations by as much as $10 an hour,” said part-timer Kristen Jefferson, a steward and TDU leader in Local 705 in Chicago. “This tells us that the company can afford to pay us our worth, then and now.”

Vairma’s campaign talks about a “smart strategy” to get improvements without a strike. In the official debate between the number-two candidates, Vairma’s running mate Ron Herrera of Los Angeles repeatedly posed himself as a labor statesman who has lunch with important politicians. Meanwhile Teamsters United’s Fred Zuckerman hammered away at concessions and a failure to organize in the union’s core industries.

Delegates to the Teamster convention in June of this year finally did away with the “two-thirds rule” loophole that had allowed Hoffa to impose the rejected UPS contract. O’Brien and Zuckerman championed this and other reforms—such as paying strike benefits from Day 1 of a strike and requiring rank-and-file members on all bargaining committees. These were popular issues with the union’s ranks, and in the end, the Vairma delegates voted for them also.

On other issues long proposed by TDU, such as safeguarding a reasonable threshold for nomination for IBT office (5 percent of delegates), the O’Brien delegates got close but fell short because the Vairma forces had a slight majority of the delegates.

Both slates have promised to take the long-term battle to organize Amazon in a more serious, nationally coordinated manner.

THE REAL FIGHT AHEAD

TDU, the insurgent reform movement, held its annual convention in Chicago October 1-3, one day before the ballots were mailed. The convention is a combination of educational workshops, caucuses, strategy sessions, and inspirational speeches. The members in attendance, most of whom paid for their own travel and registration, donated more than $92,000 at the Saturday evening fundraiser.

It was bigger, more diverse, and younger than recent TDU conventions.

The 350 activists and leaders also discussed their next steps after the election victory they are working to achieve. They aim to train members for the contract fights ahead and develop a fresh crop of Teamsters leaders in locals. Understandably, there have been concerns expressed within TDU about how to make sure that new leaders will stick to their program of change and not water it down when they run into resistance from employers and old guard officials.

Many candidates from the Teamsters United slate—some members of TDU, some not—were in attendance to take part in those discussions. O’Brien made clear in his plenary speech that “our coalition between TDU, Teamsters United, and anyone else who wants us to take the fight against the employers will last well beyond the election.”

The coalition gives this year’s opposition an extra oomph that may put them over the top. Nick Perry, a 15-year Teamster package car driver and shop steward at UPS in Columbus, Ohio, has found common ground with former rivals in his local over the years, and now he sees the same thing happening on the national scale.

“If you’re in a group where everyone agrees with each other on everything, your group isn’t very big, as a general rule of thumb,” Perry said.

TDU organizer Ken Paff regards this election as “the opening of a door.” “We want a union that isn’t telling members what can’t be done,” he said. “We want one that says, ‘When members want to fight, we’ll be there with them shoulder to shoulder.’”

Greg Kerwood, a steward from Local 25 in Boston, calls this election “a pivotal moment in Teamster history.”

“This is the moment when we must decide if we will remake our union into a 21st-century force with which to be reckoned, or we will rest on our laurels and go gentle into that good night,” Kerwood said.

Teamsters for O’Brien-Zuckerman have donated thousands of hours of vacation time to stand at the plant gates and collect voter pledge cards. On the accreditation petition they blew through the required 32,000 signatures and sent in more than 102,000 as a show of strength (in 2016, their coalition gathered 63,000). The final weeks are a frenzy of phone and text banking to get out the vote.

But one of the most common sentiments repeated by workshop leaders at the convention was, “The real fight is about to begin after we win.”

Ryan Haney is a truck driver in the freight industry and member of Teamsters Local 745 in Dallas, Texas. He attended the TDU convention in Chicago.

This article is a joint publication of In These Times and Labor Notes.