Unemployment is spiking in ways never before seen and without it, a starkly unequal nation with a badly frayed safety net faces possible Depression-era pain. Photo: Jeremy Buckingham, CC-BY-2.0, cropped from original.

This story has been updated to reflect changes in the policy and political debate.

At 1:30 a.m. today, Senate and House leaders and the Trump administration reached a deal on an enormous $2 trillion proposal to dramatically expand unemployment benefits, provide direct payments to American households, give money to state governments and Native American tribes, and assist businesses reeling from the economic catastrophe unleashed by the COVID-19 pandemic.

The economic catastrophe made this middle-of-the-night package urgent. Unemployment is spiking in ways never before seen and without it, a starkly unequal nation with a badly frayed safety net faces possible Depression-era pain. Today’s bill, while not perfect, will begin to provide some relief.

The Institute on Taxation and Economic Policy (ITEP), the sister organization of the labor-founded advocacy group Citizens for Tax Justice, closely watched the dueling plans before this final deal emerged. The deal must be approved by both the House and the Senate, a complicated challenge when members of both bodies have been diagnosed with COVID-19 and cannot vote in person.

The deal, based on negotiations over a deeply flawed Republican Senate bill, includes major elements that worker advocates had fought for as competing plans emerged over the past frantic 11 days, but is much stingier in direct cash to individuals and families than the plans that Democrats and worker advocates had pushed.

The $2 trillion package is enormous by historical standards. Some observers nonetheless think it will be insufficient.

Elements that Democrats successfully incorporated include a large expansion of unemployment compensation, by up to an additional $600 per week for four months, and including gig workers, $150 billion in funding for the health care system, $150 billion in state, local government, and tribal relief, $27 billion for small business, $55 billion for emergency education and transit funding, $30 billion for the Disaster Relief fund, and more than $10 billion for Indian Health Services and other tribal programs.

Labor and other advocates fought to strengthen accountability on the aid to business. Democrats won much of this, including prohibiting loans from Treasury programs to Trump businesses; banning stock buybacks for the term of the government assistance plus one year; public information about any aid provided to corporations; creating a Special Inspector General to oversee public spending; tax abatement for some students repaying loans; and elimination of $6 billion to big oil. Finally, intense public pressure helped win prohibitions on stock buybacks and executive bonuses in the airline industry, which had abused earlier government aid.

Advocates had pushed for worker protections at any business receiving aid, such as prohibitions on layoffs, pay cuts, or union busting, but it is unclear whether these protections made it into the final package. Progressive critics argue that the oversight added is insufficient and that the bill will allow enormous corporate giveaways, far beyond what is initially apparent.

In direct aid to families, the final deal includes $1,200 per individual and $500 per child for those earning up to $75,000 a year, phasing out between $75,000 and $99,000 in earnings. But it leaves out immigrants who file taxes with an Individual Taxpayer Identification Number, which includes all undocumented immigrants and a small share of legally present immigrants.

With this deal nearly inked, it’s worth reviewing the provisions that were floated over two weeks of competing perspective on economic policy. 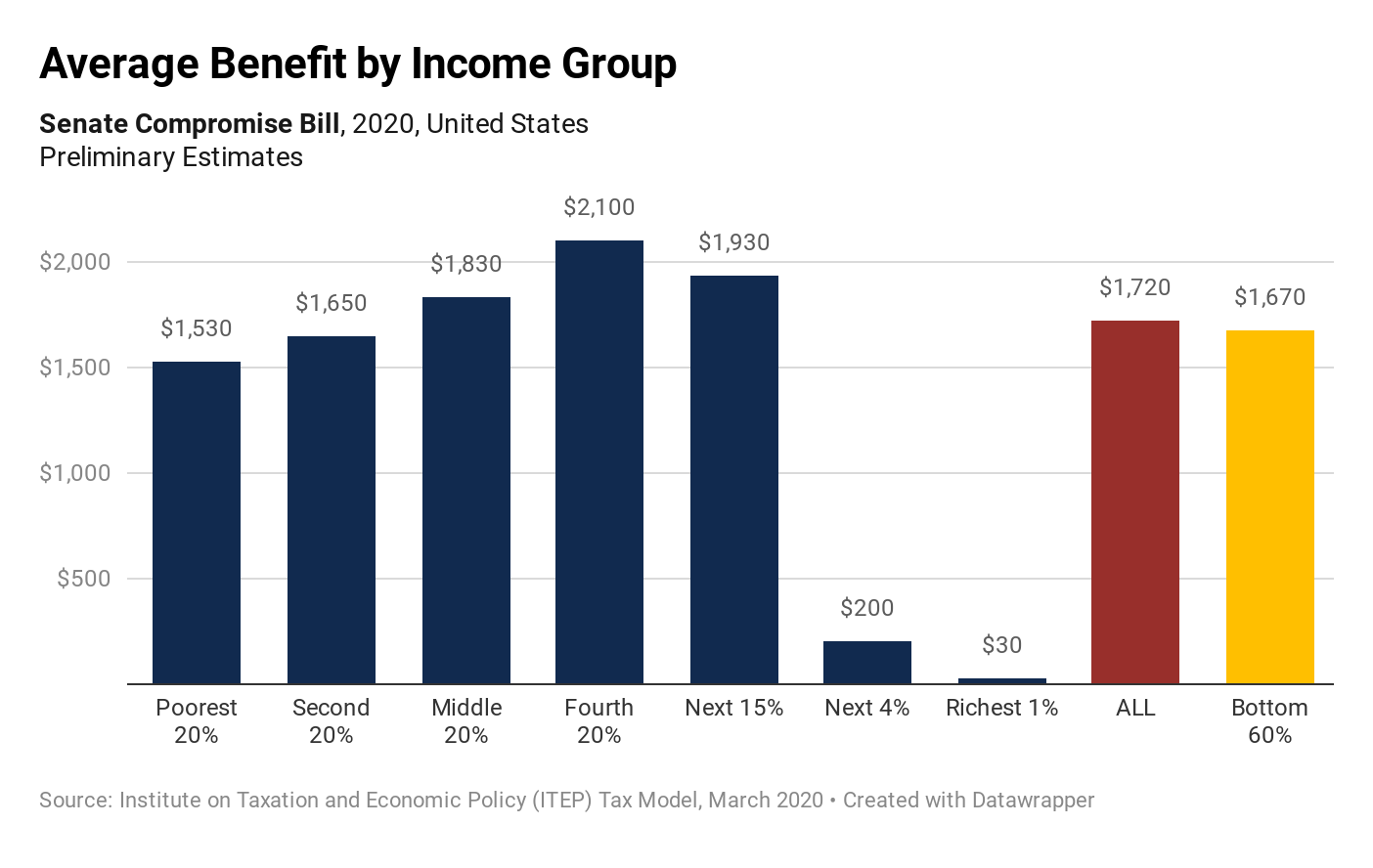 TRUMP’S INITIAL PLAN AND AN ALTERNATIVE

Tax, labor, and anti-poverty advocates helped kill off President Trump’s deeply problematic March 10 proposal to eliminate both the employer and the employee side of the payroll tax—the paycheck deductions we pay for Social Security and Medicare. This $843 billion proposal would have sent 65 percent of the benefits to the richest 20 percent of earners and a staggering 25 percent to the top 1 percent. Even Republicans balked at this inequality-increasing proposal, which would have given no benefit at all to people who lost their jobs due to this crisis.

Advocates put forth the competing Emergency Money to the People, to provide up to $3,500 per adult and $1,500 per child in 2020. This would have given a much bigger boost to the bottom 60 percent of taxpayers, those most likely to immediately spend any new money they receive, and thus better soften the downturn. While the proposal didn’t gain traction in Congress, it shifted the conversation toward direct aid, delivered in a universal way, rather than in a way that increased inequality.

Trump’s poorly designed proposal died but Senate Majority Leader Mitch McConnell of Kentucky began with similar sentiments—reward the wealthiest, with extra breaks and giveaways to airlines and other businesses. McConnell’s initial proposal cost more than $1 trillion, most of it directed toward tax breaks for corporations and other businesses. It went out of its way to exclude the poorest taxpayers and failed to offer anything to state and local governments, though such aid is essential as the state fiscal crisis is already taking hold. Only about one-third of those among the poorest 60 percent and virtually nobody among the poorest 20 percent would have received the full tax rebate under McConnell's plan, which also excluded some immigrants.

After the initial critical reaction, McConnell modified his proposal, but the new version was only slightly better and remained a regressive giveaway to wealthy people and corporations. It was this new version that later became the starting point for negotiations.

The new bill included huge bailouts to corporations, with minimal standards. The suggestion that employers avoid layoffs “to the extent practicable” was vague and unenforceable. The bill did nothing to ensure jobs would be retained, pay would be decent, or money would not be spent on executive bonuses or stock buybacks. These are all elements that Democrats later successfully incorporated into the final deal.

Democratic Senators Sherrod Brown of Ohio, Cory Booker of New Jersey, and Michael Bennet of Colorado restored sanity to the Senate conversation with a proposal providing more universal benefits, with far more going to poor and working households. Under the Brown-Booker-Bennet plan, taxpayers would have gotten up to $4,500 in 2020 for each member of their household. Total payments to families and individuals would have been $1.4 trillion, compared to $216 billion under the GOP proposal. All in the bottom 60 percent of earners would have received the full $4500, pumping money into the economy, boosting consumer demand, and slowing the downward spiral. The Democrats’ plan was a non-starter in a Republican-controlled body, but it highlighted the inadequacy of the GOP plan. 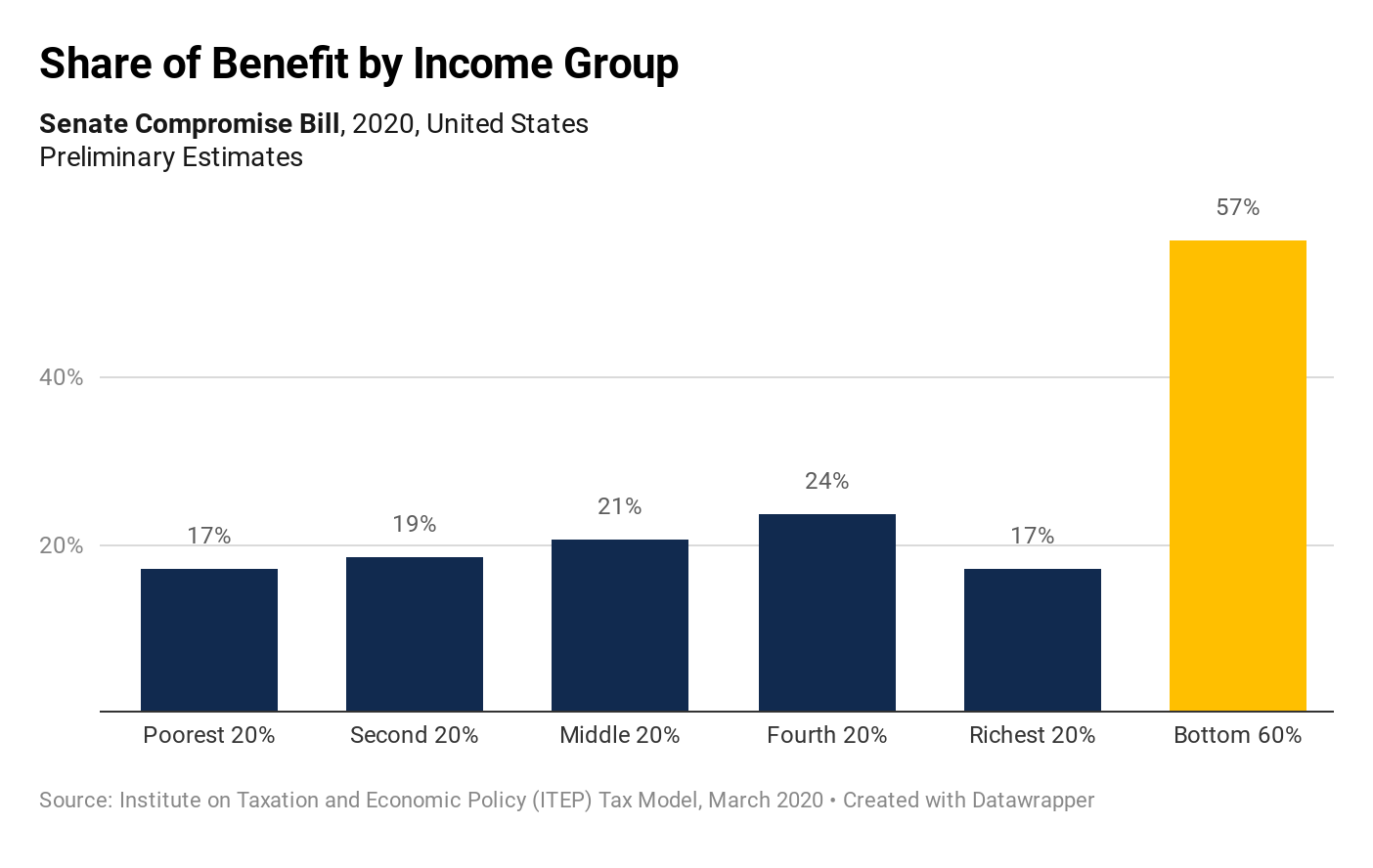 Thinking that McConnell’s modified plan had failed, House Democrats put forth a more comprehensive, better-targeted proposal on Monday. Unfortunately, McConnell’s plan later emerged as the starting point for negotiations. The House Democrats’ plan would have provided a rebate of $1,500 per family member and expanded the Earned Income Tax Credit (EITC) and Child Tax Credit (CTC), which are targeted toward poor and low-income working families. The bill essentially tripled the EITC for childless workers and broadened age eligibility. It made the CTC “refundable”—the IRS would send a check to those qualifying. This would have been helpful to the poorest families, who up till now have not benefited from a nonrefundable CTC because they don’t earn enough to pay federal income taxes.

The House bill, with a price tag of about $500 billion in 2020, was targeted and had income limits, but it was smart in providing immediate benefits and later taxing those whose income exceeded certain limits, since it’s hard to predict what incomes will be in 2020 given the job loss tsunami. The various GOP proposals, including what prevailed, have instead based limits on past years, which will be totally irrelevant for many families.

The House bill’s benefits were evenly shared across income groups, with 62 percent of the combined benefits going to the bottom 60 percent—middle, moderate, and low-income earners. All in all, the House bill would have done more to boost the economy and help those who will be most hurt by the economic side of the COVID catastrophe.

Ultimately, though, the deeply flawed Senate bill became the starting point for negotiations. You can see a comparison of the two proposals, as of Tuesday here.

Pushed by worker advocates and other activists, throughout the past 10 days Democrats promoted proposals that were larger, better-targeted, contained non-tax provisions that do more for workers, and had more accountability. Republicans pushed versions that were timid in relief to individuals, targeted away from struggling families and toward those with more wealth, and included big giveaways to business with few strings attached.

Today’s final version, while much smaller in direct aid to families and individuals than proposals like Brown-Booker-Bennet, is nonetheless an enormous infusion to reverse the downturn, directed toward health care, local government, education, unemployment, and to a lesser degree toward direct payments to people. It will undoubtedly enable corporations to walk away with big payouts in ways that rightly anger progressives. What is clear is that the economy, and with it working people, cannot survive without the state fiscal aid, help for displaced workers, and other non-corporate pieces of the bill.

The economy is spiraling downward by the day and the memory of the Great Recession’s too-weak, too-slow, too-corporate solution remains raw. That “solution” increased inequality and wasn’t targeted in a way that really staunched the bleeding. Advocates are pushing House Democrats to make sure that today’s $2 trillion bill has a better chance to provide the relief that families and communities need.

Amy Hanauer is executive director of the Institute on Taxation and Economic Policy and Citizens for Tax Justice.