UAW & GM Have an Agreement. Will Strikers Vote Yes? 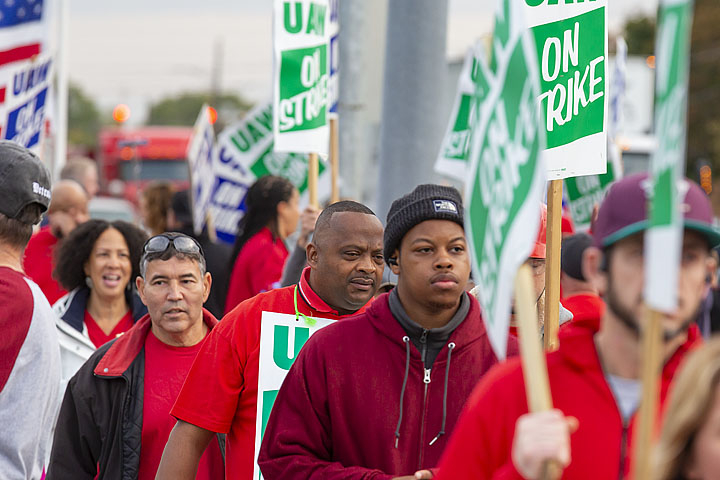 The tier system has left thousands of auto workers performing the same jobs union members did in the past for far less pay and with fewer, if any, benefits. Photo: Jim West / jimwestphoto.com.

On the 31st day of the longest auto strike in 50 years, General Motors and the United Auto Workers announced a tentative agreement.

The UAW's GM Council, made up of representatives from each GM local, will meet tomorrow. If they approve the pact, as expected, it will be submitted to strikers for a ratification vote.

The Council will also decide whether workers will stay out on strike during the vote or return to work immediately, as has been the union's practice in past strikes.

No details have been made available, but rank-and-file workers on the picket lines have made it clear that the major priority for them is abolishing the tiers that have fractured the auto workforce. The tier system has left thousands of auto workers performing the same jobs union members did in the past for far less pay and with fewer, if any, benefits.

Some of the ways the GM workforce has been divided:

Many jobs off the assembly line, such as janitorial and logistics, once claimed by high-seniority workers, are now outsourced to other companies that pay far less.

At GM’s largest North American facility, in Spring Hill, Tennessee, the UAW is wall-to-wall in the plant but only 3,600 of the 5,200 hourly workers are directly employed by GM. The remaining 1,600 are employed by “supplier partners” that work on-site. Many of these employees, like the 850 Aramark workers now on strike at five GM plants in Michigan and Ohio, make as little as $15 an hour.

“If we had our druthers, we would love to have our 'partner' jobs be GM workers under our umbrella,” said Mike Herron, chairman of UAW Local 1853. “Historically, [these jobs] went to high-seniority workers because they were less demanding than being on the assembly line.”

There is no path in the UAW contract for outsourced workers to get hired by GM.

Temporary workers are a major problem at General Motors. They perform the same work as Tier 2 and Tier 1 workers, but receive a lower hourly rate and worse health benefits, have only three days off a year—unpaid, and receive no profit-sharing. Tier 2 and Tier 1 workers typically receive about $1,000 for every $1 billion in pre-tax profits GM makes.

In many plants, temps have been working as long as four years, starting at $15 an hour. They are often laid off and brought back again—starting over at the bottom pay rate.

The 2015 contract opened the door still wider for GM to expand the use of temps, now estimated at about 7 percent of the hourly workforce.

“I did not vote for the last contract because of the language on temporaries,” said Roberta Gainer, who has worked at GM's Tonawanda Engine Plant near Buffalo for 40 years. “The way the language was written, I knew GM didn’t want to hire permanent workers.”

In effect, GM no longer has to abide by a 90-day probationary period for new employees. Instead, the company just hires them on as temps and strings them along indefinitely.

In 2015, the UAW chose Chrysler as the target for establishing the pattern agreement and struck a deal that maintained the permanent two-tier system in which workers hired in after 2007 made significantly less than Tier 1.

When the deal was recommended to members, a “vote no” campaign bubbled up in anger. Almost every local voted it down, in a landslide 2-1 rejection. Bargainers were forced back to the table and came back with a new agreement that included an eight-year progression for Tier 2 workers to top out at $28 an hour.

Legacy workers have worked for the Big Three since before the 2007 concessions kicked in; they are an ever-shrinking portion of the workforce. Production workers make about $31 an hour.

While only 5 percent of an automaker's total cost of producing a vehicle stems from its own labor costs, the Big 3 have pushed to drive that number down even further. One of their most effective strategies has been to break the workforce into smaller segments. For legacy workers, the company’s message is clear: just be grateful for what you have.

What’s so impressive about this 31-day strike is that legacy workers have chosen solidarity over the company-promoted mentality of “I’ve got mine.”

Chris Brooks is a staff writer and organizer with Labor Notes.chris@labornotes.org
Related
Inside the Alabama Amazon Union Drive: An Interview with the Lead Organizer »
How We Turned Bargaining Around at Law360 »
China: Leader of Delivery Riders Alliance Detained, Solidarity Movement Repressed »
The BAmazon Loss and the Road Ahead »
Massachusetts Nurses Face Down For-Profit Health Care Giant Tenet in Daring Strike »