Voices from the GM Picket Lines 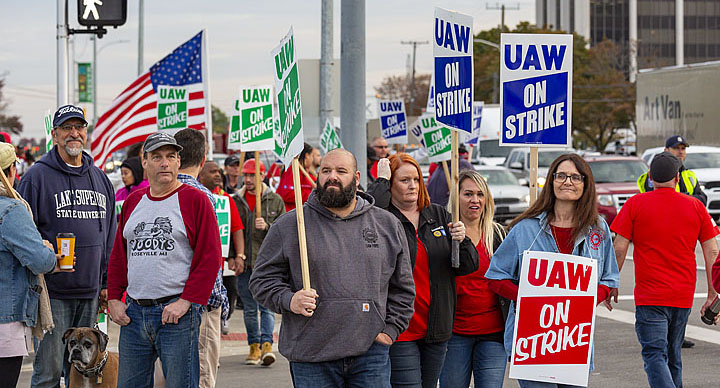 GM's auto workers are striking for a fair wage for all their coworkers. Photo: Jim West / jimwestphoto.com.

The GM strike jumped off suddenly September 16. At the start, it wasn't clear what the bargainers were going for—including to members themselves. Since then, judging by dozens of interviews on the picket lines, a remarkable consensus has developed among the Auto Workers rank and file: their top priority is wage equality, for second-tier workers and especially for the misnamed “temps.” Temps may work for years doing the same work as Tier 1 and Tier 2 workers, but with low pay and almost no rights.

This insistence on equality is heard whether the striker has 47 years' seniority or three.

In this largest and longest UAW strike since 1970, the union's public list of demands is mostly vague: “fair wages, job security, our share of profits, affordable quality healthcare, and a defined path to permanent seniority for temps.” Brief updates online from head bargainer Terry Dittes are just as generic. But rank-and-filers have made their own decisions on priorities.

Here are some quotes from the picket lines at GM plants, mostly around Detroit, on what auto workers want to see in their contract, on solidarity between the generations, and on GM's betrayals.

WHAT SHOULD THE MAIN CONTRACT GOAL BE?

Make the temporary employees whole, because they’ve been working here for years. And bring down the years to get to the top tier—eight years is kind of stretching it... It’s unfair to take advantage of them, someone who has four mouths to feed, while upper management is making what they’re making.— James Fulks, 42 years, Detroit-Hamtramck Assembly

A fair wage for everyone. Everything fair and equal to all families and the workers not disenfranchised. We invested in GM, time for them to invest in us.— Grace Green, 30 years, now working at her seventh GM plant

Give us back everything they took and don’t take no more. The TPTs are working just as hard as we do.— Liz Malone, a Ford worker [“Temporary Part-Time” is Ford’s term.]

I want my trade back. You put all these years into it. You're taught about the skilled trades in high school, they said it would be a job for life. You could leave one place and go to another.— Phil Sanchez, 42 years, Detroit-Hamtramck Assembly, who was a millwright but is now part of a jack-of-all-trades classification called “mechanical”

Get everything back: cost of living, pension, leave health care the way it is. Bring the jobs back, job security, get rid of the temps, get rid of all tiers.— A Ford worker visiting from Kansas City

ON THE COMPANIES' GREED

On the strike's first day a woman was seen at the Detroit-Hamtramck Assembly plant wearing a red t-shirt with both the GM and the UAW logos. Its slogan: "Hard Work Equals New Investment."

Apparently not, as GM announced last Thanksgiving that it was allocating no new product to "Dham." Workers are bitter about their years of concessions—followed by demands for more.

We give them almost everything they want except the breath of life and they still want concessions.— Deshaun Willingham, 20 years, Chrysler

They want to get rid of all American workers and pay the least amount possible. That profit was made by us.— Bill Bagwell, 35 years, unit chair UAW Local 174, Customer Care and Aftersale division, Ypsilanti, Michigan

When I call my dad and I tell him what’s going on in here, he always says, "That’s not right." He can’t believe how things have changed.— Melanie Binder, second-tier worker, third-generation GM, Detroit-Hamtramck Assembly

The last week of February when the profit-sharing checks come, we have two workers standing side by side that have done the same job all year long and one gets $11,000 and the other gets nothing. These aren’t workers just filling a 90-day hole so that another worker can go on vacation. They have worked every week for three years non-stop. So they deserve to be compensated just like anyone else.— Michael Herron, UAW Local 1853 chairman at Spring Hill, Tennessee Assembly

We took a lot of concessions when the company needed us. Now they don't want to give nothing back. They're just greedy. [GM CEO] Mary Barra made $22 million a year. My perspective is, do i think she deserves that? Maybe she does. She runs a billion dollar company. But why's she going to not give us anything? We deserve wages as well. We deserve what we should make just like she deserves $22 million a year. If she can justify $22 milion for herself, she can't justify giving us nothing. We're the ones who need health care—98 percent of automotive workers, I guarantee they've got some kind of injury. We just want to have a future. As Tier 2 we almost feel like there's no future for us.— Mitch Fox, 5 years, Romulus Engine

Everyone makes $15. If you've been there 10 years you still make $15.— Karen Cool, Aramark janitor at GM Tech Center, Warren, Michigan. [Aramark workers are also on strike, and the company has hired replacements who are crossing picket lines daily.]

As of April 1 we were put on "new plant status." They told us they can force us 10-12 hours a day, seven days a week. For a year. As of August 12, they told the temps they'd be working seven days, 10-hour shifts. They started doing it that day, not even 24 hours' notice.— Beth Baryo, 5 years, former temp, Customer Care and Aftersales, Burton, Michigan

After the bailout they came back strong, but now they're not remembering how they got strong.— Jeff North, Chrysler

The bigger issue is you're fighting not just for yourself but for future generations.— Maderia Pritchett, 22 years, Detroit-Hamtramck Assembly

I was a temp, I had worked up to $24.50 under the old system. When I was made permanent I had to start over at $14.50. I don't want to pass that on to somebody else. You're less likely to vote against your own kid or your own parent, but GM is counting on us to be desperate. The ratification bonus is just a bribe. I hope they wouldn't fool us three times.— Steve Donagan, Detroit-Hamtramck Assembly, started at GM in 2004 but has seniority date of 2010

What happens to GM happens to us. We are our brother's keeper. My father worked at this plant, I was raised on Local 909 money [Warren Transmission, now closed]. I owe it to the union as part of the labor movement. AT&T has got two tiers and now they're trying to get rid of the tiers because they want everyone to do the work of the lowest tier.— James Dennis, AT&T cable splicer

It’s uplifting because we’re making a stand. We’re not accepting concessions from a company posting billions of dollars of profit. And because we’re all together. There’s safety in numbers. We’re standing up for ourselves in solidarity.— Shawn Edwards, 3 years, Detroit-Hamtramck Assembly

[Speaking of her co-workers:] They were ready. I don't think anybody wants a strike but it comes to a point where we need a strike. The traditional workforce sees the new generation having to struggle and suffer and not see those gains that were made in the past. They understand the need for a strike. If we still want to be a strong middle class we have to explain to GM how you treat us.— Jessie Kelly, former Aramark contract worker, former temp, now a skilled trades apprentice, GM Tech Center, Warren, Michigan

Tier 1 and Tier 2, if we're not equal and fighting for the same thing, there's always going to be more than one battle going on.— Mitch Fox, second-tier worker, 5 years, Romulus Engine

They're fighting for everybody, not just GM. Our fathers and grandfathers and great-grandfathers made it so we could have a living wage. That's eroded over the years.— Doug McIntosh, 25 years, Ford Sterling Stamping, Sterling Heights, Michigan

When GM was on strike for 67 days in 1970 the rest of us paid double union dues to support them.—Lamar Lane, retired Chrysler worker, Dodge Main and Warren Truck, UAW Local 140

If all you have is temps coming up, the union is gone.— Rick Terrell, die engineer, 24 years, Chrysler Tech Center

My Dad opened it, I don't want to be the one to close it.— Mike Mucci, Aramark skilled trades chair at Detroit-Hamtramck Assembly

I’m voting no on any contract proposal that doesn’t give a pathway to equality for every GM UAW member. This is a sacred principle. It is the very meaning of the word union. This opportunity might not come again.— Sean Crawford, second-tier worker, Flint Truck Assembly

Right is right. People are angry in the face of injustice.— Bill Parker, former UAW Local 1700 president, retired from Chrysler in 2018