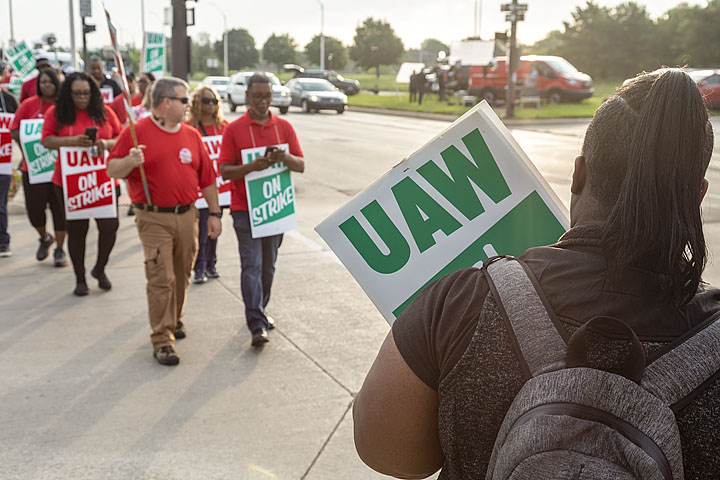 The UAW strike against General Motors is heating up on the picket lines as the stand-off enters its second week. The first week saw union members arrested, presidential candidates march on the lines, and rumors floated that the strike could extend beyond a tentative agreement through the ratification vote. Photo: Jim West/jimwestphoto.com

The UAW strike against General Motors is heating up on the picket lines as the stand-off enters its second week. The first week saw union members arrested, presidential candidates march on the lines, and rumors floated that the strike could extend beyond a tentative agreement through the ratification vote.

Auto workers have yet to receive their $250 a week strike pay, and last week GM canceled the health insurance of all 49,000 strikers without warning. The UAW will use its $750 million strike fund and COBRA to continue most of their coverage—but the company is also feeling the pain.

The investment firm Citigroup estimates that the strike could be costing GM $50 million to $100 million per day, but Kristin Dziczek of the Center for Automotive Research says the costs will amplify as the conflict goes on.

“The costs are like a pyramid, they start off small and get bigger and bigger over time,” said Dziczek. “GM can easily make up the production lost during a short strike, but once you have depleting inventories, are losing revenue in dealerships and the supply chain is impacted, the costs magnify.”

Industry analysts at Cox Automotive have estimated that GM has a 77-day inventory of vehicles.

There have been several reports of police threatening to arrest strikers or taking them into custody for blocking vehicles from entering GM facilities.

On Tuesday of last week, picketing in Burton, Michigan, forced semi-trucks that were potentially carrying parts into an after-market parts distribution center to idle outside, backing up traffic. According to news reports, police handcuffed and detained union members, but no arrests were made.

The next day, following the announcement that GM had canceled their health insurance, nine members of Local 1853, including the president, were arrested for blocking vehicles from entering the sprawling 7.9 million square foot factory, the largest GM facility in North America. On Friday, GM alleged that union members had placed nails in the road to hamper scabs. By Sunday, a Tennessee Chancery Court had issued an injunction prohibiting the union to block anyone entering or exiting the property or to damage their property or GM's.

“The issue we are having is that the company hired twice the number of security and legally we can’t impede traffic so the police escort vehicles through the picket line,” said Jessie Kelly, a member of UAW Local 160 at GM’s Tech Center in Warren, Michigan.

“We have 550 Aramark workers that do sanitation and 'non-strategic' facility work on site that went on strike the day before we did because they haven’t seen a raise in years,” said Kelly.

Aramark janitorial workers top out at $15.18 an hour and are UAW members within the same local.

“GM hired third-party companies to come in and do sanitation and facility work, so we have 120 scabs at our site right now," Kelly said.

The picket lines are being honored by multiple unions, including Teamster car haulers who pick up the vehicles and deliver them to dealerships.

“Our bylaws prevent us from crossing picket lines, but GM had so many additional storage lots that the UAW is struggling to get those shut down and I think they’ve failed for the most part,” said Clay Burgoon, a car hauler of 34 years who lives in Fort Wayne, Indiana.

When the product is stored off-site and there is no picket line, Teamster car haulers are contractually required to pick up the work.

Still, Burgoon said, “There are only so many units and once the units run out the strike impact really takes hold.”

In many plants, some of the skilled trades work performed on site is by union contractors from the building trades, particularly for larger projects.

“When we heard that a strike was coming we prepared, we all took our tools home and told management we wouldn’t be coming in to work if there was a picket line,” said Justin Steenbergh, an Electrical Workers journeyman who was one of about 50 IBEW electricians working in the Tech Center.

“Our union offered us a temporary layoff so we can go back to our contractor once the strike is over,” Steenbergh said. “Three days ago word came down that GM was pressuring our contractors, saying they were in violation of our contract because we were not manning our jobs at GM facilities. I heard they were threatening to sue our contractors.”

Superior Electric Great Lakes Co., a contractor at the Tech Center, refused to comment when asked if GM had pressured the company.

Democratic presidential candidates are showing support for the strikers. Elizabeth Warren, Joe Biden, Amy Klobuchar, and Tim Ryan have all visited picket lines. Bernie Sanders will do the same on Wednesday.

Very visible support from Sanders helped elevate the 2016 Communication Workers' strike against Verizon into a national referendum on corporate greed. If the UAW were to adopt that strategy, the same could be true for the strike against GM, a company that has posted $35 billion in profits over the past three years. Average inflation-adjusted hourly wages of auto workers have fallen by 24 percent since 2002.

The UAW contract technically forbids plant closings, but GM has shut down plants and cut jobs with impunity.

Cynical auto workers believed that GM was holding the 6,000 jobs from these plants hostage to demand further concessions from the American and Canadian unions.

Those suspicions have been vindicated: in the 11th hour before the strike began, GM offered to produce batteries for the company’s electric vehicles (EVs) in Lordstown, site of one of the unallocated plants and where 4,500 autoworkers were once employed.

But there was a catch: these jobs would top out at a rate similar to auto parts suppliers', at about $17 an hour, compared with that of Tier One “legacy” assembly workers, who make about $31.

The UAW set a bad precedent in 2009 when it agreed to set the wage scale from $15 to $17 at a GM plant in Brownstown, Michigan, that assembled batteries for the now discontinued Volt. Now not only does the UAW have to dig itself out of the hole created by a concessionary contract, it must also contend with how an EV future will restructure the industry in a way that cuts jobs.

A UAW white paper from the spring of this year lays out the stakes of the move from combustion to electric engines in stark terms: EVs require fewer parts and fewer jobs to manufacture and many of the parts are now supplied by non-union companies or are imported.

EVs are expected to increase their share of the auto market dramatically over the next few decades, rising to 10 percent in mid-2020 and to over half by 2040. GM has committed to introducing 20 new EVs globally over the next four years.

The UAW wants to ensure that workers don’t shoulder the financial pain or risks of transitioning autos away from fossil fuels, but to date, the union has done little to project a bold vision for the industry or to align its interests and struggles with those of environmentalists fighting for a Green New Deal.

If the union reaches a tentative agreement with the company, the UAW's GM Council can make the call to either end the strike and have workers return to work during the ratification vote, or stay out on strike until the vote is finished. According to the Detroit Free Press, unnamed sources on the Council have indicated that the strike is likely to continue until the pact is ratified, potentially prolonging the time on picket lines by up to a week. Traditionally, the union has ordered members back to work while they vote.

The rumor could be a bargaining ploy by the union: a threat that the UAW can back down from if GM’s offer is good enough. But it could also ensure that the union doesn’t lose the leverage it has built over the course of the strike. If members vote the down the tentative agreement as Chrysler workers did in 2015, they will be in a much better position to extract a better offer from GM if they are still on strike.

With 46,000 workers on strike, why is the "UAW struggling to get [GM storage lots] shut down" so that in the words of a sympathizing car hauler, "they've failed for the most part?" -Marian Swerdlow, NYC