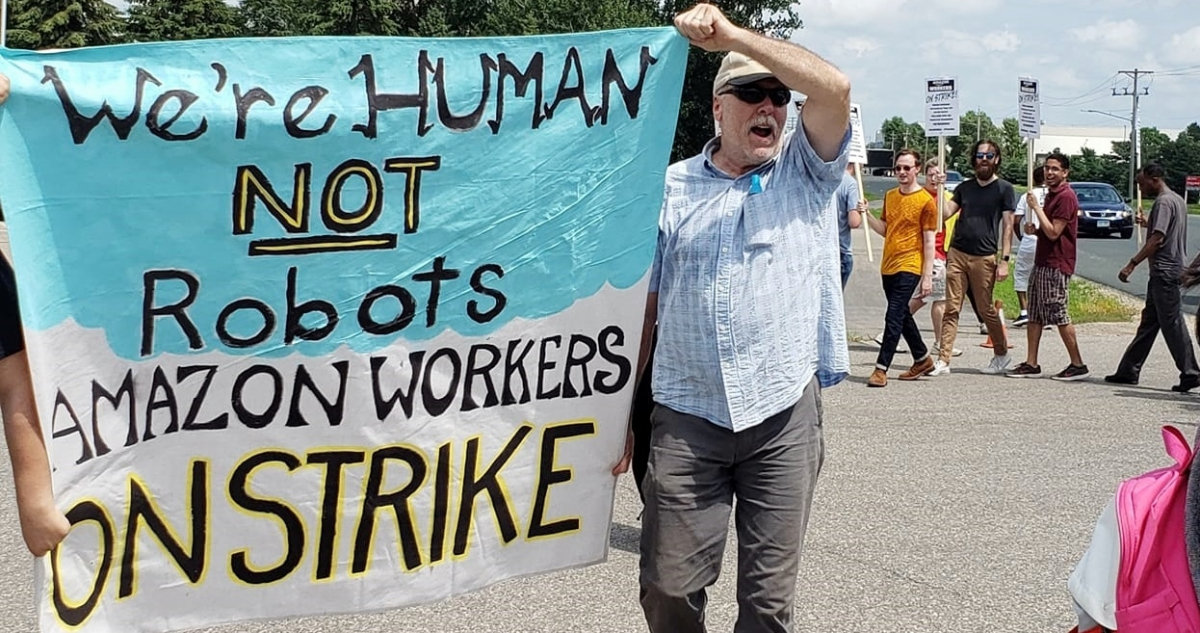 Amazon’s biggest shopping days of 2019 saw walkouts and protests by workers in the U.S. and Germany. Photo: Awood Center

Amazon’s biggest shopping days of 2019 so far—”Prime Days,” July 15-16—saw walkouts and protests by workers in the U.S. and Germany. The protests were semi-coordinated, targeting Amazon when its warehouses are running at full clip and the company is in the media spotlight.

In Germany, Amazon workers organizing with the Ver.di union struck over the course of two days in an ongoing struggle over pay. The union claimed that 2,000 workers participated across seven facilities.

Meanwhile in the U.S., a small group of workers walked out at a fulfillment center near Minneapolis. Others in a Chicago warehouse marched on their boss with demands. Workers and community supporters marched and rallied at two warehouses in Portland, Oregon.

The fulfillment center in Shakopee, a suburb of Minneapolis, has been the site of some of the most confrontational and successful organizing so far. Twice in the past year, Amazon warehouse workers there have walked off the job to protest management’s ever-increasing productivity goals and discrimination against Muslim workers.

Those actions backed by the Awood Center, a worker center based in Minnesota’s East African community, led to the first negotiations between Amazon and a U.S. labor organization. Workers affiliated with the center have organized under the slogan “We Are Humans, Not Robots,” and are also campaigning against retaliation and health and safety problems.

Bolstered by the Minneapolis example, workers in an Amazon delivery center in Chicago on July 16 took Prime Day action of their own. They surveyed co-workers to develop demands, and settled on three: air conditioning, health insurance, and $18 an hour throughout Prime Week.

Thirty workers on the night shift packed the shift manager’s office during a 2:30 a.m. break to deliver the demands. After a lively back and forth, they secured a commitment to meet with the warehouse’s top manager.

“Our goal today was to get a meeting with the person who has the ability to make the decisions around the things that we’re demanding,” said Terry Miller (a pseudonym), who participated in the action. “We knew the best-case scenario was meeting with the site manager, and that’s what we got.” (Read his firsthand account of warehouse conditions here.)

After the meeting, the delegation returned to work and finished out the shift. Workers who hadn’t participated were buzzing about what had happened.

“[Other workers] saw that we were able to make the company pay attention to us,” said Miller, who sorts packages for delivery. “People were asking me questions, catching up with me after the action. It elevated our visibility.”

Delivery centers are the last stop in the Amazon warehouse chain. Items arrive already packaged from facilities further up the supply chain, including fulfillment centers like the one in Minnesota. Workers in delivery centers sort the packages and load them into vans for delivery. These facilities have proliferated in major urban centers as part of the push for one-day and same-day delivery.

Workers in this Chicago warehouse normally make $15 per hour. As an incentive, managers had promised to pay $18 per extra hour worked on top of a regular shift—but the higher rate applied only for the extra hour, not the whole shift.

Many workers are not scheduled for enough hours to qualify for the company’s health insurance.

The warehouse can get intensely hot, since its walls and roof are metal. Amazon publicized that it was installing air conditioning in its fulfillment centers in 2012 after public scrutiny and high-profile incidents, but air conditioners have not been installed in other facilities this one.

At the Minnesota facility, workers walked off the day shift July 15 to join a community picket. Workers said managers and police were staked out at the front of the warehouse, keeping track of who was exiting, which had a chilling effect on participation.

Organizers had hoped that 100 workers would walk out. In the end, far fewer did. Nonetheless, workers and community supporters picketed, danced, and rallied until rain and flash flood warnings ended the action.

Several Amazon tech workers from Seattle flew in to join the rally. They are part of a group called Amazon Employees for Climate Justice, which has organized an open letter signed by 8,000 employees demanding that the company expand its commitment to renewable energy and stop providing technological support for oil and gas extraction.

Also at the rally was at least one member of Teamsters Local 1224, the union of pilots at Atlas Air, which is contracted to transport Amazon goods. Local 1224 has been stalled in contract negotiations with Atlas Air and has been publicly targeting Amazon. In May, members picketed the shareholder meeting.

One focus of the Minnesota walkout was the high rate of injury due to the constant drive for productivity. Amazon maintains an onsite health clinic, AmCare. Workers say the clinic is insufficient to provide for their needs in a workplace rife with health and safety problems.

“Even if I request [a doctor], they will not give it to you,” said Shakopee worker Mohamed Hassan through a translator. “There are no doctors there; there’s not even a nurse there. It’s one of the employees of Amazon who’s there.”

“People are scared to go to AmCare in my facility,” said Kimberly Hatfield-Ybarra, a Dallas Amazon worker who took it upon herself to fly to Minneapolis to support the action. “It’s your first step out the door.”

Amazon’s rising productivity quotas force warehouse workers to choose between their health and keeping up their numbers. Many soon quit over the pressure, or get fired.

“If you can’t go fast enough, how are you going to go to the bathroom?” said Sahro Sharif, an order picker at the Shakopee facility. “If you’re scared of not making rate, I don’t know if you want to take that risk. For older folks, they can’t make rate—they’re more scared to leave their stations.”

Workers in the Chicago facility previously won action to decent drinking water by taking action on the job.

“There were only two to three water stations in the warehouse, which were always dirty and empty,” said Miller. Workers circulated a petition, which got 140 signatures—around a quarter of the workforce—and delivered it during a shift meeting.

The action got quick results. Managers scrambled to purchase and hand out water to everyone on the shift. Within weeks they had installed filtered water systems and distributed water bottles to everyone.

After that victory, the organizers wrote up a statement describing what they had done and how they had won, and distributed it to co-workers on half-sheets of paper. “We got lots of positive feedback,” says Miller. “People started suggesting we push around other issues as well.”

The Chicago organizers took inspiration from the Shakopee walkouts, and they hope to inspire other Amazon workers.

“I would love for others to hear about what we’re doing and take it on themselves,” says Miller. “We’re demonstrating that it can be done, and that people should try something instead of doing nothing.”

Joe DeManuelle-Hall is a staff writer and organizer at Labor Notes.
Related
Mexican Auto Glass Workers Withstand Threats to Form Independent Union »
How My Co-Workers Got Me Reinstated at Amazon's San Bernardino Air Hub »
Non-Compete Agreement Leaves Workers Homeless and Jobless »
Victory Against Polluter Points Way to Clean, Green, and Fully Funded Schools »
Union from The Start (You Don’t Have to Wait) »