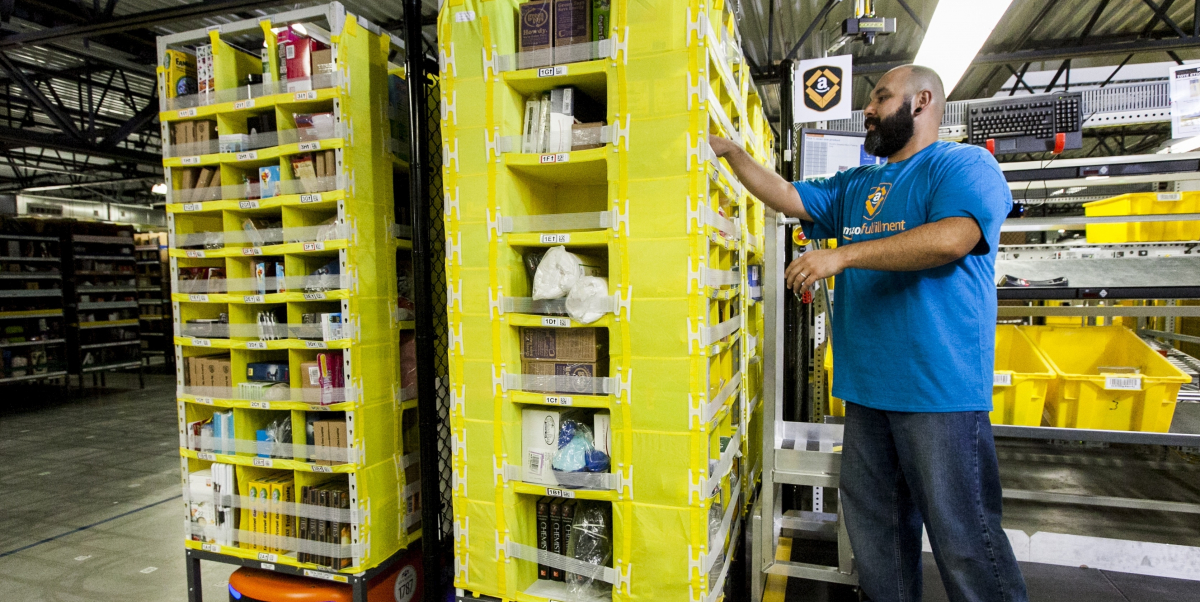 The job is stressful, thirsty, dangerous, and dehumanizing, writes one Amazon warehouse worker. Early this morning 30 workers in a Chicago warehouse marched on their employer to demand air conditioning. Photo: Amazon

Amazon warehouse and tech workers around the country took action, including a strike in Minnesota, during the company’s much-hyped annual “Prime Day” discount frenzy July 15-16. Read more about those actions here. Here one warehouse worker from Chicago describes conditions on the job. Thirty night shift workers in his warehouse marched on their boss early this morning to demand air conditioning, health insurance, and Prime Week pay increases. –Editors

Crises are frequent. During my second week, a woman passed out from dehydration while working. The area manager never even stepped down from his platform while emergency medical personnel helped her into an ambulance.

For months there were no bottles of water in the refrigerators most days. The water stations were frequently empty and always dirty. (These sentences are in the past tense because the author and other workers in this warehouse organized a petition that got the employer to start providing clean water more consistently. –Editors) There’s still no air conditioning in the main work area, where it gets incredibly hot and humid.

We’re ordered to work at such a high pace that we hurt our backs and knees trying to keep up. During my third week I was unloading a truck with a co-worker. “We’ve got to move fast or else they’ll yell at us,” he told me as he pulled down a tightly packed layer of boxes seven feet high.

The wall of boxes came crashing down, and—you can’t make this stuff up—a box marked with a “heavy” sticker hit him square in the groin. He keeled over for several seconds, then got back up and limped over to continue moving boxes despite the pain.

The restroom facilities are insufficient and have been constantly out of order, forcing us to use PortaPotties as if we were working at an outdoor concert eight hours a day. And only after a fire started in June did the managers realize that most of the workers in our warehouse had never had a fire drill, nor had we ever been given instructions on what to do in the case of a fire.

“They don’t care about us,” said my co-worker (let’s call her Ida), pulling packages from the conveyor belt across from me.

I had just asked for water a second time, while working a station that I was not allowed to leave—moving fast to catch all my assigned boxes from the endless flow coming down the belt. It was hot, and I was thirsty. I had asked for water almost an hour ago. The supervisor said she was getting some, but never did.

“But I’m just asking for some water,” I said.

Ida had been working at this warehouse for nearly two years, longer than almost anyone still here. I was barely three months on the job—but already, out of 20 people hired the same day as me, fewer than five of us remained.

Ida was right. I had seen it my second day of work. I was assigned to sort packages in a tight space between rows of shelves, called “cells.”

I had been in the cell for barely five minutes, and was trying to figure out how to get my equipment to work, when I heard a voice come on a nearby radio: “You have someone two cells down that isn’t working.”

A supervisor poked her head into my cell and asked what was wrong. I explained that my equipment was broken. The radio crackled again: “Are they going to scan 250 packages an hour today? No more excuses. Get them back to work.” This is a common response from managers when they have issues with our work. Frequently they do not provide any helpful or rational solutions—they simply yell at us to work faster and harder.

While walking from the cell to get functioning equipment, I looked up and saw where the radio voice had originated: an elevated platform 30 feet off the ground where a manager stood scanning the entire warehouse floor, radioing down to supervisors on the ground to yell at us to make us work faster.

The “plantation overseer” effect is intensified by the fact that over 90 percent of the workers at this warehouse are Black and Latino, while most of the top managers are white.

We workers are the ones who make these warehouses function to get all the Amazon customers their packages in two days or less. We know what we need in order to do this work with dignity and without hurting ourselves, and we know what we deserve.

Amazon tries to placate us with the occasional pizza party, candy, popsicles, “swag bucks” that can only be used for Amazon-branded apparel, little contests for prizes, and juvenile antics like “wear wacky socks day.” But we are not children to be manipulated with token prizes and activities. We have our own children to feed and bills to pay.

Terry Miller is the pseudonym of a worker in the Delivery Station DCH1 Amazon warehouse in Chicago. He is not using his real name for fear of retaliation from management for speaking out about conditions.

Over the last few weeks I’ve been talking with co-workers who will also be taking action during Prime Week:

Here are a few of their perspectives.

Why are you taking action during Prime Week?

Grace: You get tired of asking for the same thing and not being heard.

Kourtney: We are walking because we need more pay.

Victoria: To demand improvements in our workplace; to be able to work without having to worry about not my co-workers’ safety, or whether we’ll be fired over something that is not our fault.

What are you doing to make things better at our warehouse?

Grace: I was new at one point at Amazon and I have learned to find my voice. To the people that are just coming in, I have made sure to reach out to them if they need any help or have any questions. It’s easier to find a co-worker to help you than it is to find an ambassador or a supervisor.

Kourtney: I made a survey to see what co-workers care about. We are coming together as a team to do better for everyone and listening to everyone’s concerns.

Victoria: Time and time again we’ve brought these issues to our management team and saw no changes for months. I talked to several co-workers and asked them what else can be done. We began to hang out and would talk about the many issues we face. We soon realized that we were all experiencing similar problems, and decided to take action together to solve them.

What’s your message to other workers, especially warehouse workers around the country?

Grace: You have to learn to speak up and not be afraid to say what’s on your mind. When one person starts to speak up or question them, then it opens the door for more people to start doing the same.

Kourtney: Don’t overwork yourself, if you feel undervalued.

Victoria: Don’t be afraid! Just because we are warehouse workers, we shouldn’t be stepped on so easily.

Grace: You would think that working at Amazon would be a great experience, but instead you learn how poorly people are being treated. People at Amazon are overworked, underpaid, and unappreciated for the work they do.

The work takes a toll on your body after only a couple of days. You get pushed so hard, and you don’t feel like you have time to even get water or go use the restroom because your score will drop or you will be marked “time off task.”

I don’t think that Amazon has figured out how to respect their workers, but they want you to respect them, and that’s not how it works.

Kourtney: The more we do together, the more we should see change.

Victoria: Fight for your worker rights! Unite with co-workers and talk out what you can do to bring solutions to the problems and issues you face.