The National Labor Relations Board has ruled to postpone a planned union election vote at Volkswagen's factory in Chattanooga, Tennessee, where plant management spent the week waging war against union supporters.

In an unexpected victory for Volkswagen, the company has evaded another plantwide union election thanks to a ruling from the Republican-dominated Labor Board. The election, petitioned for by the Auto Workers (UAW) on April 9, has been put off indefinitely.

Meanwhile, workers at the German automaker's sole U.S. plant in Chattanooga have been facing escalating pressure from their employer.

Materials obtained by Labor Notes reveal the company engaging in scorched earth anti-union tactics that are commonly deployed by U.S. employers, marking a sharp shift from the company’s past claims of “neutrality” towards unions.

The UAW faced similar opposition during the 2017 election at Nissan in Canton, Mississippi. Both Nissan and Volkswagen have relied on the services of notorious union-busting law firm Littler Mendelson. One of Trump's two appointees to the Labor Board, William Emanuel, was a partner at the firm, though he did not rule on the Volkswagen case. Instead, postponing the election at the company's request was the work of two of Emanuel's Republican colleagues.

On Wednesday, the company released a letter signed by Volkswagen CEO Antonio Pinto stating that “employees have been victim of extremely distasteful bullying” and “employees are being followed to their homes and confronted about their views.”

Pinto’s letter was featured in the company’s newsletter, “JumpStart,” which is given to employees every day. 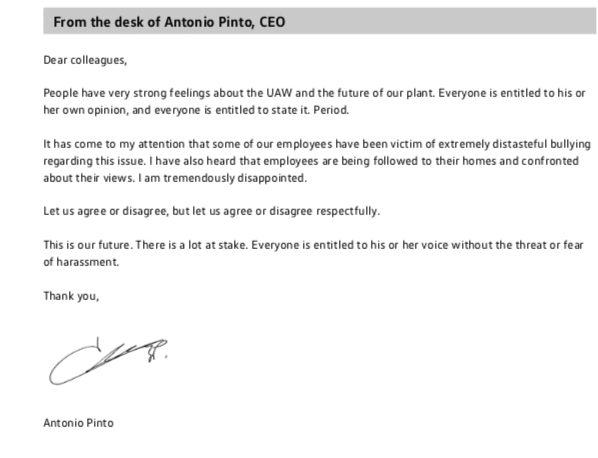 The union refrained from house visits as part of the agreement it struck with the company in the lead up to the 2014 union election. In exchange, Volkswagen agreed to remain neutral and even provided opportunities for UAW organizers to have access to workers in the plant. The UAW narrowly lost that election following a firestorm of interference from outside groups. This time around however, the union is doing house visits.

The letter is a clear attempt by the company to create a climate of fear and tension around union organizers visiting workers at their home.

“It’s an attack by insinuation, I’ve seen it lots of times,” said retired union lawyer Gay Semel. “An anti-union worker complaining that somebody rings their bell or calls them up is not a threat, that’s the union trying to talk to workers because it doesn’t have access to the workplace.”

Such house visits are a component of almost every union organizing campaign.

While the boss has unfettered access to workers and can require employees to attend mandatory meetings and listen to anti-union talking points, unions enjoy no similar benefit. Organizers are not allowed access to workers on the job, so they often try to visit them at home to talk through the benefits of unionization, answer questions, and shore up support.

“That letter happens in every contentious campaign,” said Kate Bronfenbrenner, director of labor education research at Cornell University and author of No Holds Barred: The Intensification of Employer Opposition to Organizing. “Employers send out leaflets like that whenever they are worried that unions are winning.”

On Monday, the company invited Tennessee Governor Bill Lee to deliver an anti-union speech that the entire day shift was required to attend. The media was barred from attending, but Labor Notes obtained a recording of Lee’s remarks, in which he said he favored a “direct relationship” between workers and bosses—that is, no union.

The governor’s comment solicited a raucous reaction of both boos and cheers, reflecting the divisions in the plant.

In the days following the governor’s visit, supervisors were set loose in the plant to drill anti-union talking points into employees. They also handed out anti-UAW flyers that insinuate a vote for the union is a vote to shut down the plant.

“We meet with our supervisors at the beginning of every shift, where they read anti-union propaganda,” said a worker who did not wish to be identified. “They had 30-minute meetings on Thursday and Friday.”

On Thursday, workers were read from a flyer that attempted to link the UAW to multiple plant closings, with the implied threat that the same could happen in Chattanooga. 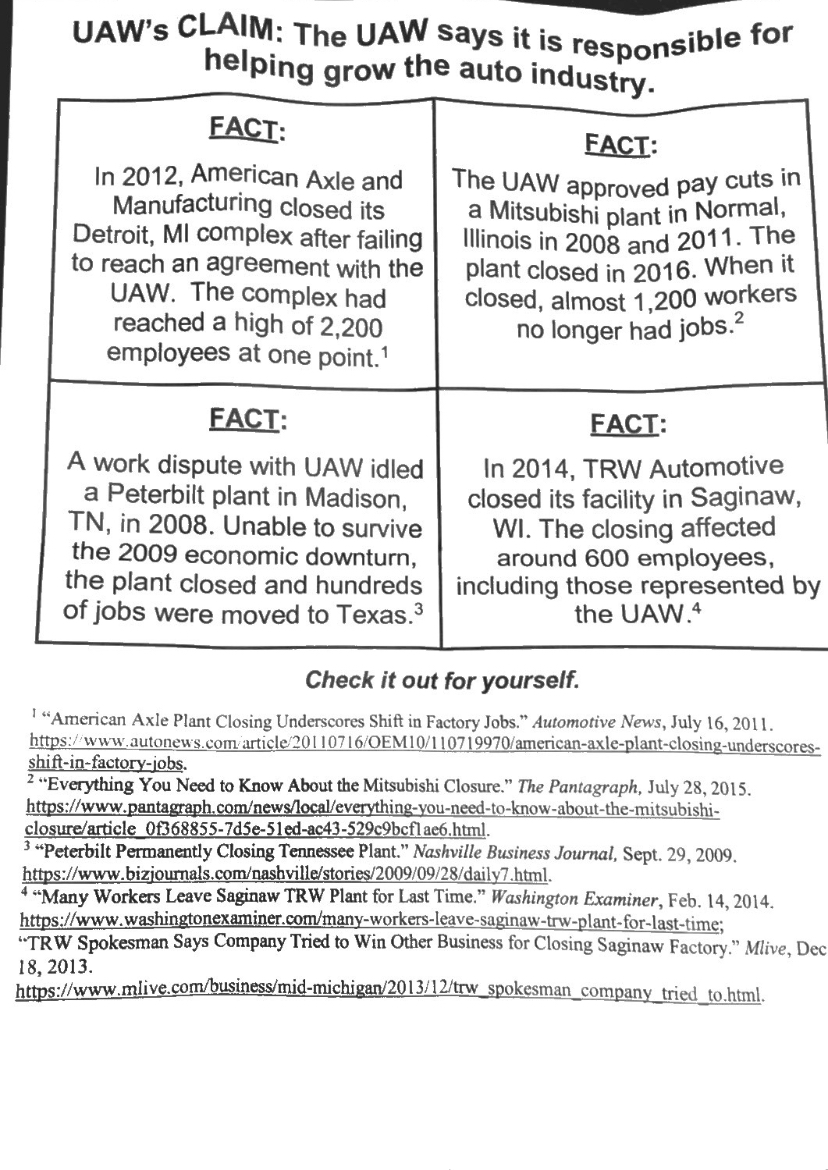 “Based on my research, threats of plant closings happen in 70 percent of manufacturing facilities where there’s a union drive,” said Bronfenbrenner. “These kinds of threats are routine.”

This morning, supervisors read from a flyer warning that if employees unionize, they could “lose wages and benefits” such as the lease program. Employees are able to lease new automobiles at rates below those provided to car dealers. 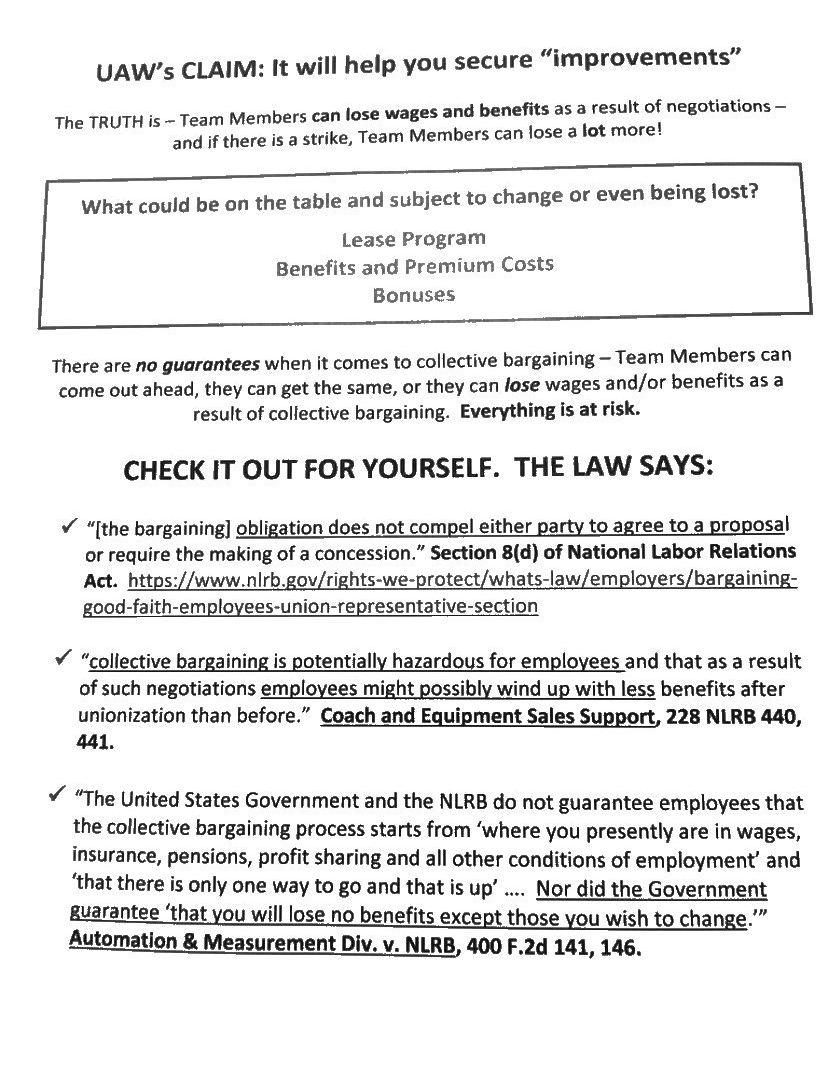 “This is standard in many union drives,” said Semel. “They are trying to imply that unionization is futile. In my 30-plus years as a union-side lawyer, I’ve never seen collective bargaining lead to people getting worse terms and conditions of employment in a first contract.”

According to Semel, all these tactics come down to one simple word: power.

“Employers in this country have never accepted the fact that workers have rights because they don’t want to give up their total control over the workplace,” said Semel. “When workers unionize they have a voice, so the employer will do everything in their power, including lying, misrepresenting the facts, and scaring people to keep them from voting union.”

While the company is escalating the anti-union pressure inside the plant, they are receiving assistance on the outside from a constellation of corporate front groups.

The Center for Union Facts, a Washington, D.C.-based anti-union public relations firm, is running video ads attacking the UAW on social media, in addition to the full-page ad it bought in the Chattanooga Times Free Press. The firm has also launched a website focusing on the union’s corruptions scandal, penned editorials, and purchased billboards in Chattanooga.

Local union-buster Maury Nicely of the Chattanooga law firm Evans Harrison Hackett has revived Southern Momentum, a business-financed astroturf group that claims to represent workers in the plant. A few Volkswagen workers are Southern Momentum supporters and have been handing out anti-UAW materials in the parking lot before work.

The cumulative effect is a climate of heightened fear, uncertainty, and doubt among the Volkswagen workforce.

Bronfenbrenner says that’s the goal of any anti-union campaign. “Workers are showing up to work in an environment where they are meeting with their supervisors and are being threatened and interrogated and then they leave the plant and go home to see anti-union commercials and get anti-union letters,” she said. “It’s an unrelenting stream. Workers just feel battered.”

Despite that, workers are fighting back. In addition to the boos during the governor’s speech on Monday, workers say they’re pushing back against management on the shop floor.

“We shut our supervisor down this morning,” said one assembly line worker. “We just argued with him. He tried to argue back but got flustered and then changed the subject.”

Prior to the NLRB ruling this afternoon, a vote had been expected to take place later this month.