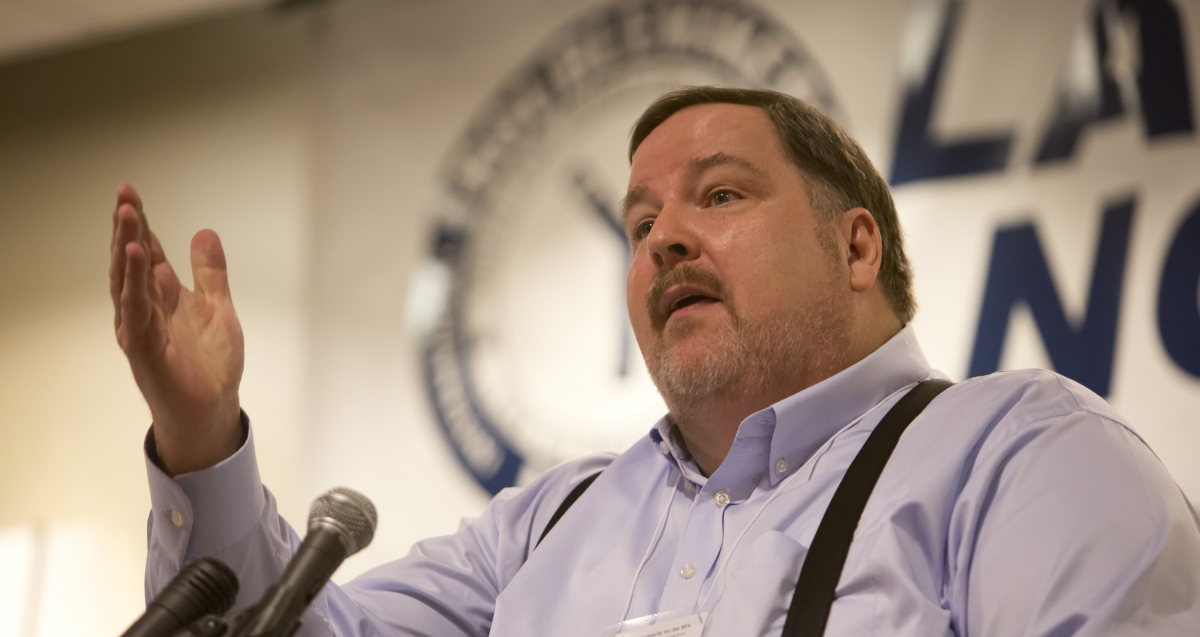 “How many more funerals do we have to have before we put a stop to assaults on bus drivers?” Larry Hanley asked in 1978. “Managers show up at every funeral with boxes of Kleenex, and then do nothing until the next funeral.”

Larry said this a thousand times between 1978—when he went to work driving a city bus in Brooklyn—and his last Amalgamated Transit Union General Executive Board meeting this spring.

While he was still a rookie, Larry learned that managers weren’t the only ones unwilling to address the issue in a serious way. He found little support from the police, the media, and even his own union.

He realized it was up to him to protect himself and his co-workers on the job he loved. And he determined that the only way to confront the issue effectively was to organize in his union for a fight.

As Larry rose from shop steward to president of ATU Local 726 on Staten Island, New York, he was increasingly admired by union members and grudgingly respected by the Metropolitan Transit Authority, city officials, and many union leaders.

Larry’s exploits on Staten Island are legendary. The campaign he led to reduce fares on express buses to Manhattan, which was accomplished by uniting passengers and drivers, generated big improvements in service and increases in ridership. In the process it also increased the membership and power of Local 726. The lessons of that struggle and the organizing model it exemplified are detailed in the Labor Notes book A Troublemaker’s Handbook 2 and remain an essential study for unions everywhere.

Larry found out the hard way that the Democratic Party isn’t labor’s friend, when he led a campaign that won a working people’s majority on the Staten Island Democratic Committee but was subsequently crushed by the state Democratic Party.

Partly as a result of that treachery, Larry went on to co-found the Working Families Party. Working people’s need for a political voice independent of the parties of big business remained a guiding principle for him till the end.

ATU’s international leaders at the time were wary of what they saw as Larry’s “radical” ideas and tactics, but they couldn’t help appreciating the results that he and Local 726 achieved.

So even though Larry was a spectacular pain in the ass to the union leadership as well as to powerful interests in New York City that the ATU International didn’t want to disturb, he was appointed to the position of ATU international representative—possibly partly to get him out of town and turn the local over to someone less troublesome.

When Larry became an international vice president, he continued without hesitation to make ATU leaders uncomfortable by arguing for organizing members and building coalitions, the way he had shown how to do it in New York. Even though privatization was rearing its ugly head and eroding the hard-won standards of transit workers around the country, the leadership remained unmoved,

So Larry set out to change the leadership. His campaign was reported on in Labor Notes in 2010.

The leaders of organized labor in general and ATU in particular back then appeared to be trying to live up to the reputation given to labor by industry bosses and their media—an undemocratic, self-perpetuating, corrupt enterprise with no ability to combat widespread losses of pensions, health care, and wages.

Challenging the top leaders of ATU was unheard-of. Nevertheless, Larry organized a successful campaign and won an exuberantly uplifting victory that raised the hopes and aspirations of transit workers across North America.

The restructuring that Larry undertook in ATU should be studied by workers seeking to transform their own organizations.

To confront the onslaught of attacks on public transit workers, Larry continually worked to inspire and cajole the ATU board to organize and train members to take escalating actions to defend their rights and conditions. He decried what he saw as our willingness to compromise on important issues that adversely affect transit workers. For instance, negotiating 401(k) plans with no mandatory employer contribution made him angry. And he hated to see substandard health plans that were too costly for most workers to afford but that gave companies cover by allowing them to say they offered health coverage.

He often became emotional as he spoke of the casualties of our collective failures. He brought in family members of victims of bus driver fatigue to instill in us the life-and-death consequences of failing to take action against employers who force drivers to work when fatigued.

Health and safety on the job were at the top of Larry’s concerns. He persuaded us to lead campaigns around fighting unsafe practices at maintenance facilities, transforming drivers’ workstations to avoid the health issues that are currently common, providing shields to protect drivers from assault, changing mirrors and bus design so drivers can see pedestrians, and demanding the basic human right to use bathroom facilities at work.

He argued passionately that we place ATU members at risk of unbearably declining living standards if we negotiate contracts that don’t provide the best wages, health insurance, and retirement security. He complained that our view of the strike is a memory, not a weapon.

A current campaign that Larry pushed with his usual forcefulness was to win a decent contract for bus drivers on Martha’s Vineyard. The unimaginably wide disparity in wealth on the island offended Larry tremendously. He wanted us to launch a campaign to rename the island “Poverty, Massachusetts.”

Even though the transit agency is very small and the authority has been successful for many years in suppressing union organizing efforts, Larry saw the struggle of the drivers there as a social justice issue, and he was willing to put as many resources as necessary into their fight to assure victory.

With Larry at the helm, ATU began to be referred to as a progressive union. (To Larry, “union” was supposed to be the definition of “progressive.”) He understood that unions have to lead on issues like climate change, and that organizing to defend and expand public transit is a critical part of that effort.

ATU also went from supporting U.S. militarism to working with U.S. Labor Against the War and opposing the war-for-profit regime. As Larry put it, “The U.S. has plenty of money to blow up farmers on the other side of the world, but we don’t have enough money to provide decent work for half of our own population.”

Presiding over his final board meeting, Larry became emotional as he exhorted us to work more forcefully to organize our members to organize our riders and our communities to engage fully in the struggle against inequality.

“How can you wake up in the morning knowing you represent hard-working men and women who don’t have the right to go to the bathroom,” he asked, “unless your plan for the day is to organize a fight to fix it?”

Larry set a very high bar. Who among us will attempt the vault?

Bruce Hamilton is an international vice president of ATU.

Related
What Today's Union Reformers Can Learn from Miners for Democracy »
Frustrated Over Contract, Locomotive Engineers Vote to Oust President »
Rail Machinist Opens Bid for District Presidency »
A Life in Transit: ‘What You Can Get Is Set by How Far You Are Prepared to Go’ »
Texas Union Activists Fight 'Microtransit' Privatization »