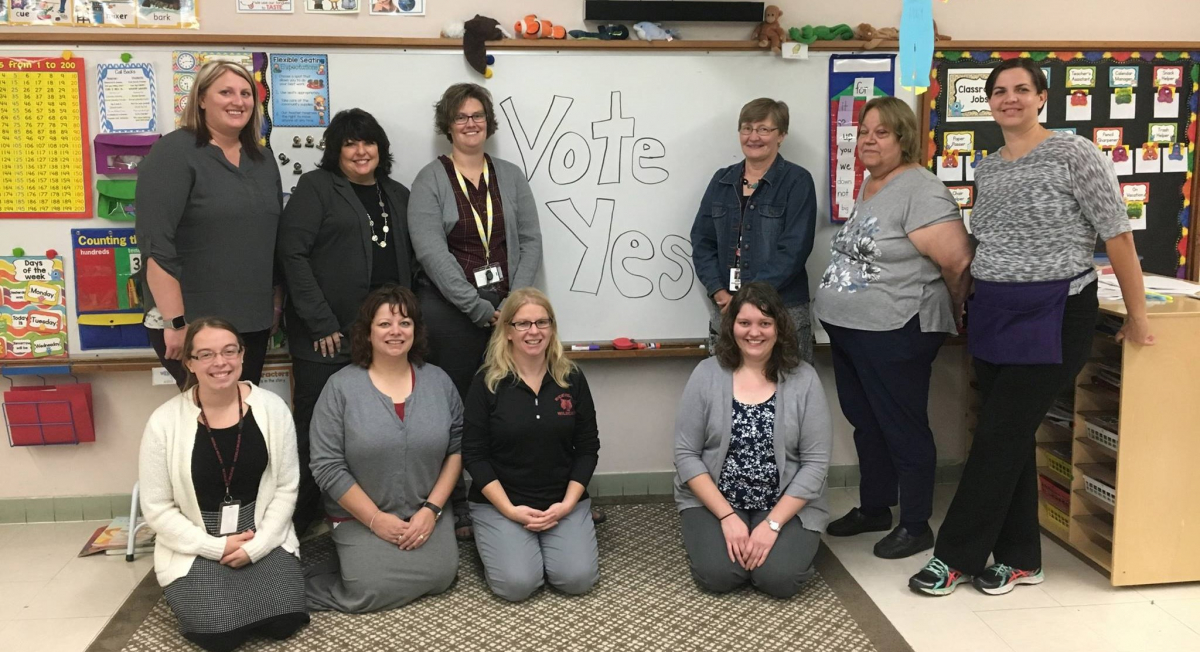 Never let a good crisis go to waste. Iowa’s Republican legislative majorities assumed that an aggressive anti-union law would persuade public employees to abandon their unions. Instead they created a backlash, sparking unions to reconnect with members and their communities.

House File 291, passed in February, defangs public sector bargaining and requires a vote, one year before the contract expires, on whether members still want a union at all. The union pays for this election—an anti-union tax set at $1 per member this year, which can be increased at the whim of Iowa’s labor board.

The kicker is, the union must win a majority of all eligible voters, not just of votes cast. Even if nobody votes no, but half the members don’t vote, the union will be decertified. Unions have pointed out that none of the law’s backers could win reelection under these skewed terms.

The law also eliminates public sector unions’ right to collect dues through payroll deduction. And unions can no longer negotiate over insurance, hours of work, professional development, or retirement benefits.

A similar law in Wisconsin, Scott Walker’s infamous Act 10, has decimated public sector unions. Most of the Wisconsin bargaining units that decertified right off the bat in 2011 had a majority of voters opting to keep the union—they just couldn’t get a majority to cast ballots.

But so far Iowa unions are avoiding a similar fate. The first elections, conducted by mail in September, covered 13 locals of the Iowa State Education Association. They all chose to remain union, by extraordinary margins.

In the second round, conducted electronically and by phone in October, only four out of 220 ISEA locals—fewer than 2 percent—didn’t make the cut. Among other unions, including AFSCME, the Teamsters, and the Electrical Workers (UE), 86 percent of locals were recertified.

One of the first locals to vote on recertification was the West Lyon Education Association, in the far northwestern corner of the state. Eleven months ago, 81 percent of Lyon County voted for Donald Trump.

When the recertification vote was announced, many West Lyon members were confused. So the union put sample ballots on all its bulletin boards, explaining how the voting worked and what it meant, and ran open meetings before and after school. The message: If not us, who else will stand up for our benefits, our profession, and our students?

Sixty-nine of the 71 teachers in West Lyon voted to keep their union. “They value our contract,” said President Shane Peterson. The West Lyon teachers have great insurance benefits—family coverage, with the employer paying the whole premium—and the threat to those benefits was a strong motivator.

In Fairfield, “our flyers said, ‘Don’t wake up on October 25 [the day after voting ended] and have no benefits,’” said Fairfield middle school math teacher Lisa Greenig. Even without the legal right to negotiate over most subjects, she said, teachers know “only the Association will fight” to protect their rights.

The Fairfield local expected yes votes from 129 out of 130 eligible teachers. Those numbers were nearly spot-on: the union won 121-6, with one void ballot.

The ISEA isn’t extraordinarily powerful. If it can win recertification votes, so can other unions. Locals are using every possible method to get people to vote, including social media (#voteyesIA)—but they’re doing the heavy lifting through face-to-face organizing. Their approach is based on relationships and talking about power.

Leaders have found they don’t need to convince members to vote yes. They just have to make sure they remember to vote.

“I go up to someone before school and ask, ‘Have you voted yet?’” said Kristen Septer, a high school science teacher in Fairfield. She would follow up after school, and again the next day before and after school, until the teacher confirmed it.

Success was less about the message than who was delivering it. Septer was able to approach those teachers because of relationships she had established over years of working together.

As Nick Covington of Ankeny put it, there’s a strong “measure of trust” between his union and its members. Most building reps became reps because they were already “the people folks looked to for help”—genuine leaders in the workplace.

The same was true in local after local. Leaders felt that these elections were won not during a few weeks of voting, but long before, by recruiting the right leaders and earning members’ trust. It’s “a culture we’ve built over the years,” said Amy DeGroot-Hammer, a counselor and driver education teacher in Sioux Falls.

ISEA has chosen not to panic. Unlike Wisconsin, where Act 10 came as a shock, Iowa was never a particularly union-friendly state. Public sector unions already had limited bargaining rights and no “fair share” fees.

So the teachers I talked to weren’t particularly alarmed. Their attitude was that the union has always been under attack—and they’ve never let those attacks get them down. They simply took the steps required to leap over the latest hurdle.

How did the activists keep count? In West Lyon, which has just one school, Shane Peterson and his team hit upon a simple method. “We asked people to vote, seal up their ballot according to the instructions, and bring it to school,” he said. Then the ballots were mailed together. Sixty-five of the 71 teachers brought in their sealed ballots—creating solidarity out of an activity that was surely intended to isolate workers.

In Ankeny, with 16 schools and 785 people, local officers and building representatives had to divide up their labor. They created a Google spreadsheet with color coding to show whether each person had already voted, promised to vote yes, planned to vote no, or hadn’t been contacted yet.

Unions are often unwilling to let rank-and-file leaders have access to databases, but the shared spreadsheet paid off. It helped the building reps avoid duplicating their efforts—and when one ran into trouble with a particular teacher, another could see that person needed extra attention and follow up.

Voting started on a Tuesday morning. By Friday afternoon, 75 percent had voted, with a solid majority confirmed as yes votes. Some schools had 100 percent voting. Ankeny’s final results: 676-15.

In the few districts where the union was decertified, teachers will still have non-bargaining locals and support from ISEA to advocate for better working conditions. “The places we don’t get,” said President Tammy Wawro, a fifth-grade teacher, “we’re not leaving.”

Given the new legal limits on bargaining, Iowa unions are asking parents, local businesses, and community members to help them win on issues formerly resolved in negotiations. For the first time, many locals put serious work into school board races this fall.

Many have also drawn on the union’s community service grants program to fund volunteer projects. One local works with a shelter for victims of human trafficking, teaching life skills and donating supplies. Another raises funds for college scholarships for local high school grads who want to become teachers.

Such efforts drive home the point that “we are in this community,” DeGroot-Hammer says. “We make a difference. We care about your kids.”

Dave Kamper is an organizer in Minnesota and a member of Auto Workers Local 1981 and OPEIU Local 12.