Why Did Nissan Workers Vote No? 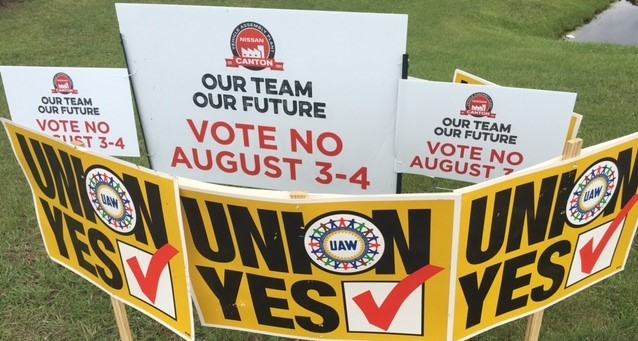 Workers voted 2,244-1,307 against joining the United Auto Workers, after a 12-year campaign to organize the mile-long Nissan plant in Canton, Mississippi.

There's no sugar-coating a loss this dramatic: 2,244-1,307 against the United Auto Workers, after a 12-year campaign to organize the mile-long Nissan plant in Canton, Mississippi.

After four attempts, the UAW has yet to win a plant-wide vote at a foreign-owned auto plant in the South.

The August 4 loss can be laid to three factors: Nissan's fierce anti-union campaign, the union's failure to build a strong organizing committee that acted like a union on the shop floor, and Nissan workers' reluctance to rock the boat and risk losing a job that pays far higher than they could expect to make almost anywhere else.

UAW strategists felt that the demographics were in their favor, since 80 percent of the Nissan workforce is Black. Data shows that Black workers are more likely to vote for a union than are their white counterparts.

But they also had to contend with the fact that Nissan brought well-paid jobs to an area with very few. Even though Nissan workers make less than workers at the Big Three automakers, they still take home some of the highest blue-collar wages in the state.

“People drive two hours to get to this plant because they’ve never had a job like this before,” said Robert Hathorn, a pro-union frame worker. Hathorn started as a temp four years ago, but became a direct Nissan employee through the company’s “Pathway” program.

“Pathways” are paid more than temps, but receive lower wages and fewer benefits than the “legacy” workers, who were hired directly by Nissan when the plant first opened in 2003. The UAW was counting on Pathways workers’ frustrations at their second-tier status to put them over the top.

But many workers did not support the union out of fear of losing what they had, said Bianca Cunningham, an organizer with the Communications Workers who volunteered on the campaign.

“I spoke to so many workers who say, ‘I lived in a mobile home with my wife and kids and now I work at Nissan and have a house and land and my life is better,'” she said. “'They gave me a shot and now I will give them a shot to change.' That was true regardless of race.”

Nissan leases cars to employees with no credit application at below-market rates. The word was out that a union would mean the end of that program (although it could have been included in a union contract).

Workers faced down an anti-union trifecta: Nissan, the Mississippi political establishment, and outside business advocacy groups all joined in the anti-union crusade.

In the lead-up to the election, the National Labor Relations Board filed a complaint against Nissan, detailing years of illegal threats made by the company against pro-union employees. The complaint alleges that Nissan supervisors told workers in one-on-one and small group meetings that the company could shut down the plant if it went union.

“Those scared a lot of card signers away,” said Chip Wells, a maintenance worker who hired on shortly after the plant opened 14 years ago. For years he was active in the union's organizing committee. Days before the election, he publicly changed his position.

Wells says he switched under pressure from anti-union co-workers, a decision he now regrets.

The in-plant pressure was intense, with anti-union videos playing on a continuous loop. “Management and even people who work at the plant but don’t work for Nissan were wearing 'vote no' shirts,” Wells said.

Managers and HR reps held captive-audience meetings of 20 to 25 workers.

Wells described one meeting: “They had a three-bag demonstration: one bag said ‘Nissan’ and another said ‘Employee’ and another said ‘Union.’ They said that Nissan comes to the table with everything in their bag, and the employees come and get some from the Nissan bag. The union comes empty and has to fill up its bag from the employee bag.”

When workers clocked out they were inundated with more anti-union messages.

The Mississippi Chamber of Commerce and the National Association of Manufacturers saturated local media with ads. The state's chapter of Americans for Prosperity, financed by the billionaire Koch brothers, got involved, sending 25,000 mailers to area residents and producing videos and radio ads that painted an apocalyptic picture of Mississippi’s future should Nissan workers vote union.

Governor Phil Bryant stated the week before the vote: "If you want to take away your job, if you want to end manufacturing as we know it in Mississippi, just start expanding unions."

“You ever heard of telepathic power? It was like that,” said Hathorn. “It was overwhelming. They were in our heads 24-7.”

After a similar experience with a failed vote at the Volkswagen plant in Chattanooga, Tennessee, three years ago, the UAW must have known that Mississippi business and politicians would not be any less hostile.

The UAW had tried to convince Nissan to remain neutral, as Volkswagen had. Last year, the union hosted Christian Hutin, a member of France’s National Assembly, on a fact-finding mission to hear from workers about the anti-union intimidation they faced. The French government is the largest shareholder in Renault, which owns 43 percent of Nissan’s shares. It doesn't appear that the French government took any useful action.

The union's community campaign—"Worker Rights Are Civil Rights"—brought in high-profile speakers: Senator Bernie Sanders and actor Danny Glover. But when preachers and civil rights leaders asked Nissan for a meeting to discuss a "fair and free" election, the company didn't respond.

“This is what aggressive anti-union campaigns look like. Nissan isn’t going to back off an aggressive anti-union campaign just because you say they are racist,” said Kate Bronfenbrenner, a labor researcher at Cornell University and co-author of Blueprint for Change: A National Assessment of Winning Union Organizing Strategies. “You have to organize a campaign for neutrality that raises the cost of fighting the union higher than the cost of settling with the union.”

The UAW had made generous donations to Canton community organizations over the years. Nissan in response made the claim, as Hathorn puts it, that “the UAW was paying off the preachers and supporters. All the antis jumped on this.”

Nissan never agreed to neutrality and the UAW eventually pushed forward with an election.

By workers' accounts, the union was not ready.

For one thing, the organizing committee was too small and lacked a presence in some departments and shifts.

“We couldn’t cover everybody in the plant because the committee wasn’t big enough and there were a lot of people on the committee that were not active like they were supposed to be,” said Jeremy Holmes, a trim department worker who was on the committee since he began at Canton six years ago. “Probably only about half were doing the work that needed to get done.”

INSIDE THE WAR ZONE

Nissan technician Robert Hathorn was still a temp when he got involved in the union drive. He was on the community outreach committee, speaking to outside groups as well as organizing his area in the plant. He talks about the atmosphere leading up to the vote:

What Nissan did was they caused division between the employees.

You see how the Trump and Hillary campaign went. Same thing here. People were fighting over this election. Nissan opened boxes with hundreds of Vote No shirts. They put them in a huge pile and told workers they were free to take. Everyone started wearing these shirts.

This anti would stand outside the turnstiles with a bullhorn and shout “Nissan is the giver of life,” and he wakes up every morning and gives thanks to Nissan because they gave him a chance. It was crazy.

I would go to work and get in that shift meeting; a message comes on the [in-plant] TV about voting no to the UAW. Then the manager says something, then I go to the break room and there are slides slandering the UAW.

Then you get ready to leave and they hand out literature about voting against the union. I leave work and up and down the highway you see Vote No signs. You see billboards talking about “our team, our future,” you get home and you get brochures in the mail, you turn on the television and there it was again. Every time you turn on social media it’s there.

It was overwhelming. That had to get to people.

Committee members say they never had an accurate count of who was a Nissan employee and who wasn't until the company gave the union a required list a few weeks before the vote.

Figuring out who’s who is complicated at Nissan. Temporary workers employed by Kelly Services and other agencies account for as much as 40 percent of the 6,400 workers. Many temps perform the same jobs, but for less pay and fewer benefits, as workers directly employed by Nissan.

“Everyone in the plant is wearing Nissan shirts and there are so many people working for secondary companies that you wouldn’t know who worked for who if you couldn’t ask them,” Holmes said.

In organizing drives, committee members and organizers have one-on-one conversations with every eligible voter, assessing them for their pro- or anti-union sentiments.

According to multiple organizing committee members and campaign volunteers, on the day of the election there were still more than 600 workers who had never been assessed by the union.

“Nissan reached everybody. If we didn’t reach them, then they voted after only hearing what Nissan had to say about the union,” said Holmes.

“We filed with not even half [the workers signing union cards],” said Hathorn, who was on the committee for two years. “I would have waited until we had 65 percent of the cards signed up. I think we filed because this campaign had just been going on for so long.”

Just as important, the UAW limited its campaign to talking union rather than acting union. Bronfenbrenner's research has shown that the unions that win elections are those that organize workers to take management on, in small ways on the shop floor, even before the vote.

This can mean challenging foremen's unfair actions with a petition or a group visit to their office. It means taking the responsibility to organize and represent fellow workers before the company has ceded the legal right to do so.

By all accounts, organizing committee members were too intimidated even to speak up during Nissan's captive-audience meetings.

UAW President Dennis Williams blamed the loss on a scandal that broke shortly before the election: a UAW vice president was charged with taking enormous bribes from Chrysler.

But Hathorn said the indictment was not an issue in the plant; “none of the antis said anything about it.

And now? “We're going to keep passing out knowledge,” he said gamely. “We’re still going to have our meetings, still talk to employees, still work with the community, and then we’re gonna give it another shot.

“We’re going to tackle all the promises the company made.”

Chris Brooks is a staff writer and organizer with Labor Notes.chris@labornotes.org
Related
Ballots Out in UAW Presidential Run-Off »
Challengers Win Big in UAW Elections; Presidency Headed to Run-Off »
Southern Service Workers Launch a New Union »
From Call Centers to Coal Mines: Swapping Stories at the Alabama Troublemakers School »
Ballots Are Out in UAW Election, with Contrasting Visions of Unionism Up for Leadership »

there are so many negatives to overcome. Unions have to be more aggressive to succeed direct action like the Wobblies the passive approach will never work.