So You Think Your Workplace is Disorganized? 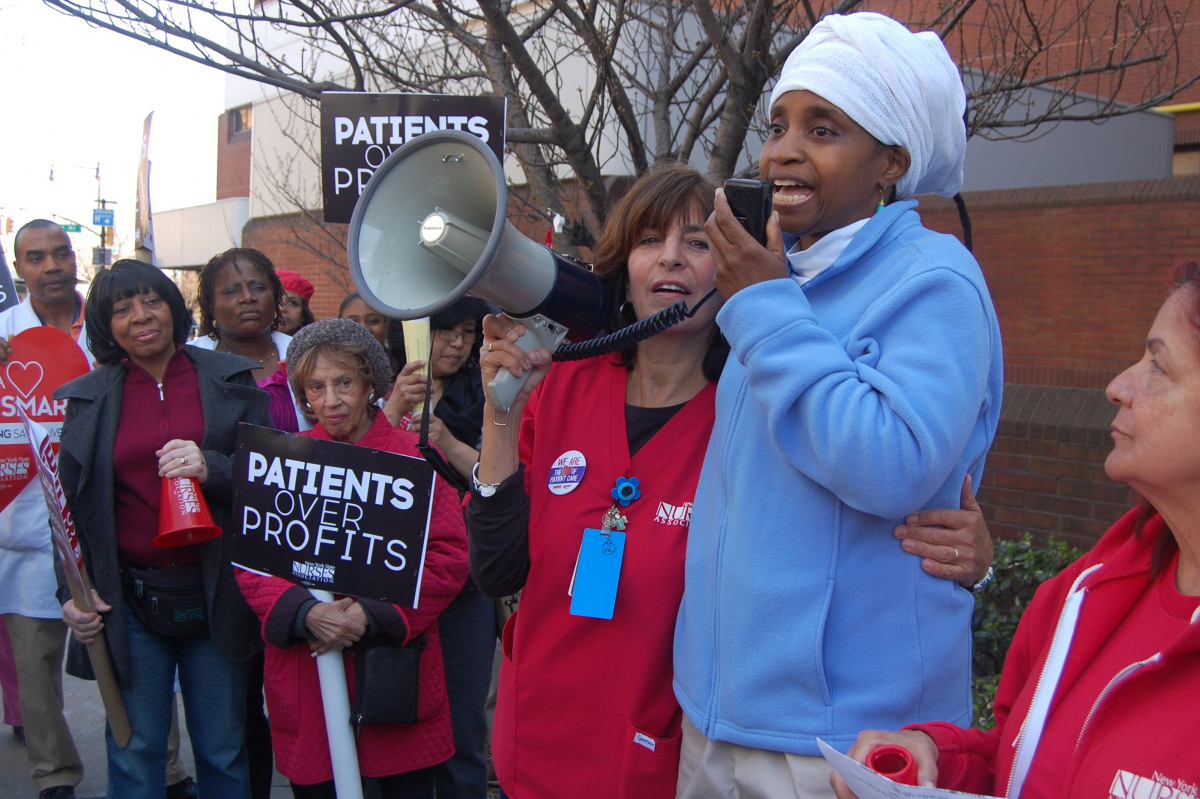 The truth is, you’re never starting from zero. An organizer must learn to recognize the existing networks and natural leaders—who may be hidden in plain sight. Photo: Dan Lutz

This article is adapted from our newest book, Secrets of a Successful Organizer, a step-by-step guide to building power on the job.

Your workplace may feel like a disorganized mess. But the truth is, you’re never starting from zero. There’s organization there already—though it might not have anything to do with the union.

Are there carpools, for instance? Family ties? A rumor mill? If John didn’t show up for his shift, who would have his number and call him up to find out if he was okay? If Monique came out of the supervisor’s office in tears, who would meet her in the break room to give her a hug and ask what happened?

People are social creatures who form bonds anywhere we go. But it’s especially true in a workplace, where we’re under pressure and relying on each other to get things done. We get to know each other’s strengths and weaknesses, and size up who we can trust. We figure out ways to pass around important news.

Organizing starts with the resources you have. Analyzing the power and relationships that exist in your workplace already—understanding who does what where, including in management—is your first step to shifting power.

A strong organizing team should include leaders from every department and shift, and from every social group. Aim for one core-group organizer or activist for every 10 workers.

For instance, in a department of 30 workers, you want three activists—ideally not just any three people, but the three most influential leaders, representing different work or social groups.

Every workplace is organized at least two ways—the way management has designed things and the way workers themselves organize. You should understand both.

There are work groups created by management, people who interact every day because of the work they do. For instance, an Emergency Department is divided into various work spaces (the observation area, the pediatric area), jobs (nurses, paramedics), and shifts.

Different work groups will have different degrees of power on the job, depending on factors such as skill and whether they’re in a position to bottleneck the flow of work. Certain jobs are ideally positioned to be nodes of communication—for instance, in a hospital, the cafeteria cashiers and the transporters who wheel patients around.

There are also social groups, who may hang out at lunchtime or outside of work. Who buys lottery tickets together? Who shares a running joke? Social groups often form among people who have something in common—for instance, smokers, young workers, people who attend the same church, or people who speak the same language.

Both work groups and social groups create connections among their members. You can draw on these connections to figure out strategies that unite your co-workers, and use people’s natural tendency to stick up for those close to them.

Often social groups will form along racial or ethnic lines. Sometimes even work groups are racially segregated, because of management’s hiring or promotion policies. In these cases, you need to be doubly sensitive and make sure that from the start you’re involving leaders from all groups.

When Judy Sheridan-Gonzalez, now president of the New York State Nurses, first started working at Montefiore Medical Center, people told her not to bother trying to engage the Asian nurses—they wouldn’t be interested in the union.

But an issue soon came to light that hit Filipinas hardest. Nurses on H-1 guestworker visas were being threatened that they would lose their visas if they got involved with the union. Some were forced to endure inferior living conditions, including “hot beds,” where a day-shift nurse and a night-shift nurse shared a bed on a rotating schedule.

Gonzalez pushed for the union to offer legal advice—which got an overwhelming response from the Filipina nurses. And learning about the exploitative conditions unified nurses of all backgrounds. Soon a similar situation emerged, affecting Jamaican nurses.

Filipina and Jamaican nurses together led the campaign to put a stop to these practices. Nurses from other ethnicities joined in. After they won, word spread to other hospitals, ultimately ending these practices throughout the region.

Though that was decades ago, Gonzalez says, nurses from many countries continue to count themselves as union activists at Montefiore. It’s one of the union’s strongest hospitals, in part because workers overcame the stereotype that the union is only for certain people.

Every workplace has informal leaders who aren’t elected or appointed; they just are, and they influence others in their group. If you have a message to communicate, reach the leaders of the informal groups. You can bet the word will get out to everyone.

Think about your co-workers, and ask around. When someone has a problem, who do they go to for help, defense, or advice? Who do they ask when they want the facts? Who do they trust, respect, admire? Certain names usually come up over and over. In one hospital, a certain nurse was known on his floor as “the mayor.”

Don’t just ask—watch. Organizer Ellen Norton suggested that you observe carefully when people are together. “We look for workers who can answer co-workers’ questions,” she said. “We observe the dynamics in the room. Who responds? Who defers to whom? Who understands the union? Who understands what the boss is doing? Is everyone mentioning a worker who is not present? I want to meet that person.

“We also look for people who are good judges of their co-workers. How well did they describe their coworkers’ interests and concerns before they brought them to the meeting?”

Imagine a well-loved leader in your workplace has been fired, and you’re planning a sticker day to demand she be rehired.

You have 48 hours to get the word out to everybody and get the sticker into everyone’s hands.

As you look over your results, think about these questions: Visit labornotes.org/secrets to find free handouts you can use in your next stewards meeting, and to buy our new book Secrets of a Successful Organizer, a step-by-step guide to building power on the job.

When management goes on the offensive, who responds in a way that educates her co-workers? Who is able to soothe their fears afterward?

Fundamentally, a leader is someone who has followers. That means there are others who will take an action—sign the petition, wear the sticker, attend the rally, join the strike—when this person asks.

There are usually multiple leaders in a workplace, often tied to the many work and social groups. Different leaders might have sway among the younger workers, the moms, the basketball players, the people who work in a certain department, or the night shift. There might be leaders of different social cliques. Someone might have just one or two followers.

What if you’re not the leader? You probably aren’t—at least, not for everyone. Maybe your friend Ann follows your lead, but you sense that Ben doesn’t trust you. You’ve noticed he always waits to see what Carlos is going to do.

That doesn’t make you a failure. On the contrary, you’re thinking like an organizer. You’ve spotted another possible leader, Carlos.

The people who already have followers are the ones you want to draw into your core group of organizers and the next circle of activists. These are the people you should spend the most time with.

Go out of your way to get to know them. Have good organizing conversations where you mostly listen, learn what they care about, and help them develop the organizing attitude. Time spent with these leaders will pay dividends.

As your organizing continues, you will always be on the lookout for new leaders. In a union drive, Norton said, “we constantly build the organizing committee throughout the campaign. We might give one committee member unsigned union cards, but another co-worker brings the signed cards back. That’s a potential committee member. Who gets their co-workers to wear buttons, come out to leaflet, or march on the boss? They are committee members.”

Most people are both leaders and followers. The union president might look to one rank and filer to be his tech guru and another to navigate city politics. Someone might be the acknowledged leader of her work group but always follow the lead of the chief steward.

Each individual leader doesn’t need to know how to do everything—but a team of leaders, together, can combine the qualities that will make your campaigns succeed.

The strength of any core group will depend on how many people look to its members for leadership. If there are holes in your core group, there will be holes in your participation. For instance, if no respected leader from the night shift is involved, don’t be surprised when you can’t get many night shifters to join the sticker day.

Alexandra Bradbury is the editor of Labor Notes.al@labornotes.org
Mark Brenner is the former director of Labor Notes and is currently an instructor at the University of Oregon's Labor Education & Research Center.
Jane Slaughter is a former editor of Labor Notes and co-author of Secrets of a Successful Organizer.
Related
Steward's Corner: How to Think Like an Organizer »
Steward's Corner: Recruiting and Keeping Volunteers »
How We Turned Bargaining Around at Law360 »
What Are We Doing to Shift the Balance of Power at Work? »
'Nurses Over Billboards': Two-Day Strike Hits Site of New York's First COVID Outbreak »